How to Hunt a Wild Turkey for Your Thanksgiving

In some state’s, there’s still time to harvest the finest holiday feast of all 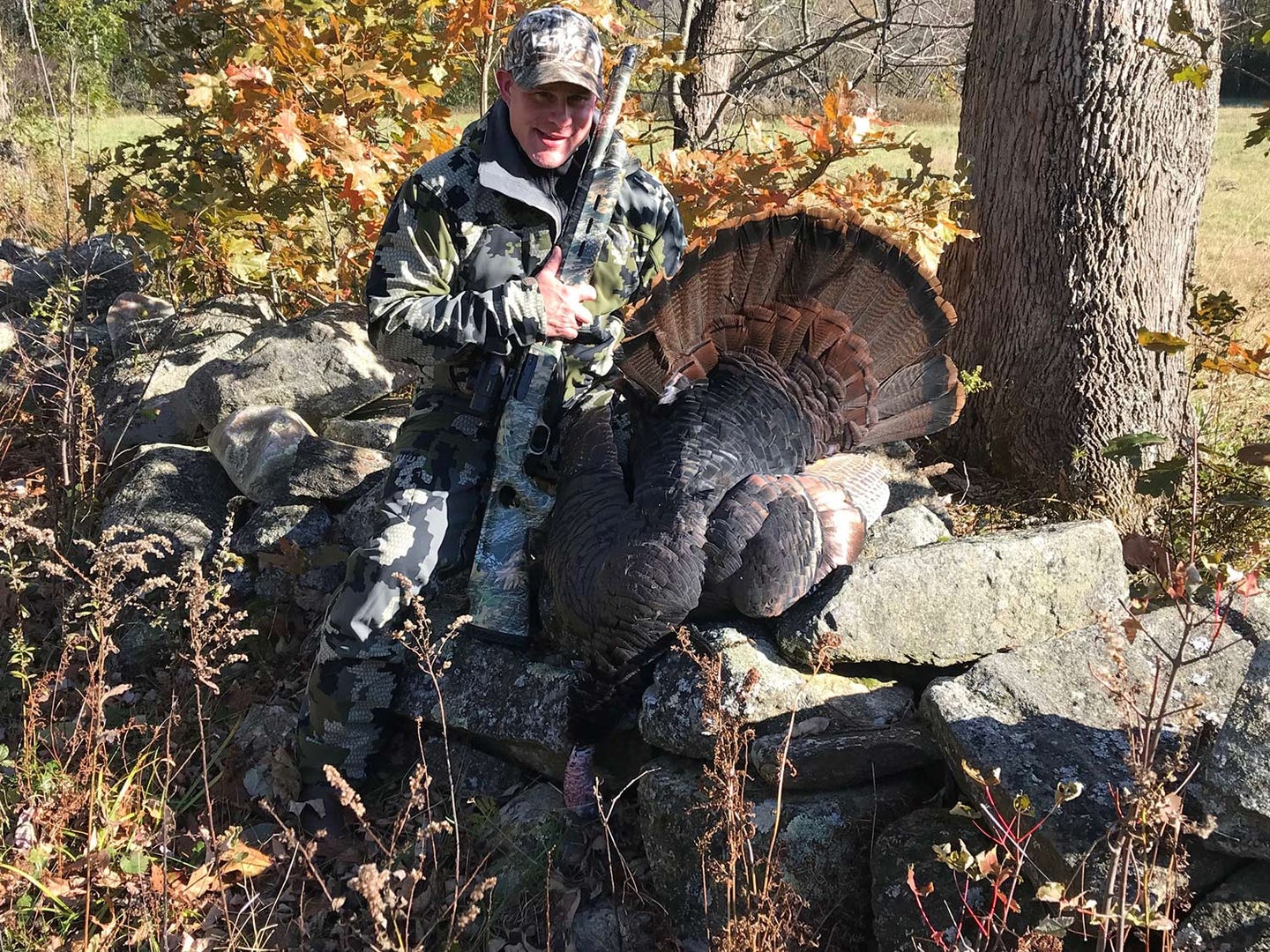 Billy White took this great fall gobbler as the tom, and two buddies, picked grasshoppers from a food plot in the Northeast. Gerry Bethge
SHARE

“Why in the hell would anyone want to hunt a wild turkey in the fall?” I asked. “Hell, they don’t gobble!”

I remembered being that young, inquisitive-yet-naïve hunter just the other day while doing a deep-freezer dive looking for something to roast on Thanksgiving. The COVID-19 pandemic has surely made a mess of things, including ruining the greatest of great holidays. So once the last of my Thanksgiving guests respectfully backed out of the annual celebration, it was time to make a gastronomical back-up plan. Everyone else must have been doing the same thing. There were plenty of giant Butterballs at the supermarket, but no small ones. The chickens were gone, too. Cornish gam hens? Eh.

“Ahh, there it is,” I hollered while digging past the venison and swordfish, reaching for the vacuum-sealed prize beneath. “That’s the bird I killed last fall—perfect. This is the bird that will save Thanksgiving. And he never gobbled once.”

Though a frowned-upon activity by some (ironically spring gobbler hunters, mostly) hunting turkeys in the fall is exhilarating. And the season is still open in some states (see sidebar below) just in time for Thanksgiving, or Christmas for that matter.

“Fall toms may not always gobble,” my buddy and turkey legend Ray Eye told me more than 25 years ago, “but they will, in fact, gobble at times, and hens and poults [usually legal in the fall] are always vocalizing. Toms will also frequently strut as they fight for position in the pecking order of the winter flock.”

Will fall turkey hunting make you forget all about the spring hunt? Thankfully, no. Besides, we don’t have to decide because many states allow both. There are many ways to score on a fall bird, but here are some tactics that have worked best for me.

Like deer in the early fall, wild turkeys instinctually know they must feed heavily to make it through the winter. Bugging in fields and along field edges is a favorite way for turkeys to add protein to their systems until hard frosts hit. I once happened upon a gobbler flock that was ravenously feeding along a lake edge after a killing frost. After examining the crop of the bird I was fortunate enough to shoot, I realized that they were chasing grasshoppers. The bird’s crop was filled with a softball-sized wad of hoppers.

But once the cold limits the food supply, birds turn to soft and hard mast. Again, like deer, turkeys will concentrate on mast and picked cropfields until they have exhausted the supply in a particular area. That’s why many deer hunters have a certain disdain for the birds—mistakenly blaming them for stealing deer food.

So what’s the best way to locate a flock of fall birds? You can ask your deer-hunting buddies about what they have been seeing while on stand, or you can put on a light pair of boots, hit the woods, and look for sign—particularly scratching.

Although you needn’t make fall turkey hunting a dark-to-dark affair, I most often do. I like to hit the woods I’ve pre-scouted just at first light, when birds are the most vocal. Get up on a high hardwood ridge at dawn and listen as you would in the spring. The birds want food, but just as importantly, they want to re-locate their family flock-mates after a long, chilly, and lonely night in the roost. Familiarize yourself with turkey calls and listen intently for yelps, clucks, kee-kees, and gobbles. If you are already close enough to the roosted flock, grab a tree and set up. Do your best to imitate the most vocal bird which will likely be the dominant hen. If you can draw her in, she will bring the rest of the flock with her. If the birds are too far off and you miss fly-down, ease your way in their direction where you can either cut them off or bust them up. They will most undoubtedly be heading for food.

Bust Them Up, Call Them Back

A tried-and-true tactic for successfully taking fall turkeys exploits their desire to remain in family flocks. So no matter if you happen upon a flock feeding on an oak flat or you surprise a group while riding roads in the wood, separating the birds as widely as you can put you in the game. Specially bred turkey dogs, where legal, are best for this, although hard to come by, especially for casual fall turkey hunters.

Once a flock is separated, set up where they scattered and listen. Once the first bird begins recalling with a yelp, cluck, or kee-kee, the game is on. Do your best to imitate that bird. I will often use every call in my turkey vest to get the job done from boat paddle box calls, to diaphragms, to slates. Other birds will likely chime in, but the key is to do your best to engage the most vocal turkey. Often the entire flock will come marching in. If you are hunting with a buddy who also has a tag, shoot your bird but let it lie, and continue to call. This will often allow for an opportunity at a second bird.

This tactic undoubtedly works best on family flocks. Gobbler flocks work on a different timeframe. Although they have a desire to get back together, it might take an entire day, or two, for them to regroup. I’ve had my best success with flock breaking just at dusk. If you break up a flock at sunset, the next morning’s recall is often nothing short of epic.

Safety is of critical importance when fall hunting—especially late in the season. You will more than likely be sharing the woods with deer hunters of some form, including bow or gun hunters. Even if it’s not mandatory, I always wear a hunter orange hat and vest. Where legal, I remove the orange while I’m seated (turkeys still have sharp eyes in the fall), but keep it at the base of my set-up tree so that other hunters in the area can see it.

Because fresh wild turkey for the holidays is always worth it. Pandemic or no pandemic, it’s still the greatest feast of all.

Fall Turkey Seasons, Open During the Week of Thanksgiving 2020

Here are all the fall firearms seasons still open through Thanksgiving. Be sure to check your state’s regulations before heading afield.

The fall archery and shotgun turkey season starts in mid-September and runs through Jan. 31, 2021. The permit is $25 for residents; $109 for non-residents, and all hunters must purchase a $25 habitat stamp, but that price is good for two birds, not one. Youth licenses are $8.

There is no fall season for Easterns in the Lone Star State, but the fall season for Rios is open through Jan. 3, 2021 in the north, Jan. 17 in the south, and Feb. 28 in Brooks, Kennedy, Kelberg, and Willacy counties. There’s also a late January youth season in both the north and south regions. Resident hunting licenses are $25; non-resident licenses are $315.

Although a few zones are already closed, most of Wisconsin (Zones 1 to 5) is still open for the fall turkey season. Resident tags are $15; $60 for non-residents. A wild turkey stamp costs $5.25.

The dates for the fall firearms season in Virginia vary based on your county, so be sure to check the dates for where you want to hunt, but most seem to specifically have a fall firearms turkey hunt timed to coincide with Thanksgiving, with dates open on Nov. 25 and 26 this year. Check out the license fees here.

Other states to check out with fall firearms seasons that are still open for Thanksgiving: Alabama, Florida, Iowa, Montana, New Mexico, Wyoming (in some areas), and more.