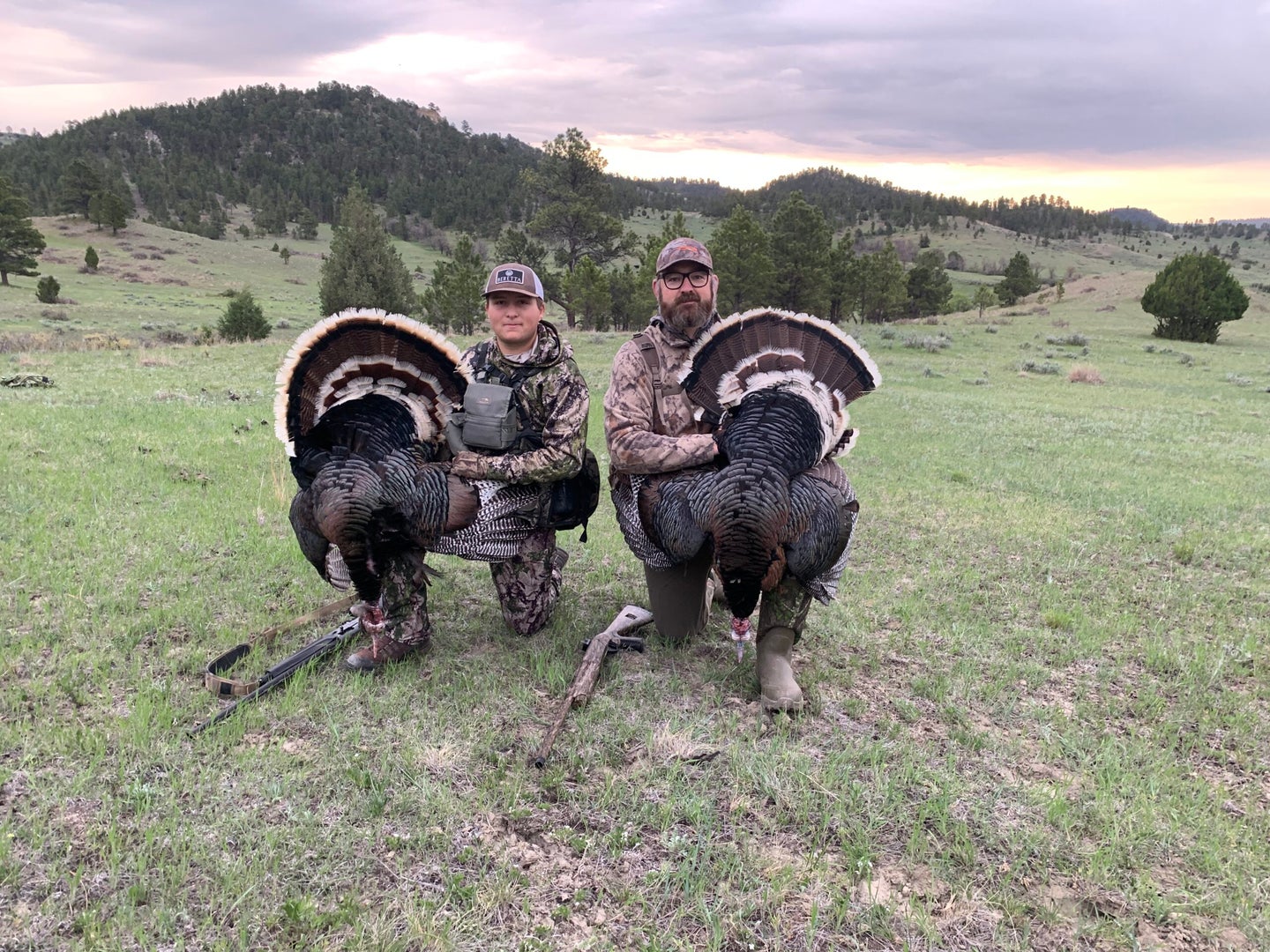 From March to May of 2022, I tested nine different turkey shotshells, shooting more 3-inch, 2-ounce loads (around 200) than most hunters will in a lifetime of chasing toms. I patterned a bulk of the 12-gauge lead and tungsten super shot (TSS) ammunition during the Outdoor Life turkey load test, but also for a turkey gun test and stories on the effectiveness of TSS at distance and the best way to choke TSS.

I also turkey hunted in three different states for longbeards. My first two stops—at home in Illinois followed by Wisconsin with editor-in-chief Alex Robinson—were tough, yielding no turkeys. The gobblers were either silent, henned up, wouldn’t cross a property line, or a mixture of the three. It wasn’t until the last days of May that I punched a tag on a Merriam’s in Wyoming and was finally able to put all my pattern data to the test on a real bird.

The amount of ammo I shot this year combined with hard hunting (and the folks I hunted with) taught me quite a bit about what it takes to kill turkeys more effectively. Here is what I learned.

Determining the Effective Range of Your Turkey Shotgun

The first thing you need to do with any hunting shotgun is to determine its effective range. For turkey hunters, that means pattern work, shooting the shotgun, choke, and load you plan to use for the season on paper to calculate pattern density. Here’s what to do:

The most interesting thing I discovered about TSS this spring was that some turkey loads with heavy shot charges and small pellets patterned better from more open chokes. That goes against conventional turkey hunter wisdom. Most of us buy a tight choke, thinking it will kill longbeards with more authority because the pattern is denser. That is true with some TSS loads. I choked 3-inch, 12-gauge Federal Heavyweight 7/9 shot blend down to a .650 constriction, and it printed some phenomenal patterns inside a 10-inch circle at 40 yards; much better than with a more open .675.

Conversely, I shot Boss Tom 3-inch, 12-gauge No. 9s through the same .650 choke and then the .675 constriction—it patterned better through the looser .675 at 40. But when I shot out to 60 yards, the Boss pattern was denser with the .650. Boss confirmed that their ammo likes a more open choke (.665 to .675) out to 40 yards. They believe it’s tied to the hardness of the TSS shot combined with the small size of the pellets. There are no published studies yet to prove that theory—it’s just what the shotmaker has seen from extensively testing ammo.

But what about the Boss 60-yard patterns that performed better with the .650 than the .675? Well, it would seem from my testing that the tighter choke keeps the pattern together longer, even though it’s not as dense at 40 yards as the .675. I think the openness of the .675 causes the Boss shot string to deteriorate the farther past 40 yards it travels (which is not a knock against it since most hunters consider an ethical shot on a turkey to be inside 40).

Every TSS load in the OL turkey ammo test shot best through a .660 choke paired with a Remington Express 870 (I also shot all the loads through a .655 from a Benelli Super Black Eagle 3 and stock .687 full choke in a Browning BPS) from yardages that ranged from 40 to 90. Considering the Federal loads shot better out of the .650 when I tested it against Boss, you would think it would have performed best in the Benelli with a .655 choke, but that wasn’t the case. It liked the Remington and .660 more.

My takeaway: Finding a TSS load, choke, and shotgun combination that will produce the best pattern at 40 yards inside a 10-inch circle—the industry standard by which turkey loads are measured—is an incredibly difficult task. You must do a considerable amount of pattern work with multiple loads and chokes to yield best results.

Most manufacturers don’t give hunters much (if any) data on pellet penetration, but it’s critical information. After all, a shotshell’s pattern can look damn good on paper, but may not have the energy to kill a bird upon impact unless you are using Tom Roster’s shot lethality table. So, for the OL turkey ammo test, I had my stepdad help me build a recreation of a wooden penetration box former Field & Stream shooting editor Bob Brister invented to quantify the lethality of the shotshells. The box was over four feet long with 27 cardboard slats placed 1½ inches apart. I also put a piece of ½-inch thick drywall in front of the box to slow pellet penetration. I shot each test load into the box from 40 yards and recorded how many slats the pellets penetrated.

I later was told by a ballistics expert that my penetration box—and the ballistic gel tests some manufacturers utilize—are not accurate measures of how a payload will perform on a turkey (or any wild game for that matter). Both tests will only show you how far a pellet can penetrate in a given medium. The composition of the components (cardboard and drywall or ballistic gel) is not anything like the physical makeup of a turkey. Also, it’s likely the cardboard, drywall, and gel are not engineered the same each time, so there is no constant variable, which you need to reliably determine performance. For instance, you could shoot the same load from one set yardage into 10 different blocks of ballistic gel and get 10 different measurements, unless it is calibrated correctly. Also, ballistic gelatin as a means of predicting pellet penetration on turkey, waterfowl, pheasants, and doves has already been disproven by 13 scientific steel versus lead or HEVI-Shot field tests from the 1970s to the 2012. Unfortunately, those studies have not been published to the Internet, so I cannot link to them.

When I shot the Merriam’s in Wyoming at 49 paces (a separate issue I’ll discuss next), I flopped the bird to its back with Federal Heavyweight, which was one of the hardest hitting loads in the turkey test (21 pellets made it through the drywall and all 27 pieces of cardboard of the penetration box). But my turkey rose from the dead, started to run, and needed a second shot to be dispatched. While I breasted out the tom on the tailgate of the truck, I found several pellets sitting on top of the meat, and some just barely imbedded in it. There were also pellets lodged in the neck and waddles of the gobbler. None of that is an uncommon occurrence with any turkey load when it strikes a tom, but it proved (to me) that piercing 27 slats of carboard, and a piece of drywall is not a scientific way of measuring the true effectiveness of a load on a wild bird.

Judging Your Shot Distance Is Critical

After three months of patterning turkey loads from ranges of 40 to 90 yards, I felt confident that I would know when a turkey broke the 40-yard barrier (what I consider to be an ideal shot distance with TSS). But that was not the case in Wyoming. If you are used to shooting eastern turkeys in the timber (like me) it can be quite difficult to judge distances in a wide-open mountain meadow, particularly if it’s 5:30 in the morning and not completely light out.

Here is how my Merriam’s hunt went: After fly down, the longbeard began strutting on a hilltop of the meadow 160 yards away (we measured it using onX afterward). He cut the distance quick, paused at about 70 yards, and then kept creeping towards our setup, gobbling the entire way. I had put a hen decoy to my left at 25 paces, and mentally marked spots in the field where I thought the bird would be in range once I sat down with my back to a pine tree.

After shooting the tom, my friends chapped me for not letting the bird work in closer. I honestly thought the tom was inside 40 when I pulled the trigger, but it was more like 50 yards after I walked it off. I was on the gun the entire time the bird was on the ground, and it can be tricky to know the yardage when you’re looking through an optic or down your barrel for minutes on end. If you have never hunted in these wide expanses, bring a rangefinder, and range a few bushes or trees so you have landmarks where you know a bird is killable.

Read Next: How to Hunt Public Land Turkeys

I ran into some accuracy and pattern density problems this spring while shooting three different 3-inch lead loads and a steel/Hevi-Shot stacked offering through a BPS and the new Remington 870 Fieldmaster with stock full chokes. All the shotshells were either No. 4s or 5s with charge weights of 1¼ or 1¾ ounces. In many cases, I saw sparse patterns and inconsistent pattern placement while shooting on a 35-by-35-inch piece of butcher paper at 40 yards. Some loads simply put too few pellets inside the 10-inch circle to reliably kill a tom.

I can’t blame the shotguns or loads for the inconsistencies because I don’t know which was at fault. And some loads, chokes, and shotguns are simply not meant for each other. But I saw enough poor patterning, that I would not trust a turkey-specific lead load with a full choke at 40 yards without extensive pattern work, which I advocate for with any shotgun pursuit. One way I found to remedy the inefficient patterns was to move up 10 yards and shoot from 30. That gave the payload less time to spread out or impact to the right, left, low, or high of my point-of-aim.

Interestingly, 2¾-inch 1 1/8-ounce Nos. 4, 5, and 6 lead have patterned beautifully for me through stock full chokes at 30 and 40 yards. Many 2¾- or 3-inch bismuth offerings also produce exceptional patterns through a full choke at the same distances. Do the pattern work with your own gun and it’s likely either option will be a turkey killer for you. The recoil will be far more tolerable, and muzzle rise more manageable with these lighter payloads, which is ideal if you need a follow-up shot like I did, or have the chance to double in states where you can shoot two toms per day.