When the weather gets nasty, you should be in the woods chasing toms 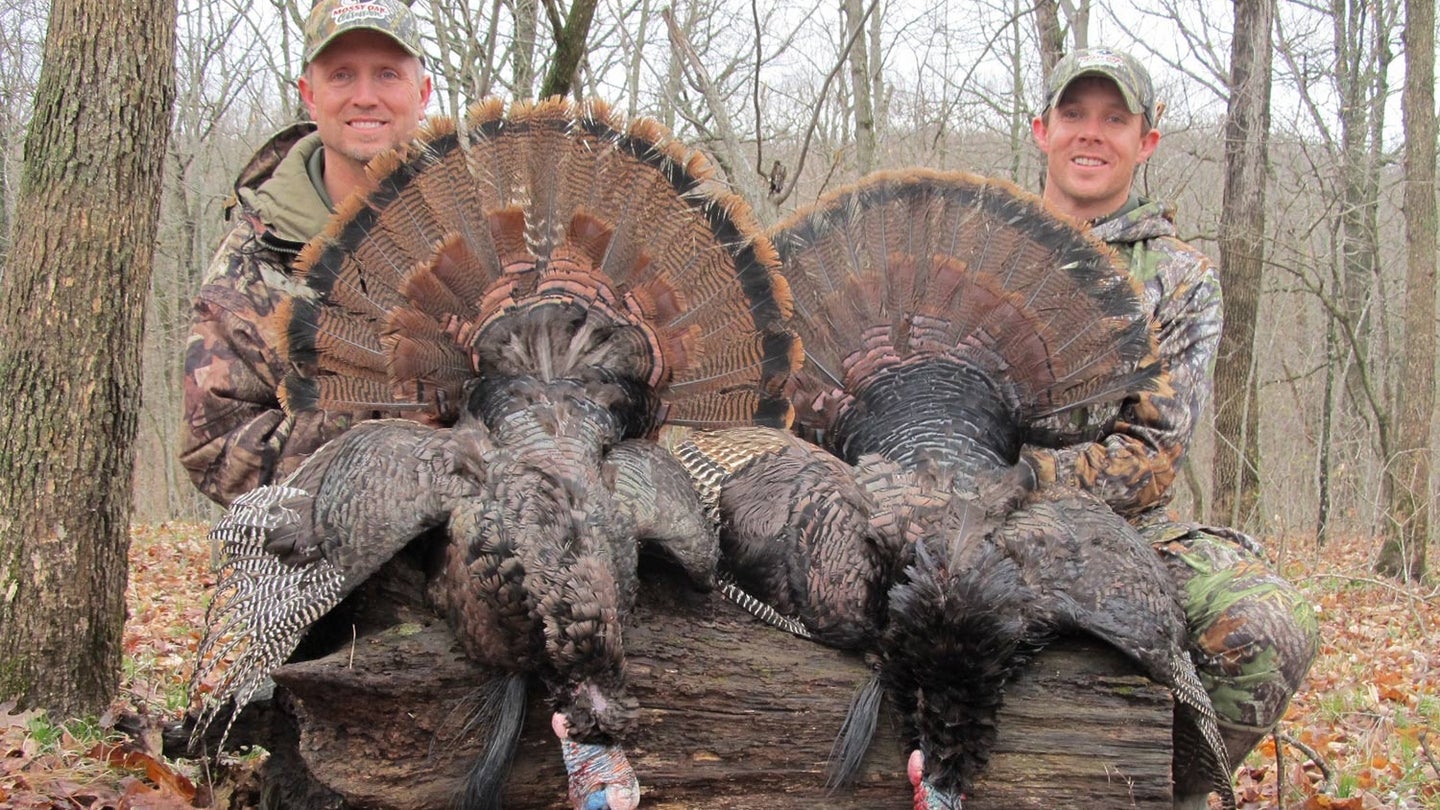 Having patience and calling loud (but sporadically) can kill toms in the rain. Jace Bauserman
SHARE

The rain was falling sideways and the tin roof of the cabin was rattling. Thunder clapped and lightning flashed—for once, the weather man was right. Damn him. I was pissed. My bunk mate, three-time NWTF Grand National Turkey Calling Champion Billy Yargus, must have sensed my tension.

“Don’t worry,” I heard him whisper from under his bed sheets. “We’re still gonna kill them in the morning. It’s gonna be nasty, but we are going, and we will have the woods to ourselves.”

The rain was falling in sheets when we arrived at the field, but the lighting had stopped. Thank God. I snagged a Primos Double Bull blind and started the march across the muddy beans.

“Wouldn’t want to hunt in this without a blind,” Billy said as we erected our ground fort under the cover of darkness. We were cold, wet, and our boots were caked with pounds of black Missouri mud. The turkeys didn’t gobble, which was expected, but an hour after first light a lone tom appeared across the field. I had one of the best callers in the world sitting next to me, and in minutes, the bird was flopping in our decoy spread.

We stayed put in the blind for a few more hours. The rain was relentless, and the wind reached hurricane speeds a time or two. More than once, Billy and I had to hold the blind down to prevent it from taking flight. Still, every 15 or 20 minutes, Billy would call.

“These birds live in extreme weather all year,” he said. “It’s breeding season and though they may not be vocal, they will come to investigate good calling. We just don’t want to overdo it. We will have to crank up the volume to cut the wind and get the sound out over the ridge tops, but mostly, we want to watch and listen.”

There were a few more close calls as the morning stretched on, but nothing wandered within the range of Billy’s Remington 870. Around 11 a.m., with an hour left to hunt, the weather broke. The wind stopped and the monsoon turned to a light mist. Exiting the blind, we moved to a nearby ridge. Billy paused for a moment, dug in his vest, retrieved an aluminum pot call and slid the striker ever so perfectly across it. A tom answered, and he was close.

There was no time to set a decoy, and frankly, being in heavy timber, we didn’t need one. Snuggled against a pair of towering hardwoods, Billy changed to a diaphragm call and before long, I spied the fired-up white dome of the approaching longbeard. His beady eyes scanned the timber, searching desperately for the hen he knew was there. Forty yards quickly turned to 20, and then the 870 rang out. Just like that, we punched our tags on a pair of foul weather toms.

Since my Missouri experience, I’ve hunted toms in a number of miserable conditions. One Nebraska hunt dumped six inches of snow and brought sub-zero temps. Billy’s advice has always proved sound: Turkeys are just out being turkeys. Heed the tips to come, and you can shoot a bad weather tom too.

1. Know The Surface of Your Pot Call

I love a slate call, but on windy days, keep slate pots in the vest. Why? You want your sound to carry, especially if you’re hunting in open country or deep timber. An aluminum face fitted into a walnut or cherry pot will produce high notes that will pierce the wind and carry a good distance. A crystal surface is another great choice. Spend time practicing with your aluminum and crystal surfaces before heading afield. Match them to strikers that produce a crisp, clean, and sexy sound, and you’re good to go. Some of my favorite get-loud strikers include purpleheart, hickory, and birch.

Like a slate, you don’t want your aluminum or crystal surface to get wet. Of course, keeping the striker moisture-free is also a must. I carry heavy-duty Ziploc bags in my vest, and if the conditions are wet, my pot-and-pegs get stored in these waterproof containers. I also carry a towel. It’s inevitable, even if you’re hunting from a ground blind, that a droplet or 10 will find a way onto your call’s surface. Use the towel to dry the call quickly and then rough it up again.

2. Don’t Use Chalk With A Box Call

Most believe box calls that require chalk produce better hen talk. I agree with this camp, but when the weather is wet, just say no to chalk. I always carry a box call that has a lid and a side lined with a waterproof surface. My go-to is the Primos Wet Box. Fitted with a special proprietary formula that allows the caller the ability to cluck, purr, and yelp when the box is wet, a waterproof box call is a must-have for rainy day turkeys.

Several call manufacturers make similar calls, and any will get the job done. As with any piece of calling equipment, making good hen talk comes down to how much time you spend practicing.

3. A Quarter-Strut Decoy Will Do

I like to use full-strut tom decoys as much as the next guy, but found on wet days, a quarter-strut jake placed over a laydown hen to be the ticket. Turkeys seek open areas in the rain for safety reasons. They know if they have to take flight they will need a little extra runway to get that sopping body off the ground.

I’ve watched lots of wet birds on field edges. They simply can’t inflate. So you don’t want an imposter decoy in full strut. I don’t believe their pea-sized brain realizes the decoy shouldn’t be strutting because of the wet weather. However, I do think that because the decoy is in full strut, and they can’t match the posture, intimidation sets in and they won’t challenge the more dominant bird.

My journal tells me over the last five years of spring turkey hunting, only 31 percent of my days were sunny. My work schedule doesn’t allow me the luxury of picking and choosing only the best times to hunt. I have to go when I can. If you’re in the same boat, get a ground blind and a Mr. Buddy Heater and hunt as long as legal time permits.

I realize all you turkey nuts know that on rainy/windy days, turkeys like to hit field edges. Swaying branches and heavy droplets of rain play tricks on their eyes and ears. They know they’re much less likely to detect the steps of an approaching predator. That’s nothing new. Don’t hit the field for a few hours in the morning and bail. Birds will be entering and exiting the field throughout the day. Last year in Nebraska, a hunting buddy and I sat in the pouring rain for nine hours in a ground blind. During that time, 11 toms (some of them may have been the same birds), walked into and out of the field. Two took a load of Federal 3rd Degree to the head. Our best action was between 10 a.m. and 2 p.m.

During that hunt we didn’t hear a single gobble, but when the birds saw the decoys, they came to investigate. We were the only hunters in the woods, and it was one of the best days of turkey hunting I’ve had.

Another benefit to the field-edge grind when hunting in cold weather: Hens are going to want to fill their bellies with carbohydrate-rich grain, which makes fields an all-day hot zone for toms.

5. Take A Walk to Find Signs of Turkeys

I’ve been wet and cold plenty of times. If you’re a serious turkey addict, it’s likely you have as well. If you’re not finding birds, take a walk. The purpose of this walk is not to inadvertently bump into a bird and take a shot as he tucks tail through the timber. Rather, pay very close attention to the sign. Turkeys have a reason for everything they do. If you stumble upon an open area in the timber loaded with tracks, you’re onto something.

After a monstrous Nebraska snow storm, my buddies found loads of tracks and droppings in and around a certain group of cedar trees. Further inspection showed a number of squirrels had stored up piles of corn cobs, and the turkeys had found them. The next day, my amigos killed a pair of birds in those cedars, which would have never happened if they opted to stay in camp.

I like it when my seductive hen yelps are answered by a booming gobble, but when the weather is nasty, toms get quiet. Just because a bird doesn’t answer, doesn’t mean he’s not coming. Like Billy did in Missouri, I send out a few notes every 15 or 20 minutes when blind calling in foul weather. I spend the rest of the time scanning with my binoculars.

It’s also a great idea to try every tactic you know to attract a tom. Twice during our Missouri hunt, Billy pulled a turkey wing from his vest and started beating it against his chest. His goal was to spark some excitement and simulate a fight between two birds. It worked. Though the lone tom wouldn’t cross the barbed-wire fence onto our side of the property (so we couldn’t shoot him), he came close to investigate the sound of the fight.