While the rest of the country is frosty and cold, turkey hunters in Florida are chasing strutters among the palmettos and Spanish moss. 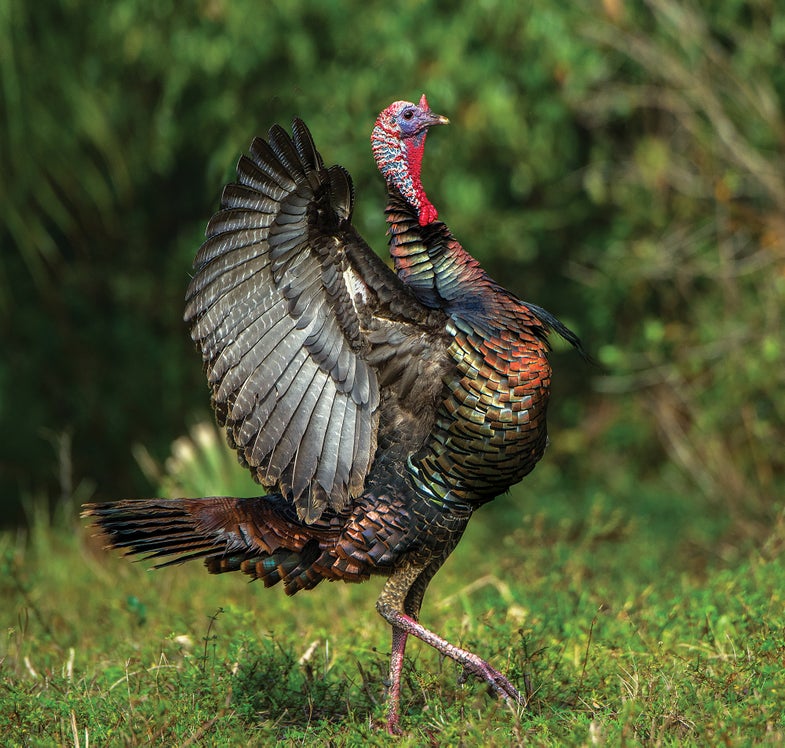 It may be frosty where you live, but in Florida, the mosquitoes are probably out and biting. Bring a Thermacell or serious bug dope. David McCleaf
SHARE

The pinnacle experience for thousands of turkey hunters is the completion of a Grand Slam, killing at least one each of the four subspecies of wild turkeys in the United States. Based on considerations of distribution and abundance—if not behavior—the hardest of the bunch to kill is the Osceola, found only in the peninsular portion of Florida.

With its striking black plumage and long legs, the Osceola is a creature of swamps and dense pine stands. It’s probably the inaccessible, gator-infested habitat of Florida south of Lake Kissimmee that allowed the subspecies to resist human settlement and widespread land clearing in the 19th and early 20th centuries. The blackwater swamps and live oak motts and hammocks south of Orlando remain the best places in the state to find Osceola gobblers, which generally are more comfortable in dense cover than are their cousins to the north, the Eastern subspecies.

But Florida turkeys are as adaptable as wild turkeys elsewhere, and you are as likely to find Osceola gobblers strutting the edges of wide-open cattle pastures and picking bugs out of the grass in orange groves as you are to find them in cypress bogs.

The Florida Fish and Wildlife Conservation Commission defines Osceola turkeys as those distributed south of a line that stretches roughly from Jacksonville to Gainesville. North of that line, including the entire Panhandle, the state defines turkeys as belonging to the Eastern subspecies. South of the line, they are Osceolas, though there is some hybridization of the subspecies along that boundary.

Osceola gobblers are slightly smaller than Eastern turkeys, but they can seem taller because their legs are longer, probably an adaptation for walking through the swamps of their native habitat. The breast feathers of Osceola birds are both darker and more iridescent than those of their Eastern cousins, and the wings of Osceola gobblers are dominated by black barring.

Besides the chance to bag an Osceola gobbler, hunters are attracted to Florida by its early season. Osceola hunting generally runs the month of March, a full month or even two before turkey seasons open elsewhere in the East. The spring weather can be predictably Floridian, with mild mornings and balmy afternoons that seem to coax gobbles from strutters the way juice spurts from a warm orange. Or maybe it just seems that way to a turkey hunter who has traveled to sunny Florida from the frozen North. These Florida birds, though, are not layups. I hunted the Sunshine State for three seasons before I shot my first Osceola. That bird—which completed not only my Grand Slam but also my World Slam (made up of the Eastern, Merriam’s, and Rio Grande gobblers of the U.S., and also the ocellated and Gould’s turkeys of Mexico)—hung up out of range for a full hour before he finally approached my jake decoy.

Previous Osceola hunts had ended the way so many of my other turkey hunts elsewhere had ended—with hens that led gobblers away from my calls, with blown stalks on unresponsive toms, or with incoming strutters that simply vanished into the screen of brush. And, just like spring conditions anywhere, Florida’s weather can turn. The day after I killed my first Osceola on a fine March afternoon, I joined my hunting partner, Linda Powell from Mossberg Firearms, in a ground blind that barely kept out sluicing sheets of rain. Despite the deluge, a soggy gobbler fed out of a line of trees and Linda killed him. The next day we went to Disney World.

Florida has more than 5 million acres of public land, most of it administered either by the U.S. Forest Service or the state’s Fish and Wildlife Conservation Commission. Hunting on most state wildlife management areas is limited by coveted special permits that are distributed in a lottery.

Florida’s best private land is leased to outfitters, and at least for your first Osceola trip, it’s not a bad idea to book a guided hunt. You’ll pay for the access, but harvest rates on private land are higher than they are on public land, and most outfitters offer lodging and additional opportunities for hogs or even private-land alligator hunting.

Florida has a surprising amount of public land, including 1.1 million acres of state wildlife management areas. Most of these properties are managed for high-quality turkey hunting because the number of hunters is limited through a lottery system. Application deadlines for recreational-use licenses that give turkey hunters special access to these lands are generally in early January. Check out the properties and dates at myfwc.com/license/limited-entry-hunts/application-periods/. The state offers limited numbers of what it calls Special Opportunity Turkey Hunts. These are public-land hunts that are managed for high success rates (by limiting participants), and drawing one of these coveted licenses can unlock some of the best hunting in the state.

Because the distribution of the Osceola turkey is limited to Florida’s peninsula, outfitters can charge a premium for guided hunts. Rates for fully outfitted hunts range between $2,000 and $3,000; add hogs or gators for a fee. I hunted with Ted Jaycox of Tall Tine Outfitters, who leases some 30,000 acres of prime Osceola land in central Florida.