9 Spring Turkey Hunting Questions Answered: The Most Underused Call, the Best Time of Day, and the Myth of Uphill Calling

When it comes to spring turkeys, Steve Hickoff is one of the undisputed gurus. Hickoff, 57, is Realtree’s Turkey Hunting... 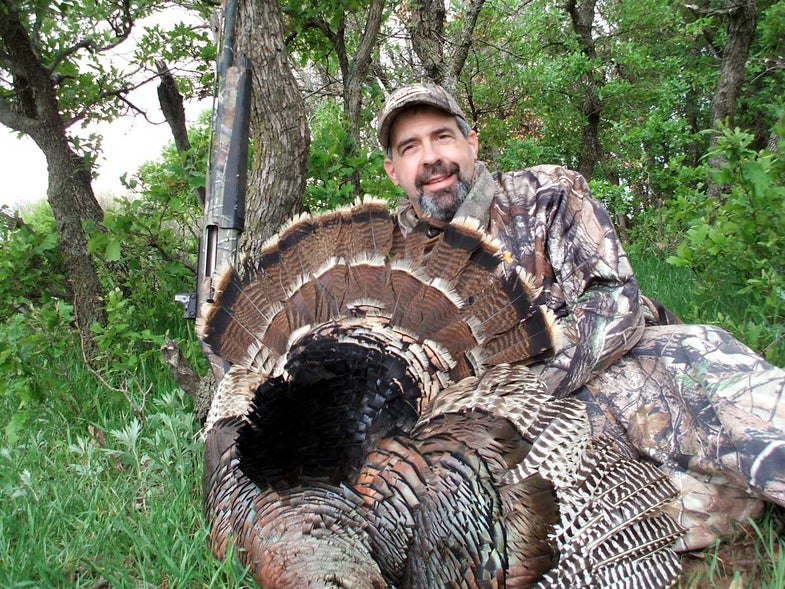 When it comes to spring turkeys, Steve Hickoff is one of the undisputed gurus.

Hickoff, 57, is Realtree’s Turkey Hunting Editor and a columnist for the NWTF’s Turkey Country magazine. He’s been hunting the birds since he was an impressionable 12-year-old back in 1971, in his native Pennsylvania. Now hailing from Maine, Hickoff chases turkeys an six to eight months per year, and over the years has hunted them in more than half the U.S. states, as well as Mexico. He can’t remember how many turkeys he has bagged.

I put to Hickoff some of the turkey-hunting questions I’ve been mulling for years. Here’s our conversation:

Q. What is your favorite two-hour window for closing the deal on a spring gobbler?
A. I would say it’s from 10 a.m. to noon, for a lot of reasons. I am a huge fan of “waiting out” the local hunting pressure. I know some guys are going to be out there at 3 a.m., owl hooting, locating, then hunting hard till 7 or 8 a.m., but then you will find that a lot of those guys experience some burn-out. They might head to breakfast. And then by 9, 9:30 or 10 a.m., you might have the woods to yourself, and you will run into gobblers that have been hammering out calls and looking hard for hens for a while—which can lead to some truly incredible hunts.

Q. Carrying more or less calls—which is the better approach?
A. Just in terms of calling, a lot of guys will talk about going out only with mouth calls. I just love calls of all types, and I like to travel with everything. I’ll carry multiple boxes, slates, scratch boxes, the whole gamut. What I tend to do, and it might be a byproduct of my fall hunting [where lots of calling can be critical], I’ll use a variety of calls at the setup. I’ll run a box while I’m using a mouth call, to sound like multiple turkeys. I like to err on the side of more. If you sound like multiple turkeys you might sound more appealing to a gobbler. They’re just like us, they’re wondering if there might be a party going on somewhere. I’m not saying I call constantly; sometimes silence is better.

Q. I grew up hearing advice that included picking a specific call cadence and sticking with it: Every 10 minutes, every 15. Good advice?
A. I got the same advice when I started, but each bird is different. I never follow any scripts like that, I lean more toward being more aggressive than quiet. Turkeys talk all the time; I guess I’m aggressive because with gobblers, he might come hard, he might come in very slowly. That interaction is what makes it fun. What a tom really wants is for you to go to him—but the whole thing is interaction. My dad once told me, if a bird is hammering hard and suddenly shuts up, get ready because he’s coming. And a lot of the time, that’s what is happening.

Q. Anything to the old saw that you can call turkeys more easily uphill than down?
A. Turkeys walk downhill as well as uphill, and I’ve called them up and down many times. Some of those old sayings are just funny ideas, and deer hunting is full of them as well.

Q. What’s an example of something you’ve learned while hunting all the different turkey sub-species?
A. A good example might be how I handle hunting the roost areas. For Easterns and Osceolas, I hunt the roost very differently than for Merriam’s and Rios. In the East, the habitat is such that those birds stay in a relatively tight area, especially in the spring. You can set up near the roost before dawn, and either tree-call or wait for them to fly down. Out west for Merriam’s and Rios, if you don’t get them on the roost, you had better get your walking shoes on, and hustle to get ahead of them, because those birds can move a long distance from the roost to where they want to be—they just travel a lot. Those birds are going to fly down and get together and move, and they might be moving a half-mile, mile away, maybe to water or food, a distant oak motte.

Q. In your opinion what is the most underutilized turkey vocalization when calling spring toms?
A. I would say gobbler yelping to call in gobblers. The gobbler yelp is distinctly different from a hen yelp; it’s a three-note, raspy deal. It’s a slower, deeper, coarser yelp: Yawp-Yawp-Yawp. To mimic it I like to use a slate or a box, but you can also do it with a mouth call. So why the gobbler yelp? Gobblers communicate with each other all the time; it’s the way they talk to each other. Gobblers like to check each other out, they like to fight each other. In the fall, when we scatter a longbeard flock, or some jakes, it might take several hours for them to return, but they usually come in gobbler yelping. Then it seems like when they get back together they’ll immediately begin fighting, almost as if they feel a need to reestablish dominance within the flock. In the spring a gobbler yelp can mean, ‘Who is out there?,’ and maybe, ‘What are you doing in my territory?’

Q. Say you’re hunting a field edge and a gobbler pops out 70 yards away, looks at your decoy setup and pauses, then ducks back in the woods. Do you follow? And if so, what setup do you look for once inside the woods?
A. I tend to be a more-aggressive hunter, so yes, I will follow that tom. I’ll head over there and try to get ahead of that bird, and I’ll be looking for a spot where if I set up and he comes directly to me, when he appears, he’ll be in range and I can kill him. In other words, he kind of got a little sketchy when he popped out 70 yards away, so I’m going to get where if I can see him, I can kill him.

Q. What is your opinion of the “fanning” technique for hunting spring gobblers?
A. I’ve done a lot of writing on it; I’m not adverse to the activity in a safe situation, but do I think it’s a different hunt than calling birds? Yes. And have I, over the years, used tactics like that? Yes. What concerns me, on a personal level, is that some turkey hunters are getting away from the true essence of the hunt, which is calling turkeys. But I’m all for it if it’s legal, and it’s not legal everywhere. In Pennsylvania, you must bag a turkey by calling only.

Q. One more scenario. Say you’ve been calling for a while and a gobbler appears well out of range. Do you continue to call?
A. If I have some decoys out, I will probably keeping calling. If not, I probably won’t. Once he appears, I like that “tension” of him looking for me. If he comes out at 70 yards, he might pop up into strut, and you probably don’t want to acknowledge him with calls because he might not come any closer. If I have decoys out, I’m hoping he doesn’t see them. And if he doesn’t come closer, I might let him walk so he’s no longer in sight, and try calling him in again. I think guys are too fixated on killing a bird rather than hunting a bird. I might let that bird walk, and hook around him and start calling again, and he might come in again. He came to the call once, he’ll likely do it again. But sometimes all that activity calls in another hen, and you can’t beat that competition, and that’s just the way it is. But you’re never done. If you don’t kill a bird and it walks off, my advice is don’t give up on it.