Anyone who’s a fan of the survival television show Dude, You’re Screwed (as I am), knows full well who Terry... 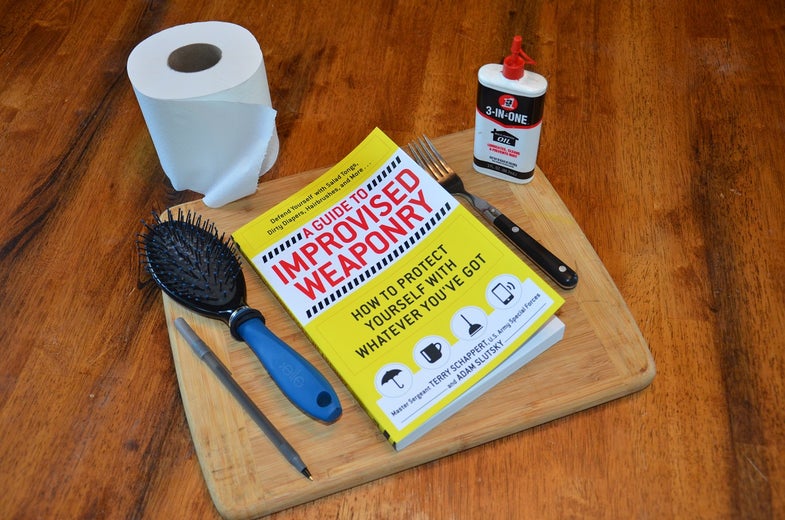 Anyone who’s a fan of the survival television show Dude, You’re Screwed (as I am), knows full well who Terry Schappert is. He’s the salty Green Beret on the show with a soft spot for dogs. So I was pleasantly surprised to see a Tweet a few weeks ago announcing his new book, A Guide To Improvised Weaponry. Who better than a survival-savvy Green Beret to show us how to convert 100 mundane and seemingly harmless objects into lethal weapons? But does the book cut the mustard? And would it teach me how to kill someone with a bottle of mustard? I had to find out.

The tone of the book is set from the start, with one of the best dedications I’ve ever read: “To all the foreign enemies, street thugs, belligerent drunks, and other assorted threats that have come my way – thanks for keeping me on my toes, and my sincerest wishes that you mend your ways or meet your maker.“ The book just gets better from there. The makeshift weaponry is listed alphabetically, from aerosol cans and ashtrays to water bottles and windshield wipers. Schappert’s clever and often funny book, co-authored with Adam Slutsky, is packed full of bizarre tactics that can turn those simple objects into complex handheld and thrown weapons. Although there’s great variety among the items covered, some common themes emerged after reading a few dozen pages. One of those themes is that anything can be a weapon when used in an unorthodox and surprising attack. Another theme is that distraction can play a major role in evasion. A third theme is to forget about the rules. Street fights don’t have them, so don’t hinder yourself by “fighting fair.”

The beauty of the various tactics is that they would be easy to recall and perform in a stressful situation. However, a bit of fact-checking would’ve been useful in a few cases, in particular with the flammability of motor oil. In one section, we are instructed to light a quart oil on fire for various reasons, but cold motor oil won’t ignite with a lighter or match. Hoping I was wrong about this, I tried and failed. On cloth, cotton balls, or paper towels, however, motor oil will light and burn well, but when it’s simply poured on the floor or ground, you’re not going to get it to light for love or money. Other than that, I found no problems with the info provided.

For me, the most eye opening part of the book was the specific tactics for the individual objects. Sure, most of us would instinctively think to spray a bad guy in the face with a fire extinguisher or smash him in the head with a coffee mug. But who would think to chuck a flaming roll of toilet paper at a foe, or chop them in the throat with a clipboard, or use a bag of dog poop as a thrown weapon/distraction? A Green Beret would think these things. This handy DIY self-defense book retails for $15.99 in the U.S. ($17.99 in Canada) and I think it would be a great addition to anyone’s home library.