The largest python ever documented in Florida history has been captured 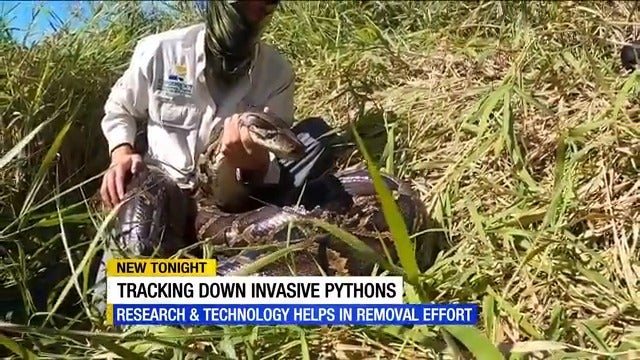 A python record has been recorded in Florida.
SHARE

Included in that cumulative one-county-only haul since 2013 are the heaviest female and male pythons on record in Florida: 185-pounds [captured most recently] and 140-pounds, respectively, according to Naples biologist Ian Bartoszek, and reported by South Florida ABC7-TV.

Bartoszek is an Environmental Science Project Manager and Wildlife Biologist for the Conservancy of Southwest Florida. He and his team have been monitoring invasive pythons for years and have just released the largest scientific study on the massive reptiles.

The biologists fitted 80 pythons with radio trackers, with a focus on 25 snakes. Python movements were monitored and used to help removal of additional snakes.

Over 1,000 snakes were removed and brought back to the Conservancy’s snake lab in Naples. Most of them were females, which can average laying 42 eggs per breeding cycle.

Pythons have thrived and multiplied throughout much of South Florida, especially in and around the Everglades. Bartoszek’s work has been done in Collier County, one of many counties in the region infested with pythons.

“Our study area happens to be right on the edge of town,” he said. “We’re not deep in the Everglades.

“We have an invasive apex predator [pythons] that’s causing a considerable disturbance in the ecosystem.”

Bartoszek refers to Burmese pythons as an unfortunate byproduct of the pet trade. He believes the snakes got their start in the wild as either escaped pets or were purposefully released.

Pythons have completely altered the South Florida natural environment, decimating small animal populations, and competing with endangered Florida panthers and other animals for food and habitat.