The Invasive Spotted Lanternfly Is Spreading. Here’s How You Can Help

Another invasive is spreading fast, posing a serious danger to important fruit crops, trees and plants 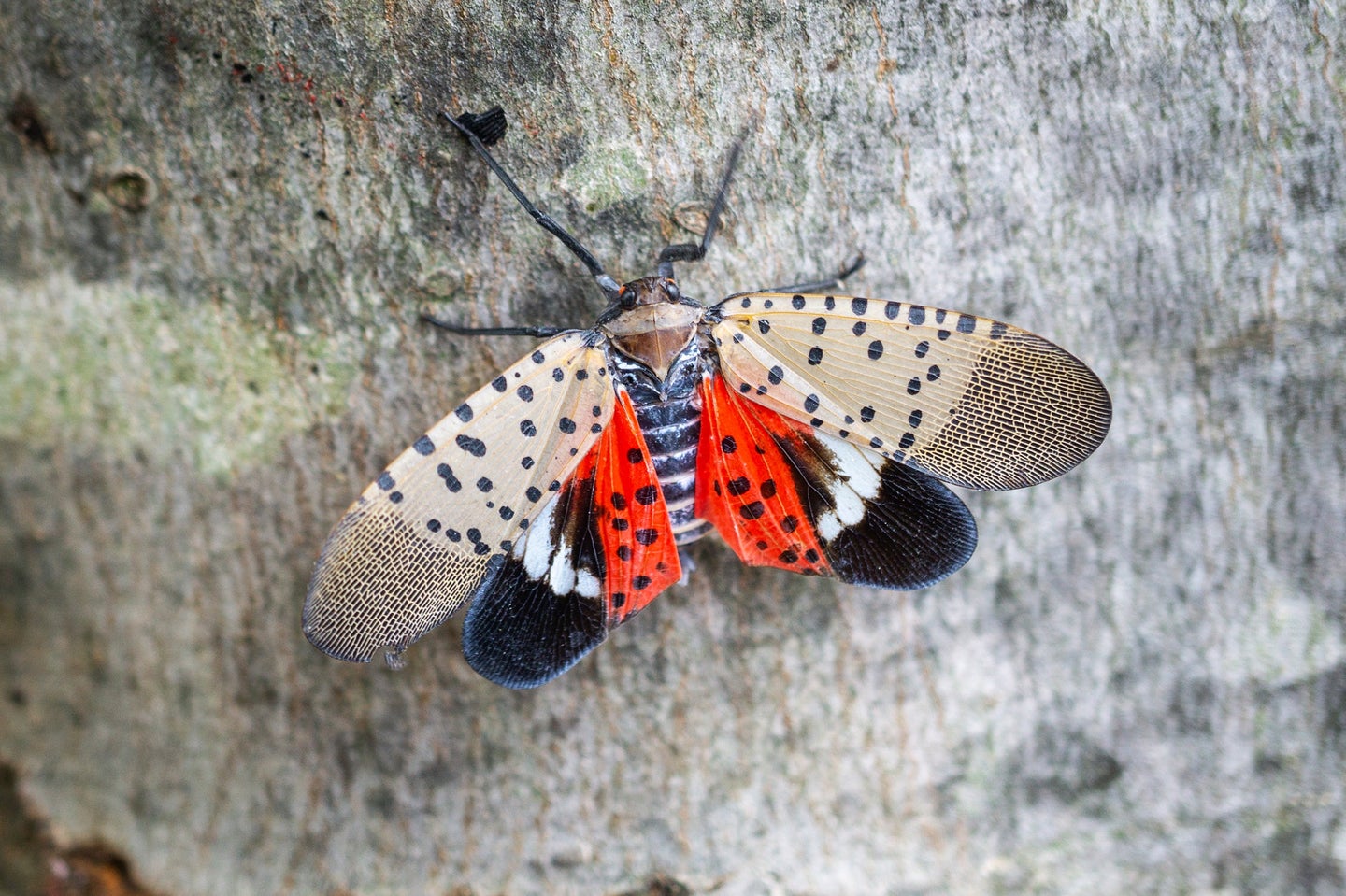 The adult lanternfly is spotted with bright red and black patterning. Oregon Department of Agriculture
SHARE

The winged spotted lanternfly (Lycorma delicatula) pest is native to Vietnam, Indian, and China, but in less than a decade the invasive insect has spread to nearly a dozen U.S. states, where it’s posing serious threats to vineyards, orchards, and hardwood timber in much of the Northeast and Middle Atlantic State region. The lanternfly was first detected in Berks County, Pennsylvania, in 2014, according to the USDA. Since then, Pennsylvania vineyards have suffered considerable damage in high-infestation areas. Those infestations have prompted Pennsylvania’s Department of Agriculture to issue quarantines in multiple counties for the pest. New Jersey’s Somerset and Hunterdon counties are also under quarantine.

The lanternfly can damage hardwood forests by making plants vulnerable to disease, as well as related agricultural and tourism industries. New York’s annual yield of apples and grapes—a combined value of $358.4 million—could be “greatly impacted” by lanternfly infestations, says the New York Department of Environmental Conservation. Other states that have reported spotted lanternfly damage include Connecticut, Delaware, Indiana, Maryland, Virginia, and West Virginia. The lanternfly has also been found in Maine and Ohio.

This month, the invasive bug has been detected in Rhode Island, reports the Rhode Island Department of Environmental Management . The DEM says the lanternfly feeds on a wide variety of agricultural crops and several native species of plants and trees including maple, walnut, and willow.

Worse still, the insect is likely to keep spreading. A dead spotted lanternfly was recently discovered in a shipment of planters from Pennsylvania to a nursery near Corvallis, Oregon, reports the USDA. In Oregon, the lanternfly would pose a threat to tree fruit and grape production, says the Oregon Department of Agriculture. Grapes for wine are valued at more than $238 million annually in Oregon. The invasive pest isn’t picky, and will feed on a broad range of more than 70 plants, including fruits like apples, cherries, peaches, pears, and plums, as well as hops, oak, pine, poplar, rose, and walnut.

Insecticides are effective at killing the insect, but they are expensive and of limited use because of constant re-infestation from the spotted lanternfly dispersing to surrounding vegetation. Signs of infestation include sap oozing from tree trunks; 1-inch-long, brownish-gray or brown-and-scaly egg masses; and what’s called a “honeydew” build-up under plants. Lanternflies excrete honeydew, which encourages the growth of black sooty mold.

“Although native insects also secrete honeydew, the size of SLF and the large populations that congregate in an area result in large accumulations of it. The sticky mess and the swarms of insects it attracts can significantly hinder outdoor activities,” says the New York DEC. “In Pennsylvania, where SLF populations are the densest, people can’t be outside without getting honeydew on their hair, clothes, and other belongings.”

Read Next: Biologists Have Discovered a New Way to Control Invasive Carp

The spotted lanternfly looks like a large moth. The Pennsylvania Department of Agriculture notes that an adult lanternfly is one-inch long and a half-inch wide when resting, with tan, semi-transparent forewings, black spots, patches of red and black, and a white band and yellow-and-black abdomen. The spotted lanternfly in its immature stage appears black with white spots, with the red patches developing as the bugs mature. Adults show up in summer and, in autumn, adult lanternflies lay 30 to 50 of the 1-inch egg masses on tree trunks, firewood, rocks, and vehicles.

Hunters and anglers can help prevent the expansion of the spotted lanternfly’s range by learning to identify the insect, inspecting gear and firewood, and reporting sightings where appropriate. Destroy any eggs or insects that you come across, as well as the invasive Tree-of-Heaven host plant.