The collaborative, multi-year project seeks to gather important data about juvenile moose in the Adirondacks 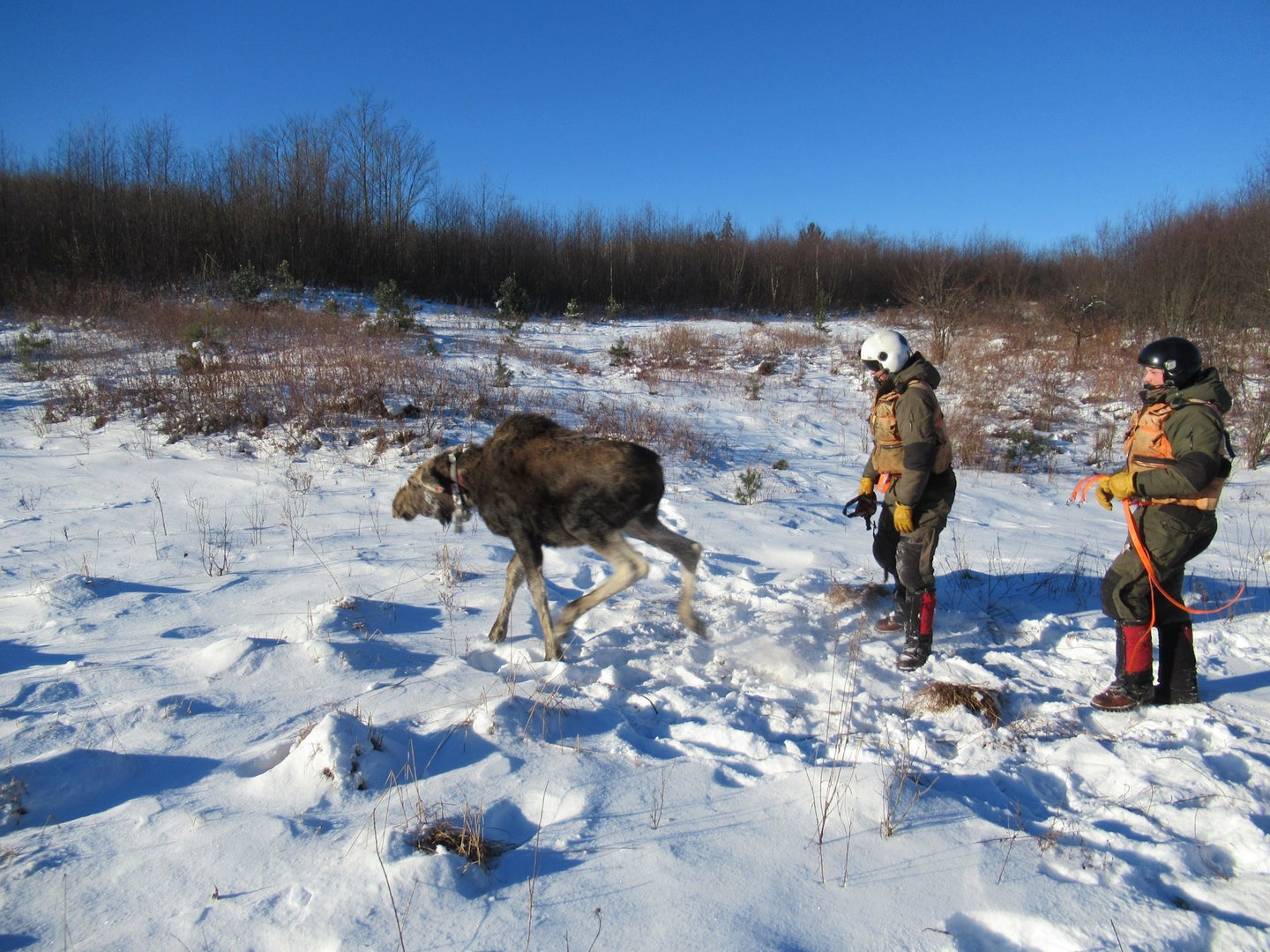 Researchers got started on the multi-year project by fitting 14 juvenile moose with GPS collars this winter. Photo courtesy of New York Department of Environmental Conservation
SHARE

The New York Department of Environmental Conservation has announced the start of a new moose research project in the Adirondacks. The ambitious, multi-year project aims to gain a better understanding of moose populations in the Adirondacks, and the factors that are currently limiting their growth.

Unlike many of the state’s past moose studies, which have looked exclusively at adult moose, the Adirondack Moose Research Project will focus on calves and juvenile moose in the region. Researchers have already fitted 14 juveniles with GPS collars so far this winter, and the state plans to expand this number in the years to come in order to obtain more data on moose activities, movements, and mortality.

The new research project is a collaborative effort, and the DEC has partnered with researchers from the New York Cooperative Fish and Wildlife Research Unit, the College of Veterinary Medicine at Cornell University, and the State University of New York College of Environmental Science and Forestry. The DEC has also contracted with Native Range Capture Services, a Nevada-based company that specializes in the capturing, transporting, and monitoring of wildlife. Funding for the project is provided by a Federal Aid in Wildlife Restoration grant from the U.S. Fish and Wildlife Service.

Wildlife biologists hope that by monitoring these calves as they transition into adulthood, they can learn more about the factors limiting moose population growth in the state. The DEC mentions that parasites such as winter ticks and brain worm are major management concerns for moose in the northeastern United States.

Commonly known as “moose sickness”, brain worm is a parasitic round worm that disrupts a moose’s nervous system and is oftentimes fatal. According to information provided by the DEC, infected moose typically die from paralysis or an inability to feed. The infection can also cause aggressive behavior and moose may display a total lack of fear, which sometimes results in them being struck by a car or forces wildlife agents to shoot them to protect the public.

Read More: If Chronic Wasting Disease Is Fatal, Why Aren’t We Finding CWD-Killed Deer in the Woods?

White-tailed deer are the normal hosts for the parasite, and as such, they are not affected by it. Biologists believe that the jump from deer to moose typically occurs when round worm larvae are excreted in a deer’s fecal pellets. Slugs then carry the larvae from deer pellets to other plants, and moose will sometimes inadvertently eat the infected slugs while browsing on these plants.

Researchers will test these theories—and others—by sampling deer pellets and monitoring water sources that are utilized by both moose and whitetails. Trail cameras that have already been deployed by researchers will also work in concert with GPS collars to better reveal the range overlap between the two species.

“The moose population in New York is at the southern edge of their range in the United States and has not grown as expected since moose recolonized the State in the 1980’s”, says Angela Fuller, who leads the New York Cooperative Fish and Wildlife Research Unit. “We have a fantastic collaborative research team focused on unraveling the complex factors that could be limiting moose population growth. Information from the GPS collared moose calves, paired with data collected on parasites and predators of calves will allow us to better understand threats to survival and moose health.”