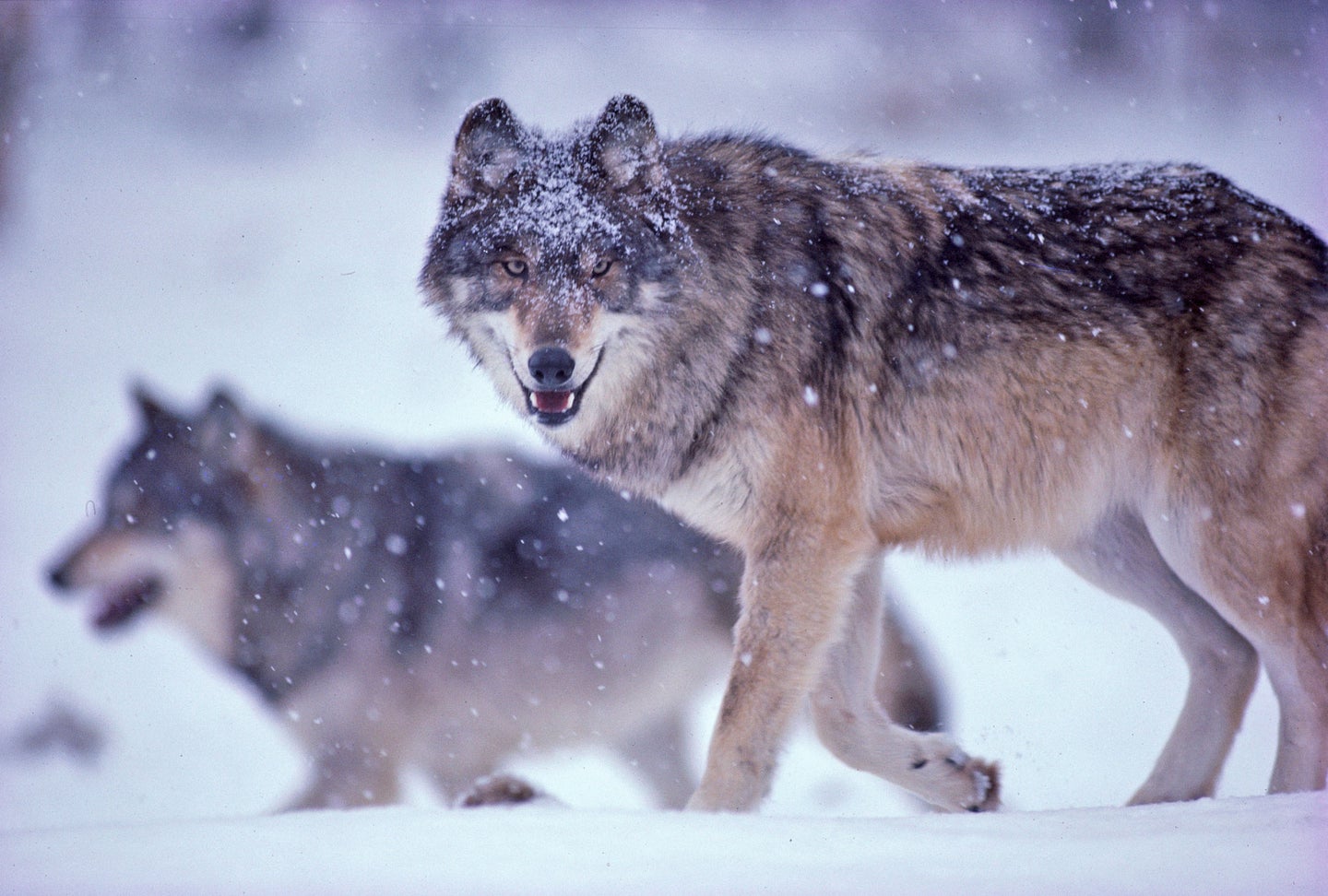 There's no established population of wolves in New York, but last year one was killed by a hunter. Getty Images
SHARE

Last December, in central New York, a hunter shot a critter that looked like a giant coyote. As in, an 85-pound coyote in an area known for coyotes that usually average about 40 pounds.

Three DNA tests later, that really big coyote turned out to be a wolf.

It wasn’t the first time a wolf showed up in New York State since the last known wolf was shot in the late-1800s, and it probably won’t be the last. But according to New York Department of Environmental Conservation officials and plenty of hunters, one individual wolf, particularly an individual male, does not a population make.

“You basically need the females present in order to actually have interbreeding and ultimately, with the case of wolves, having pack formation,” says DEC’s wildlife diversity section head Daniel Rosenblatt in a pre-recorded video. “The best way for a new population to establish in New York was if a pack … moved into New York. Given the fact that, at least from the Great Lakes population, the nearest pack is several hundred miles away, that doesn’t seem likely in the near future.”

That perspective hasn’t stopped wildlife officials, hunters, trappers, and environmentalists from offering varying opinions on the possibility of wolves once again living in New York. But within all that debate, one truth remains: wolves will only survive in the wilds of New York and New England if humans allow them to.

Which Wolf Species Could Come to New York?

Wolves historically roamed most of the northern hemisphere, including the northeastern U.S.

Smaller Mexican wolves lived in the southwest, red wolves ranged across most of the eastern U.S., and eastern wolves lived in the Northeast into Canada. In the middle of the continent and ranging north were gray wolves. A continent-wide extermination campaign against wolves in the 1800s and early 1900s resulted in the near elimination of most of those species.

And as wolf numbers plummeted, coyotes filled the void. They took advantage of unoccupied range, and in the East, coyotes began breeding with what few lone wolves remained.

Fast forward 150 years, and you’ll understand why that 85-pound wolf required three DNA tests for final identification. The species that was considered the eastern wolf (which now only lives in Ontario) may no longer exist in its original state.

“Although there was once a distinct species called Eastern Wolves, a long history of hybridization among Eastern Wolves, Grey Wolves, and Coyotes, has led to a hybrid taxon that is evolutionarily distinct from other canids,” according to the Wolf Conservation Center based in South Salem, NY. Those wolves got a new name, Algonquin wolves, and some protections under Canadian law.

The global scientific community, however, still hasn’t decided if eastern wolves are a subspecies of the more common gray wolf or its own species like red wolves. A scientific paper published in 2015 found eastern wolves are genetically unique enough to be their own species. The Fish and Wildlife Service says otherwise. Though in an email to Outdoor Life, a spokesperson wrote “the taxonomic status of gray wolves in that part of North America has yet to be resolved.”

So why does any of this matter?

Because if eastern wolves are their own species, they would require separate federal protections from gray wolves similar to those for red and Mexican wolves. As it stands, lumping eastern wolves into the same category as gray wolves lessens any need to encourage their reestablishment in an area that federal officials say isn’t required for the gray wolf species to persist—and it’s an area that’s no longer well-suited for them.

Could Wolves Actually Make a Comeback in the Northeast?

Despite the wolf killed recently in New York, and reports of other wolves roaming into New York over the past couple decades, wolves likely aren’t returning to the state in any viable numbers, experts say. At least not anytime soon.

Sure, lone wolves will continue traveling the gauntlet of human occupation over hundreds of miles from the Great Lakes. And a couple may cross the St. Lawrence River in areas where it freezes in the winter, but wolves require numbers to persist.

Wandering on their own isn’t the only way species return, though. Humans could decide to bring them back.

Right now, because gray wolves once again remain on the endangered species list everywhere in the country except Montana, Idaho, Wyoming, and portions of Utah, Washington and Oregon. The feds would have to be the ones to reintroduce wolves to New York. They’re not making plans.

“The Canis lupis is still listed as protected under the Endangered Species Act, and until we resolve that ongoing litigation this is where we are,” says Vanessa Kauffman, a U.S. Fish and Wildlife Service spokesperson.

If wolves are once again removed from the list, the state DEC could decide to reintroduce them. State officials aren’t making plans, either.

Lastly, voters in at least one state are taking reintroduction into their own hands. In 2019, hundreds of thousands of people in Colorado signed a petition demanding the state bring back gray wolves (even as a pack began forming in the northern part of the state from wolves trickling down from Wyoming). The petition went on the 2020 ballot, and Colorado voters decided by a very small margin to bring back the apex predator through reintroduction.

David Leibig, executive director of the New York State Trapper’s Association, says wolves returning on their own is one thing, but he isn’t interested in anyone bringing them back.

Even John Davis, a rewildling advocate on the Adirondack Council, says the best way for wolves to return to New York would be on their own.

“We need to do a very good job of protecting wildlife connections and educate each other and hunters and get protections on coyotes and other large carnivores to encourage natural recolonization,” he says.

“If all you did was pick animals up and move them into an area where, for whatever reason, they’d been extirpated, without addressing the causes that led to that animal being absent, there’s no reason to expect those animals to stick around,” Rosenblatt continues in the video DEC released on the recent wolf (DEC declined to provide an interview with Rosenblatt, but did answer some questions via email).

Basically, he says, no habitat means no species. And no public support for a species means no species reintroduction. Does New York have the habitat for wolves, and would New Yorkers let them live long enough to become re-established?

Depends on who you ask.

The Fish and Wildlife Service says no, New York doesn’t really have the habitat or social tolerance to allow for an established population of wolves (which means at least two breeding pairs each with its own pack). The Service cites a 1999 paper that studied the possibility of reestablishing wolves in New York for its current position.

However, Davis argues there is plenty of habitat in the Adirondack Park, a 6-million-acre park larger than Yellowstone, the Everglades, Glacier and Grand Canyon national parks combined.

“It’s huge, but it’s a park with people,” he says. “It has 102 towns and thousands of miles of road. Wolves are going to encounter people.”

That’s why he wants wolves to return on their own, through natural channels of restored habitat after educational campaigns foster public support. He and others have cited the rewilding of countries like Croatia, Romania and Italy where wolves have reoccupied areas in relatively close proximity to humans.

“There are wolves and brown bears within 50 miles of the Vatican,” he says. “What we have not achieved here is social tolerance. We need to build that acceptance.”

If wolves returned on their own while gray wolves remain on the endangered species list, the DEC and the feds would be in charge of managing them. That would require a management plan, public input, and a whole series of meetings and decisions that haven’t yet been made, says Scott Becker, the Service’s Mountain-Prairie Region Wolf Coordinator. Right now, the feds don’t even have a wolf biologist overseeing New York or New England.

If and when gray wolves lose federal protections, any wolves returning to New York would be the purview of the DEC. Regarding wolf management, the most DEC would say is this line from an email:

“DEC wildlife management efforts are driven by science and research to determine where animals are established, resources being utilized, and any necessary regulatory controls.”

In other words, the DEC does not seem to have a plan in place to manage wolves, at least not one that they’re sharing.

What Would it Mean for Hunters and Trappers if Wolves Returned?

If the DEC and the feds don’t have a good answer of what it would look like if wolves returned to New York, hunters and trappers are similarly unsure.

“There’s no likelihood. I don’t believe the DEC is in favor of it at all,” he says. “You know the way politics work, anything is possible. But I doubt they’d introduce them.”

Chuck Parker, president of the New York State Conservation Council, is even less concerned: “I don’t think the impact of wolves right now would be greater than coyotes.”

The Conservation Council does not support wolf reintroduction but also doesn’t have a formal opinion on wolves returning on their own.

Todd Waldron, the former chair of the New York chapter of Backcountry Hunters and Anglers, thinks the discussion is mostly just fascinating to follow with few practical implications.

He sees the point that New York has a massive area of relatively wild land, but also understands that wolves are not likely to stay put, and the rest of New York has people and agriculture. Those two things don’t mix well with wolves. The wolf that was killed in December, for example, wasn’t shot in Adirondack Park, but in southcentral New York, near Albany.

The hunting community, he feels, would be split about wolves reappearing. Some would fear for whitetail deer, the hunting staple of New York, but others may see the value of wolves in a healthy ecosystem.

But, he says, “If we’re talking generalities, hunters will be concerned.”

All three wonder what role hybridization would play in any wolf population. Some wonder if eastern wolves could even be reestablished with the number of coyotes living in New York. At the same time, many biologists argue that the purity test—if a species contains hybrid DNA—isn’t all that useful in the conservation of wildlife.

For Davis, a wolf comeback in New York would mean a comeback for the ecosystem.

“In general, ecosystems are healthier when they have the top predators in part to eat some of the herbivores—moose and beavers and deer—and possibly to regulate their behavior,” Davis says. “If you have wolves and cougars on the landscape, other species don’t tend to congregate and target certain areas as much.”

It’s why he is focused on helping New Yorkers understand the importance of a complete ecosystem, one with species like wolves and large cats.

But he knows that any wolf population in New York depends on human acceptance, something the 1999 report flagged as the biggest impediment to reintroduction in the state.

“Whether humans in the (Adirondack Park) are tolerant of wolves is not the focus…” the report reads. “Based on other wolf reintroductions, a relatively few individuals can cause a reintroduction effort to fail.”