Canadian wildlife officials have tried hazing and relocating the well-known grizzly away from a major highway, but the bear keeps coming back anyways 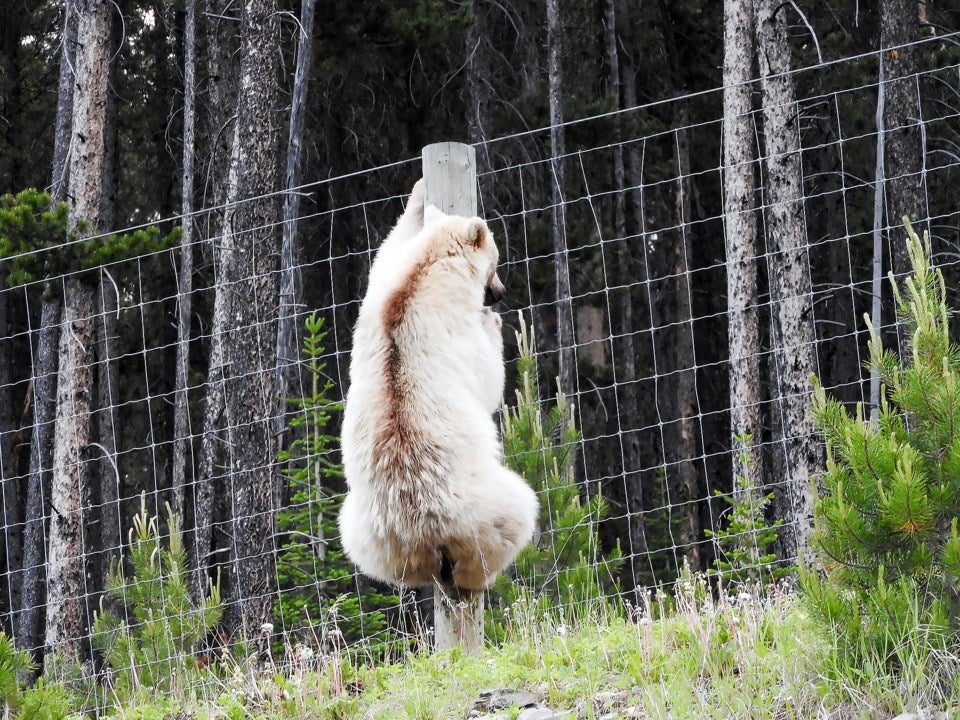 Wildlife officials in Canada are working to save a rare, all-white grizzly bear from being struck by a vehicle, according to Rocky Mountain Outlook. The bear likes to hang out near the highway between Banff and Yoho National Parks, and try as they might, they can’t seem to scare it away.

Last summer, officials with Parks Canada successfully captured, GPS-collared, and relocated the bear after it was spotted near the Canadian Pacific Railway. But the griz eventually wandered back to the front country and has been spotted multiple times along the busy Trans-Canada highway in recent weeks, proving that no matter how hard you try, you can’t control a wild bear.

“Because the bear was relocated within its home range, Parks Canada wildlife specialists anticipated that its return to the highway corridor was a possibility,” Parks Canada spokesperson James Eastham told reporters.

The all-white, female grizzly became a well-known figure in Banff back in June of 2020, when people began posting videos and photos of the bear on social media. Local wildlife experts told The Guardian they had known about the animal since 2017, but after these social media posts made the rounds, the bear garnered its own small fan club in the resort town. Followers of the Bow Valley Network’s Facebook page ended up naming the all-white grizzly “Nakoda,” which means “friend” or “ally” in the native language of the Bearspaw, Chiniki, and Wesley tribes that are indigenous to the area.

A post shared by The Rimrock Resort Hotel (@rimrockresort)

Because of the rarity (and popularity) of this particular bear, officials with Parks Canada are doing everything they can to keep “Nakoda” from becoming roadkill. Two other grizzly bears—one of which was a sibling of the white bear—have been killed on the same stretch of highway within the last week, according to the local newspaper. Officials have already reduced the speed limit and implemented a no-stopping zone on that stretch of road, with Parks Canada and the Royal Canadian Mounted Police teaming up to patrol the high-traffic area.

There is a fence built along the road that’s meant to keep wildlife off the roadway, and Parks Canada staff members have used lights, noises, and other hazing tactics to try to encourage the bear to stay on the “right side” of the fence. But as they’ve witnessed repeatedly, the white grizzly is a skilled climber.

Read Next: Thirteen Yards in One Second: Why You Can Never Outrun a Charging Bear

Eastham says that the GPS collar lets them know when the bear is close to the highway and provides additional information about the bear’s location when it’s not visible from the road.

“The management goal is to encourage the animal to spend time in safer areas,” Eastham said.

However, as the white grizzly has shown them time and time again, persuading a wild bear to go where you want it to is much easier said than done.