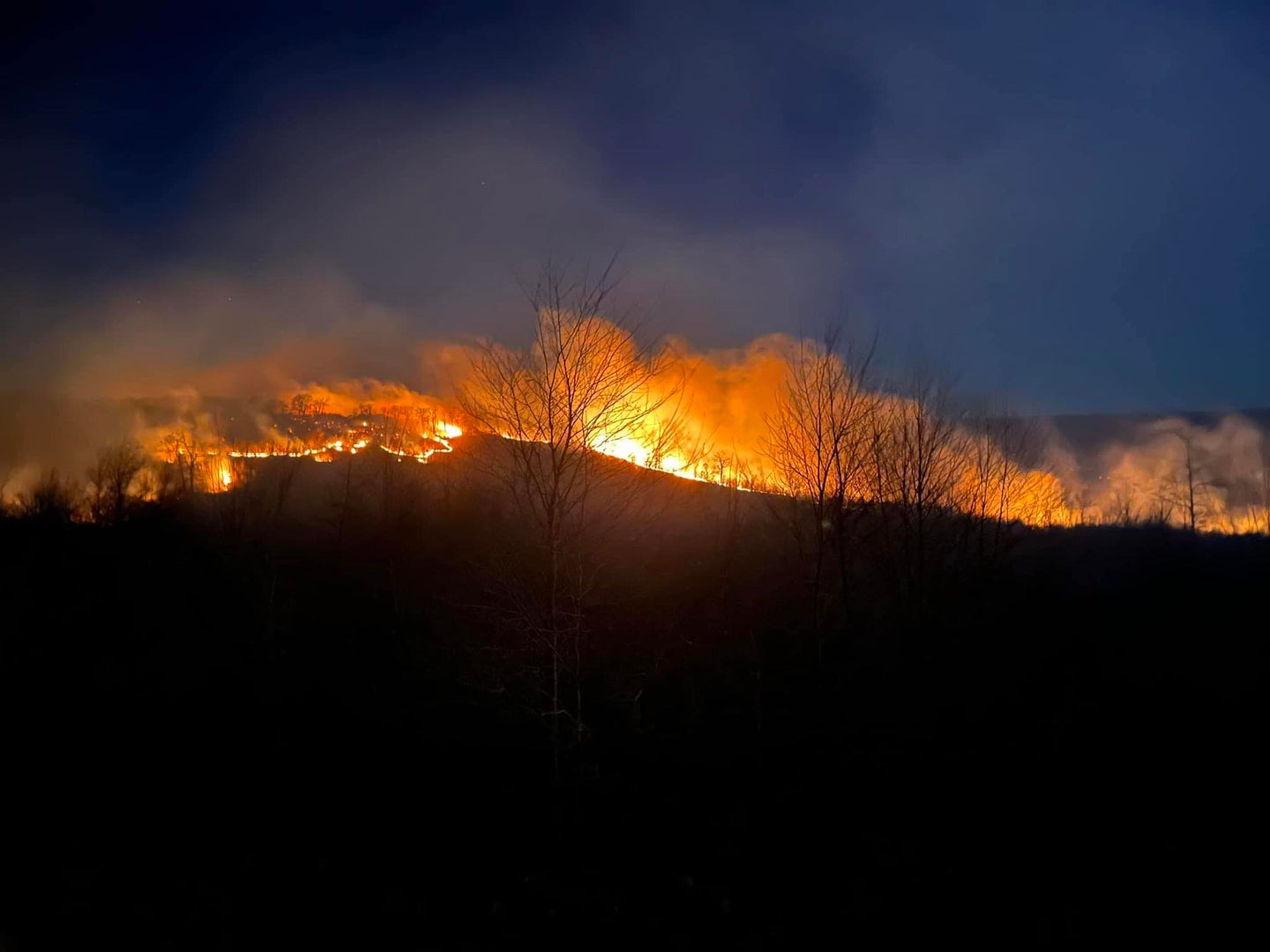 A view of the Sandy Ridge fire that burned in Centre Country. Mountain Top Fire Company / via Facebook
SHARE

Two late-season wildfires ripped through the heart of Pennsylvania’s elk range last week. One burned more than a hundred acres of forest in aptly named Elk County, while the fire in Centre County burned more than 800 acres. Both counties are in the central part of the state, which is home to an estimated 1,400 elk, leading to concerns about potential effects on the local herd. But wildlife managers say the fires could actually help improve elk habitat in the long run.

The Winslow Hill fire was first reported of Nov. 9, and it started somewhere along Route 555 a couple miles east of the Elk Country Visitor Center near Benezette. By 3:30 p.m., firefighters from 19 different companies and six counties had responded to the blaze. The fire was contained roughly nine hours later, and a spokesperson with the Pennsylvania Game Commission told reporters that the cause of the fire is still under investigation.

The Sandy Ridge fire, which also sparked on Nov. 9, was the result of a prescribed burn that got out of control. It was contained by 10 p.m. that evening, and crews with the Department of Conservation and Natural Resources put out the remaining hotspots the following day.

Because the fires burned through some of the state’s prime elk habitat, some hunters and conservationists were concerned about negative impacts to the herd and the overall health of the forest. But wildlife managers in the state indicate that the burn might be beneficial for the elk. This is because fires tend to open up the forest canopy, which allows more sunlight to penetrate and leads to new vegetation growth—particularly the saplings that deer and elk love to browse on. The charring of the forest floor can also add nutrients to the soil, which leads to even more growth.

“In general, elk are just going to avoid the fires,” PGC elk biologist Jeremy Banfield tells Outdoor Life. “And then all they’re going to do is provide additional habitat opportunities through rejuvenation. Barring anybody’s personal property being burned up, generally, [the wildfires] are a good thing for elk.”

To Banfield’s point, no structures burned in either fire, although one person in Elk County had to be rescued from his home and treated for minor smoke inhalation, according to the Courier Express. The timing could also have been much worse. The state’s general elk season took place the week before and ended on Nov. 5, so there were no elk hunters in the woods when the fires occurred.

Still, it’s rare to have wildfires this late in the year in Pennsylvania, with most burns taking place in the late spring and early summer. In 2021, for example, there were 1,371 fires reported throughout the state, with only seven incidents in October—and none of those burned more than five acres.

“Wildfires in Pennsylvania are rare,” says Banfield. “I mean, it’s possible, but the sources of ignition are not nearly as common.”

The smaller Winslow Hill Fire was big enough for local news outlets to label it a “major forest fire”, even though a 100-acre burn is minuscule compared to the ones seen in Western states, where wildfires typically burn tens (if not hundreds) of thousands of acres. As a result, wildlife managers there are always learning more about the interplay between elk herds and forest fires.

In the aftermath of Colorado’s Cameron Peak Fire—the largest wildfire in state history— researchers with Colorado Parks and Wildlife launched a migration study to figure out how collared elk reacted to the burn. Their data showed that many of the elk didn’t seem to be affected, with some remaining in their usual territories and continuing to send radio collar signals from within the fire boundary. In the months that followed the record-setting burn, researchers found that the elk population remained healthy and that their overall habitat had expanded.

“Now all of a sudden, that ground is getting nutrients that it didn’t have before,” senior CPW biologist Shannon Schaller told local news outlets in November 2020. “This should really be a benefit to wildlife habitat and expand what we would call their homes or their available habitat.”

Banfield and other wildlife managers in Pennsylvania are hoping for the same results in their own elk herd, which continues to expand every year, and especially over the last decade. In 2019, Pennsylvania hunters harvested a total of 129 elk, which was more than twice what they harvested in the 2010. The elk harvest already reached 90 so far this year, according to early reports by PGC, and there is still another hunting season that runs from December 31 to Jan. 7. After that, the state will conduct its annual winter count, which will give managers a better idea of how the herd is faring after the fires.