The 6 Best Do-it-Yourself Hunts in America

Elk, bears, turkeys, whitetails and more. Here are our top picks for DIY hunting adventures to plan for next season 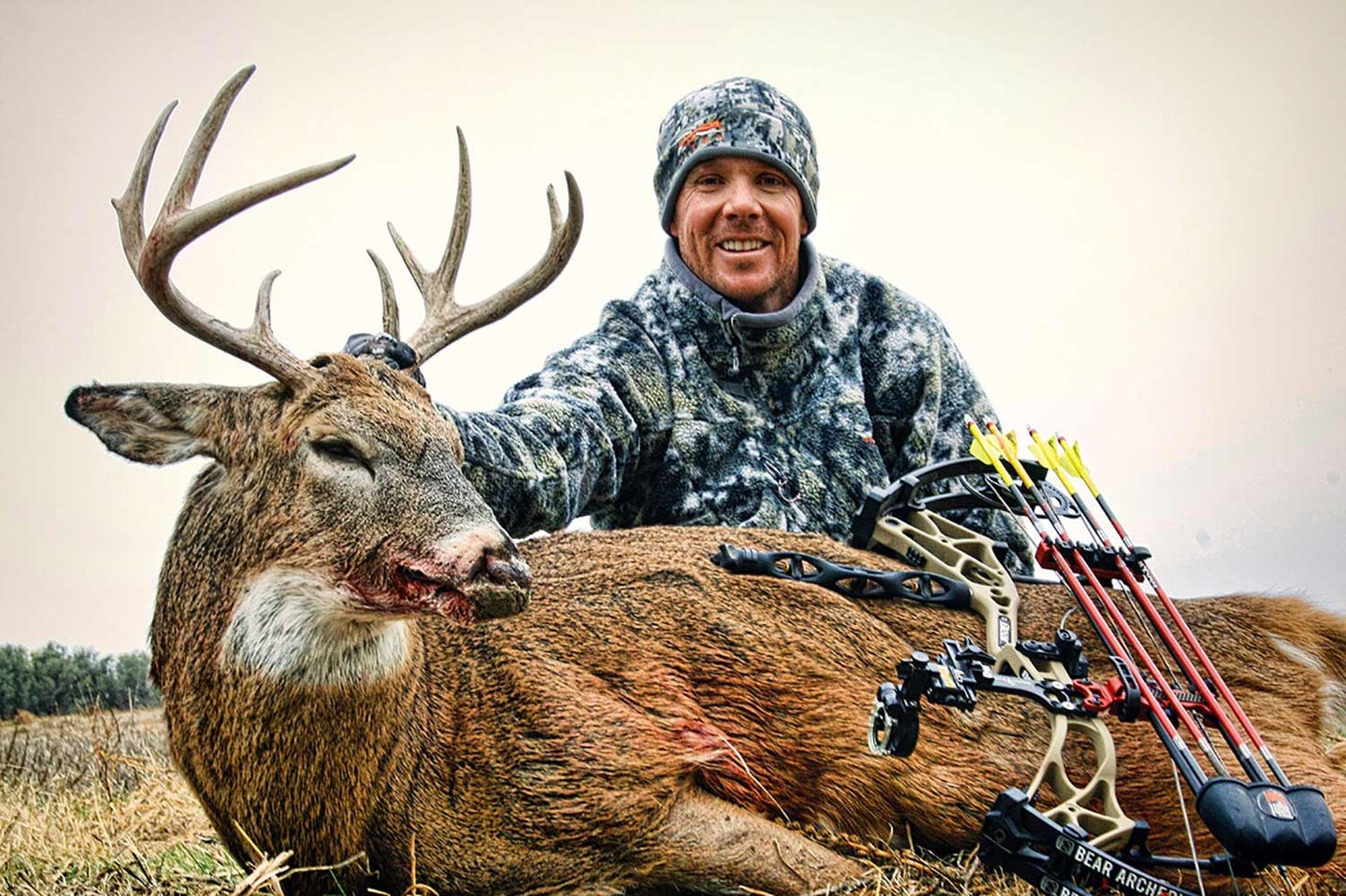 Although you will need to apply for a tag in April to hunt Kansas deer, your odds for drawing one are quite high. Jace Bauserman
SHARE

It’s never too early to begin planning for next season. If you’re looking for a do-it-yourself hunting opportunity in a place you’ve never been to before—or for a species you’ve never hunted before—we’ve come up with some prime DIY hunts to consider. Here are six of our top picks.

Everyone needs to hunt elk at least once in their life and there may not be a better place for your first do-it-yourself trip than Colorado. The Centennial State boasts the world’s largest elk herd and offers over-the-counter licenses for both archery and rifle hunters. Bowhunters can purchase either-sex tags for elk in 137 of Colorado’s 184 game management units. That number is similar for the rifle crowd during the state’s second and third rifle seasons, but those will be bull-only tags.

In addition to its over-the-counter tags, Colorado gives the willing-to-wander elk hunter plenty of room to roam. The state harbors 11 National Forests comprised of 13 million acres of public land. In addition, unlike some western states, you don’t need to hire a guide to access any of Colorado’s 41 Wilderness Areas. Wilderness access is a great way to escape the masses.

“Over-the-counter units in Colorado get a bad rap,” says elk hunting veteran J.C. Navarro. “We run into lots of people every year, but we consistently kill elk. This past season, we killed two bulls in less than 36 hours. Each was killed less than a mile from the truck, and we had hunters all around us. Our key is to study maps hard and hit a lot of hellish country that is close to trailheads and jeep roads. We look for access that requires an immediate steep ascent or descent. Lots of guys and gals walk by incredible elk country just because it’s close to a trailhead or access road. We highlight lots of these locations on our maps prior to our hunts.”

You don’t have to wait for fall for your next adventure. Nebraska boasts a robust population of turkeys and plenty of public land to chase them on. I use the state’s digital Public Access Atlas to diligently explore hunting areas, and it’s led me to innumerable turkey hot spots. The Atlas shows Wildlife Management Areas, National Forests and Grasslands, Open Field and Waters, and more in a state that boasts more than 500,000 acres of open-to-anyone dirt.

Also invaluable is the Cornhusker State’s Mobile Permit program. Spring hunters can fill up to three turkey tags, but you don’t need to buy them all at once. Last season, I tagged a bird on the first day, jumped on my smartphone, and purchased another $109-dollar, nonresident tag from the ground blind. Nebraska makes things easy and simple. Not to mention that if you’re looking to get a youth hunter involved in the springtime tradition, there is no better state. Youth tags, even for nonresident youth hunters, are a mere $8.

An archery-only season, which typically starts on March 25, gives bowhunters time to hit the woods before the shotguns come out. The state also has a youth shotgun season that typically opens around April 11.

“One key to killing Nebraska birds on public dirt is a willingness to do the work,” says Nebraska native Terron Bauer. “Lots of shotgun and archery hunters simply don’t want to work very hard to kill a turkey. Study your maps and find large areas that limit access. Walk-in locations are great because they prevent people from driving. There are lots of large walk-in areas around the state. If you’re willing to walk and go explore, you’ll find unpressured birds.”

Sure, Wyoming has more pronghorns than people, but its neighbor to the northeast has a great population as well. And when it comes to archery, most tags are available over the counter. Although present in most counties west of the Missouri River, the state’s largest population of speed goats is found in the far western rangelands along the Wyoming and Montana borders.

A quick visit to www.gfp.sd.gov provides access to the South Dakota Public Hunting Atlas. With over five million acres of public land in the form of BLM, National Forests and Grasslands, Game Production Areas, and Walk-In Areas, you’ll have no trouble finding a quality buck to go after.

In 2019, South Dakota required nonresident deer hunters to purchase a license by a specific date in order to hunt public lands. That was not the case with pronghorns, and at current status, the SDGFP doesn’t seem to be migrating in that direction. Bow season typically kicks off around the middle of August and runs through most of September. Rifle hunters will want to pay attention to online application dates, which typically start in mid-July.

South Dakota is one of my favorite pronghorn states. Typically, I run into lots of water. I mark water sources on my maps and set up a ground blind or two. Much of South Dakota’s western landscape is very broken, making spot-and-stalk missions very doable as well. Bring the best glass you can afford.

If you’re looking for a solid decoy hunt, schedule your trip for the third week in September. Bucks will be trying to gather harems, and those with harems are trying to keep them. Use your vehicle to cover country and get aggressive with the decoy. My favorite tactic is to let a dominate buck run off a challenger and then quickly position myself between him and his does.

Another spring hunt for your bucket list should be to hunt black bears in the Gem State. Over 70 percent of the state is public, and it’s permissible to set three different bait sites. While some tags are offered on a limited basis, most, for both archery and rifle, are available over-the-counter. In many units, hunters can purchase a reduced rate, second bear tag for $41.75.

Note that each bait site must be fitted with a baiting permit, which is available at IDFG offices around the state. Be sure and scroll through the rules and regulations posted at www.idfg.idaho.gov to ensure your bait containers and sites meet state regulations.

Idaho provides sportsmen with a helpful Hunt Planner tab on their website as well as an Access and Maps tab. While bear numbers, according to IDFG officials are solid throughout the state, public areas in Clearwater, Nez Perce, and Idaho counties are topnotch locations to find good a bruin.

“Idaho is a solid location to pull off a DIY black bear hunt,” says veteran outfitter Jim Brennan. “The biggest thing that hinders traveling bear hunters is time. Most don’t allow themselves enough of it, and they don’t spend the offseason gathering bait. You will need a lot of bait. Trying to buy bait upon your arrival is super expensive, and you will struggle to find enough of it.

“There will be those rare instances when a bear finds a bait in less than 24 hours, but I recommend slating three full days to set bait sites and get them up and running, and then reserve a full week for hunting.”

The dream of hunting Kansas whitetails can indeed become a reality. While the highest whitetail densities in Kansas are found in the eastern third of the state, numbers have skyrocketed statewide and can be found in virtually every nook and cranny of the state’s 19 Management Units. You will need to apply for the draw that happens toward the end of each April, but it’s well worth it. Not only are draw odds high across the state, but when you’re hunting Kansas, your chances of an encounter with a deer-of-a-lifetime increase. A quick glance at the Kansas Top 20 Deer Records provides a list of gaggers and the county in which they were harvested.

The Kansas Department of Wildlife, Parks and Tourism website has multiple public access maps available, including a complete online map of all Walk-In Hunting Areas. These locations are private-land tracts leased by the Wildlife Department. The walk-in only access allows hunters to escape the crowds and push deep into larger tracts. However, don’t overlook smaller tracts. Many hunters ignore sub-40-acre parcels. That’s a mistake. The website also has a free ArcGIS Explorer App that will bring the WIHA tracts to your mobile device for better in-the-field access.

“There’s no place like Kansas for big deer,” says Danny Farris. Farris has hunted the Sunflower State for years and has killed multiple monsters, including a 171-inch giant to his credit. “I avoid the crowds by hunting ground that most deer hunters overlook. Everybody wants to be in a tree, but that’s where all the people are. I hunt the ground pheasant hunters access. I look for massive CRP fields with only a few cedars and some deep valley cuts. I get on the ground and get after these big whitetails. Whitetails love this type of country, but almost nobody goes in after them.

“My favorite tactic during bow season is to use a bow-mounted doe decoy in combination with a 3-D buck decoy. I place the buck decoy where cruising deer can see it. Then, I tuck into some brush 10 or 15 yards away from the buck. To a rutting buck, this setup looks like a buck is tending a doe. It’s pure poison, and I’ve shot multiple bucks on public ground in Kansas using this technique. When you’re the decoy, it makes for an unbelievably exciting hunt.”

Successful Coues deer hunting requires a special mindset and the willingness to wander. Rifle and bowhunters can expect to burn plenty of boot leather and will want to tote quality glass. In the Coues game, those with the best glass set themselves apart from others by uncovering deer most miss.

Coues deer are most common in the southeastern mountains but extend to the Mogollon Rim and into the White Mountains.

While archery tags, even during the December rut, are available over the counter, rifle tags are distributed on a draw basis. Permits in remote areas during the October season typically offer a 100 percent success rate, while December rifle tags are a tad harder to come by. A new web-based mapping tool offered by the Arizona Game & Fish Department makes finding public Coues ground all the easier.

“Use great glass,” says outdoor writer Aram von Benedikt. “Coues deer are best found by searching vast, rugged country one small piece at a time through high magnification tripod-mounted binoculars. A good scope with a dial-up turret will round out your package.

“You will also want to hunt remote, hard-to-access country. Coues deer don’t like pressure, so look for them in rugged canyons, beneath mountain-top cliffs, and other places that are hard to get to. Also,don’t be afraid to bivy out. The best Coues deer territory is tough to get to. Save yourself a ton of effort and avoid disturbing the area by spiking out with a backpack camp for several days on a good vantage point. When you spot a good buck, make your move.”

“When it comes to shooting, aim small,” von Benedikt adds. “Carry a lightweight, accurate rifle in a caliber tailored for distance. Most shots will be long — 300-plus yards is common. Lastly, focus on being clandestine. Coues deer are the wiliest critters I’ve ever hunted. Stay off the skyline, try to always keep under cover when you move, and set up to glass where you’re not easily spotted.