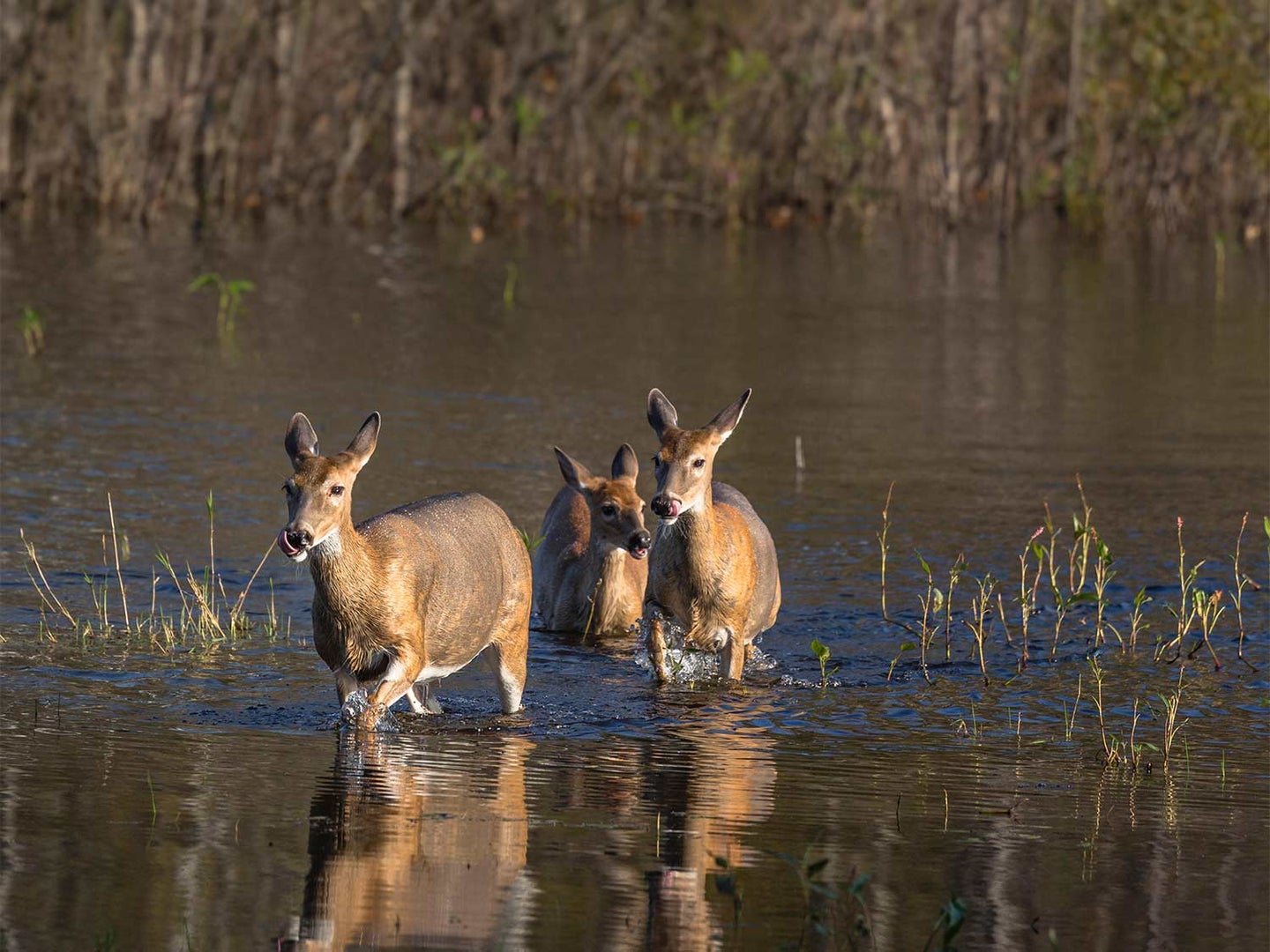 Increased rainfall and flooding are contributing to changes in both habitat and food sources for whitetail deer. Linda Freshwaters Arndt / Alamy
SHARE

With only weeks remaining before season openers, many are wondering how to deal with a sodden, unfamiliar landscape. Heavy snowmelts followed by seemingly incessant rain left much of the United States wet or underwater during spring and summer of 2019. The Midwest was hit hardest—primarily along the Missouri River, and to a lesser extent, Mississippi River—and farmers took it on the chin.

With fewer acres of soybeans and corn, many hunters are finding it harder to rely on classic early- and late-season agricultural food sources. In fact, heavy precipitation in some regions may even be affecting hunter access. The bottom line? Major swings in regional weather patterns in the past few years are changing the landscape and forcing deer hunters to adapt.

Deer managers in America’s heartland are discussing the challenges facing farmers and deer hunters, and for better or worse, increasing precipitation is having an impact across the U.S. We asked some experts to weigh in from around the country on some of the ways that weather is changing deer hunting, habitat, and food sources.

“With all the rain, we had considerable flooding in Missouri this year,” says Jason Isabelle, Cervid Program Supervisor with the Missouri Department of Conservation. “Therefore, there will likely be considerably fewer crop fields that get planted this year. Depending on where you hunt, your favorite soybean field that draws in deer during the early part of deer season may not have been planted. The same goes for any warm-season food plots that hunters may have planted in a low area. In addition to early-season hunting, this could also affect late-season hunting, when many hunters key in on crop fields.”

Luke Meduna, A Wildlife Biologist with the Nebraska Game and Parks Commission, painted a similar picture.

“There will definitely be impacts from the flooding and spring weather that we’ve had,” he says “There are many areas that continue to deal with excess water and will do so into the foreseeable future. Hopefully, those areas will see some reprieve by this fall. Additionally, wet weather has given farmers difficulties in getting into the fields as well as delayed crop emergence. Surprisingly, Nebraska has fared quite well in this regard compared to many of the other Midwestern states, but we’re still behind.”

Levi Jaster, Big-Game Program Coordinator for the Kansas Department of Wildlife, Parks and Tourism, says wet conditions might have further-reaching consequences in his state.

“The rains hit Kansas farmers fairly hard this year, and many crops were or are being planted late, if they are planted at all,” he says. “Most of our public lands are associated with a large lake or reservoir, and flooding on many of them will prevent the planting of ag fields (and) food plots. Some areas with extensive flooding may see very little food production if they remain flooded more than a few days. And some areas may see abundant amounts of food, but it may not be foods traditionally considered by many hunters.” 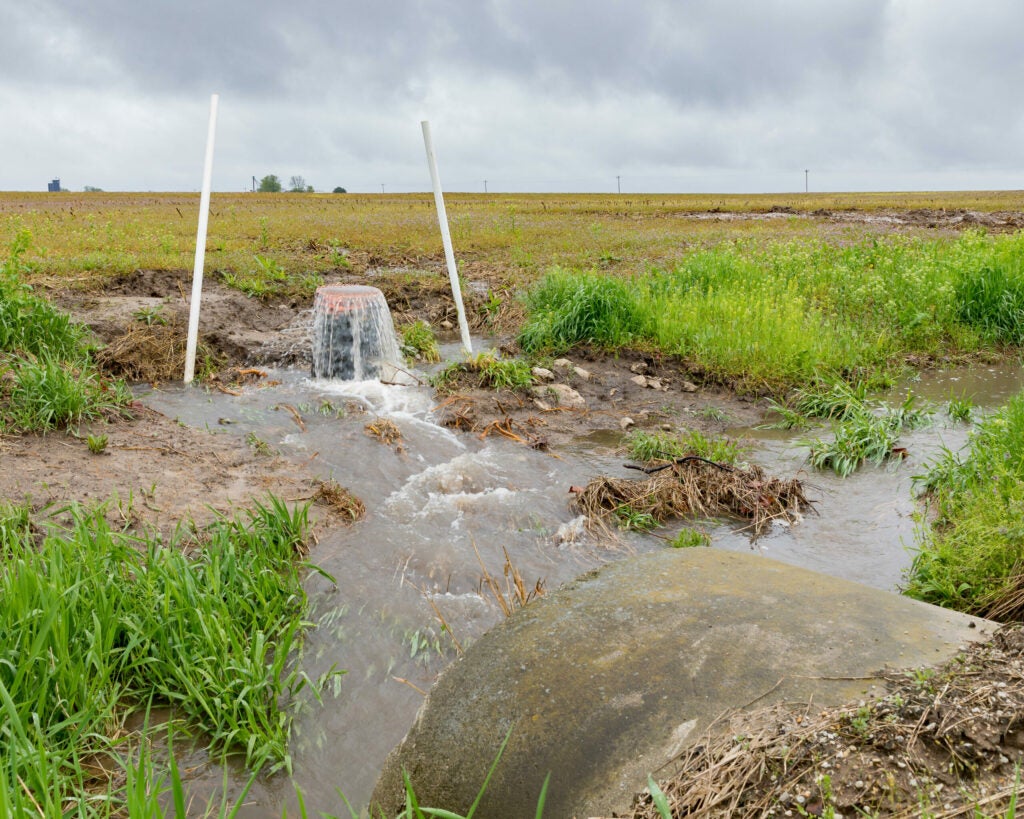 Heavy rains in the Midwest have caused flooding and delayed the planting of corn and soybeans.

Jaster also feels that many of Kansas’ public lands may have a significant proportion of their deer habitat underwater at the start of the 2019 season. “In many areas, cover, in general, may be much thicker than most years, so even seeing deer could be tougher,” he says.

Johnathan Bordelon, deer program manager for the Louisiana Department of Wildlife and Fisheries, says a prolonged Mississippi River flood that began in late 2018 would hinder hunters in his state as well.

“While much of our state is not directly impacted, some of the most productive deer areas of Louisiana have been inundated. Displaced deer will be congregated on refuge habitat outside of the floodwaters,” he says. This can lead to higher deer densities on available lands, along with increased predation, disease and parasite transmission, and increased competition for remaining food resources. As a result, Bordelon anticipates lower recruitment in 2019 along with a below-average deer condition for parts of Louisiana.

The situation isn’t as dire in parts of the Upper Midwest, but hunters will still face curveballs.

“Across the state, the planting of corn has been greatly delayed due to high rainfall,” says Ashley Autenrieth, Deer Program Biologist with the Michigan DNR. “Those that have been able to plant their crop will likely harvest it later this year due to the delay in planting. When corn is still standing in many areas, that makes for difficult hunting conditions, since deer will often take refuge in the tall corn stalks.”

An Increase in Natural Food Sources and Mosquitoes

Kevin Wallenfang, Big-Game Ecologist with the Wisconsin Department of Natural Resources, says spring was wet but not wetter than the previous three or four years. Grain crops were behind because of wet fields and cold soil temperatures, and many hayfields were uncut because frequent rains didn’t allow enough consecutive drying days.

“At this point, we would say that hunters can expect a normal fall when it comes to food sources in the north and perhaps some crops remaining in the fields longer than normal throughout the farmlands,” he says. “The biggest hindrance of early-season hunting might be the mosquitoes.”

Situations in the East varied. Bret Wallingford, Deer and Elk Section Supervisor with the Pennsylvania Game Commission, says his state experienced the wettest spring on record. Meanwhile, Matt Knox, Deer Project Coordinator with the Virginia Department of Game and Inland Fisheries, says rainfall there was average to slightly higher than average.

Populations Increase as the Desert Blooms

Conversely, abundant precipitation might have boosted hunting prospects in the parts of the Southwest. Dustin Darveau, Terrestrial Wildlife Specialist with the Arizona Game and Fish Department, says his state is in a severe drought, but above-average precipitation in 2018 should help many deer populations increase. Orrin Duvuvuei, Deer Biologist with the New Mexico Department of Game and Fish, agreed.

“Populations in portions of southern New Mexico are down slightly compared to historic levels because of long-term drought conditions,” he says. “However, the recent increased moisture has helped these populations start to rebound.”

Deer biologists and hunters in areas most affected by flooding agree that hunters must switch gears if they hope to continue to be successful. Here are some strategies that they are using to help adapt to the change in weather and deer habitat.

Luke Meduna says that simply burning boot leather and staying observant can solve many problems caused by flooding. “Scouting is always the most important part of deer hunting, and the importance will be magnified tremendously this year. It’s likely that the deer you’re hunting have had to make changes. Don’t wait until opening day to figure those changes out.”

“This won’t be a year you can rest on your laurels, thinking that your old reliable tree stand will produce as always,” says Levi Jaster. “If you hunt anywhere with flooding, get out early (after it’s safe), and start scouting. Things might be very different, and you’ll have more time to change your plans or tactics. If you hunt near the upper end of a large reservoir, you may need to find a new area, because it still may be flooded this fall.”

Jaster also feels that water isn’t necessarily the barrier we sometimes think it is. In some places, if it’s safe to do so, hunters willing to utilize boats may be able to find dry areas that are holding deer and hard to access otherwise. Hunters can also use the flooding to their advantage, as new pinch points and refuge areas come about due to the floodwaters.

“Take an inventory of the food sources that are not available, and adapt as necessary,” he says. “If your favorite soybean field didn’t get planted, or if the flooding resulted in your warm-season food plot failing (or if you weren’t able to get it planted), plant a cool-season plot before the archery season starts.”

There is usually still plenty of time to get a cool-season plot planted during late summer or early fall that will attract deer as the early hunting season arrives.

“The food plots will be the biggest challenge,” he says. “I planned to plant corn but had to switch to beans late. Now we haven’t had rain since I planted beans. I will end up replanting everything to turnips and winter wheat in two weeks. That will only give me late-season food, not bow season food. Iowa doesn’t allow feeding during the season, so none of my bow stands will have food.”

Rather than rely on early season food plots to draw deer, Mattly suggests adapting your strategy to re-hang some bow stands by funnels and large row-crop fields.

Mick Bowman, of Garnett, Kansas, says the crazy spring might actually create some positives in his area.

“Me personally, I won’t change a thing,” he says. “We have had a great crop of (fawns) this year, and the crops did get put a little late, but that could help the early-season hunter to can get some bachelor bucks patterned.” He feels that when rainy weather forces a late planting, beans will stay green a lot longer, therefore, late-season may provide better chances than before.

Key In on Natural Food Sources

Avid deer hunter Pat Strawser, of Millersburg, Pennsylvania, says abundant spring and summer rainfall creates a buffet of natural deer food in his area, so he plans to shift his focus early in the season.

He feels that deer may not get to the plots until later than normal—if at all—because of the acorns. Instead, he suggests shifting focus to areas with more acorns to avoid wearing out food plots until later in the season—when the food supply is a little less competitive. “Any time you Mother Nature gives you such drastic changes in water tables, food sources, and cover, I think it would be foolish not to change your hunting style,” he says.

Ultimately, the obstacles created in many areas by 2019’s wet start might be temporary speed bumps. In 2011, heavy spring rains delayed corn planting in the southern part of the Corn Belt, according to an April 21, 2011, farmprogress.com article. Meanwhile, Iowa’s 2011-’12 whitetail harvest decreased just 4.5 percent, according to Trends in Iowa Wildlife Populations and Harvest 2011. According to 2011-2017 Deer Seasons by the Numbers by Indiana Whitetail Deer Herd Management, Indiana hunters took about 129,018 deer in 2011, a total in line with the three-year harvest average of about 130,333 deer from 2011 through 2013. And, as deer managers often point out, harvests frequently fluctuate because of weather conditions during deer seasons.

“This is obviously not a normal year, but it’s not a panic-button situation, either,” he says. “It’s a year that will challenge the talents of hunters whose areas have been significantly impacted by the weather events. Good hunters will adapt and likely continue in their success. ‘Lucky’ hunters that go out and expect the same thing as last year will have some trouble.”

And Jaster emphasized that hunters must simply roll with Mother Nature’s ups and downs.

“Controlling the weather is something that’s out of our purview,” he says. “The deer adapt. Will deer hunters?”