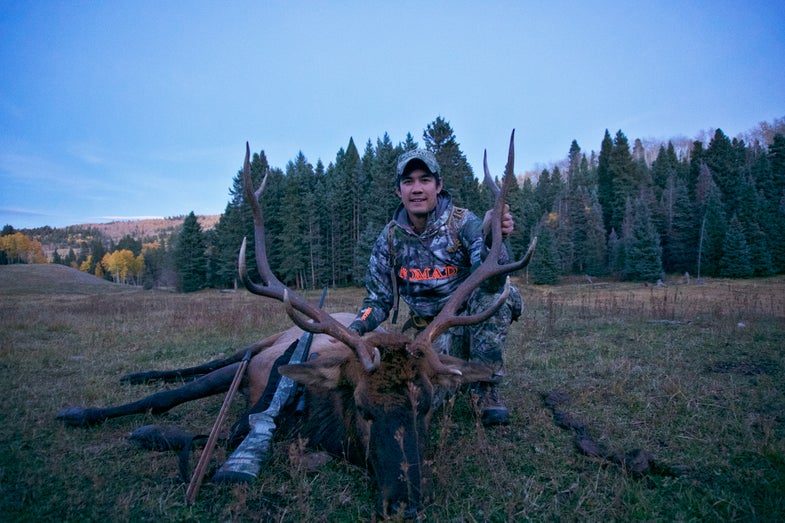 That afternoon we decide to set up in the same meadow where Howard killed his bull. We tuck into the aspen grove and wait for long shadows to work across the valley. With an hour of light left, two cows show up on the left edge of the meadow. They take a look around and then bury their heads in the grass. About 20 minutes later another cow comes trotting out of the timber, only 80 yards to our right. I hear branches snapping behind her and then see a brown body moving through the aspens. “It’s a bull,” Kathy whispers. A nice 5x5 bull steps into the meadow without ever looking our direction. He sees the cows on the other side, gives one faint bugle, and heads their direction. At 80 yards he stops broadside and two quick shots drop him not 20 yards from where Howard’s bull fell. I’ve hunted hard for four days and am happy with the bull. But it’s even more than those four days. I’ve hunted elk for at least one full week each season, for the last five seasons, without ever killing one. Most of those trips were physically demanding hunts on public land, where any day we saw elk was a good day. So as I wrap my hands around the bull’s ivory-tipped rack, I’m trying to soak in every second, knowing I’ll need to recall this moment on some elk hunt in the future when the bulls are high above the timberline on a distant ridge. Andrew Howard
SHARE

Eastern Colorado goes on forever. Somewhere up ahead are bugling bulls and golden aspens—the promised land. Back behind you, your normal life is still pulling at you: work emails, status updates, deadlines. But none of that really matters now.

Just tick off another mile and another minute until you make it to camp. Or so it felt as my buddy Andrew Howard and I trekked from St. Louis, Missouri, toward Taos, New Mexico, last October for our elk hunt.