The Most Efficient Way to Pack Out a Bull Moose

If you can get a bull moose back to the truck in Alaska, you’re capable of hauling any kind of wild game out of the woods 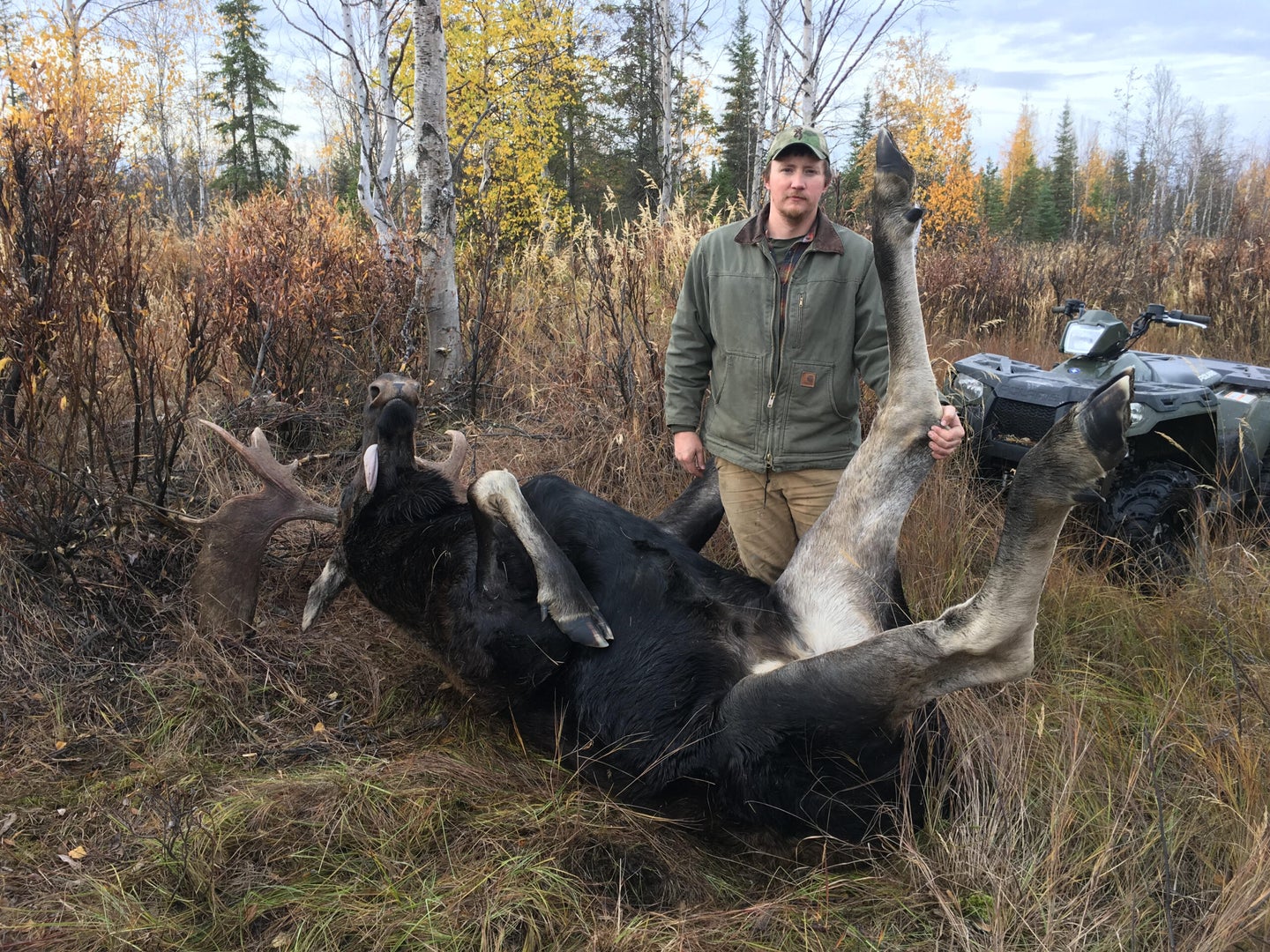 The author getting ready to pack out a moose in Alaska. Tyler Freel
SHARE

As a long-time hunter in Alaska, I’ve killed a variety of big game, including sheep, caribou, bears, and moose. Which means I have also had to field dress and pack out all those animals. I know exactly how many backpack loads it takes to get each one off the mountain or out of the backcountry and back to my home near Fairbanks. Moose are by far the most tedious to pack out because of their sheer size. A big bull can weigh in excess of 1,000 pounds. This takes around seven to nine backpack loads if I have to walk the meat out, which is a tremendous amount of hard work.

For someone who hasn’t dealt with one on the ground, moose are unfathomably big. Moose are difficult, sometimes impossible, to move on your own. It can be hard just to position them properly for optimal field dressing. But I have learned if you can efficiently pack out a bull in Alaska, you are capable of hauling just about anything out of the woods. So, here is how I transport moose from the field to the truck in as few steps as possible.

Before I get into the specifics of dressing, quartering, and packing out a moose, here are some the essentials you should bring to make the job much easier.

Supposedly, my grandpa never shot a moose he couldn’t back his truck up to. After shooting my first moose in a hip-deep swamp and packing hundreds of pounds of meat through a half-mile of muck and alders, I quickly understood why. Images and footage from social media and outdoor television show hunters hauling all their meat out on foot, but if you can get to your kill with a vehicle, boat, or even a bush plane, I recommend it. It’s much easier to transport the meat that way.

The location, style, and timing of your hunt will vary, and the equipment you have at your disposal will also vary. Canoes, jet boats, four-wheelers, Argos, side-by-sides, your truck, or a plane (if you have access to one) are all ideal for meat transport. In some cases, you will use multiple modes of transportation to get your kill home. (Just be aware some states require you to bring the moose out whole, so plan for that.)

I typically use a four-wheeler to help with field-dressing and transporting the animal. An ATV or UTV is nice to have when you need to move a moose to field dress it, because you’re probably not going to be able to muscle it into position by hand. Sometimes bulls die right in a depression or nasty swamp hole. Tools like pulleys, extra rope, and a chainsaw can be worth their weight in gold on a tough extraction. Having a chainsaw can help you cut brush or a trail to where the moose is if necessary, and sometimes you might have to construct a tripod or a lifting lever to use in conjunction with your winch, rope, and other extraction equipment.

When I can get my four-wheeler to the moose, I’ll first hook the winch up to one of the front legs and pull the bull over onto his back. Like any other animal, I’ll make my opening cuts to remove the guts, but then I use a Sawzall to cut through the sternum and bottom of the pelvis. Because they’re so big, and the guts are so heavy, it helps to open the flank on one side behind the ribs to pull the entrails out rather than try to lift them over the pelvis. Once removed, I’ll use the 4×4 to pull the bull a few feet away from the gut pile, if possible.

Skinning and Transporting the Moose from Field to Home

I start by skinning back one side of the moose, removing the front and rear quarters with a knife, then sawing off the ribcage just below the backstrap. I find it handy to set the meat out on a clean tarp and then bag it all at once. I’ll then pull the hide out on the ground, roll the bull to the other side (at this point, the bull is light enough to flip over) and repeat the process until only the neck and spine remain. I leave the backstraps and tenderloins on the spine and saw off the neck with the meat attached.

All I leave behind are the hide and guts. Depending on the spot, my hunting partner and I will use either a meat wagon or canoe, pulled behind the wheeler with a stout piece of rope, to get the moose back to camp. From there, it’ll go onto the boat and then home to hang. After all the meat is home, we must boat back to get the wheeler. Although I prefer to use the gutless method of field-dressing some animals, I’ve found it to be easier and cleaner to gut a moose first, then start skinning and cutting.

If I have motorized transportation, I will leave all the meat on the bone. I think it stays cleaner, hangs better, and certainly is quicker to process at home using my grandpa’s old Butcher Boy band saw. The majority of folks here in Alaska process their moose in a similar manner, but most remove the backstraps, tenderloins, neck, and occasionally the rib meat from the bone.

The Hard Way: Walking Out Your Meat

Sometimes you have to transport a moose without any form of motorized assistance. I try not to do that, but plenty of people do it every year. It’s not that different in method, just a ton more work, especially if your moose happens to die in a tough spot or you wound it and it dies miles from camp.

One thing you should always have in your pack, whether you have access to a motorized vehicle or not, is some rope. And if you have the space in your pack, bringing a rope-along or a pulley is even better, particularly if you don’t have a 4×4 to move the bull. A single pulley tied off to a tree or other anchor point can help you reposition a big animal. I’ve seen a rope-along used to pull a bull moose out of a river and onto a gravel bar. Just having rope to tie off the leg of a moose to a tree to keep him in position for field dressing is beneficial. If you can’t keep the bull on its back, or it’s stuck in an awkward position, you’ll just have to start skinning and removing meat until it’s light enough to move.

Read Next: 10 of the Top Moose Cartridges and Bullets

Think Before You Shoot

If you’re going to be packing an entire moose out on your back, you need to think long and hard before you pull the trigger. It’s common for moose hunters to pass up shots because getting the meat out before it spoils and keeping it clean is extremely difficult in the wrong circumstances, like in warm weather. At the very least, you can expect up to nine heavy, awkward backpack loads. Even a single hind quarter will often weight more than 100 pounds, and the terrain you will be carrying it through isn’t exactly easy walking.

You’ll want a solid pack frame. The standard for moose meat packing is the Barney’s Freighter frame from Frontier Gear of Alaska. Most people will be averaging less than one mile-per-hour while loaded heavy, so plan accordingly. You’ll also need to keep drinking plenty of water and devouring calorie-dense snacks. The process can take multiple days sometimes, and that’s fine if you’ve handled the meat well and the weather is cool. If it’s warm weather, or you doubt your capability, it’s best to wait for a better shot opportunity.

At times, you’re just going to have to do what’s necessary to hike a bull moose out of the field. That can be a lot of hard work, which you need to prepare yourself for. Go in with the mindset that you’re going to have to walk the animal out in several trips, because you never know what location a shot will present itself. As with any project, having the right tools will save you time and sweat. So, before you go, make sure you have done the necessary planning to haul a moose out in any scenario.