Although he would've been happy filling his tag with a 330-class bull, bowhunter Chad Mendes arrowed a giant nontypical elk on the San Carlos Reservation 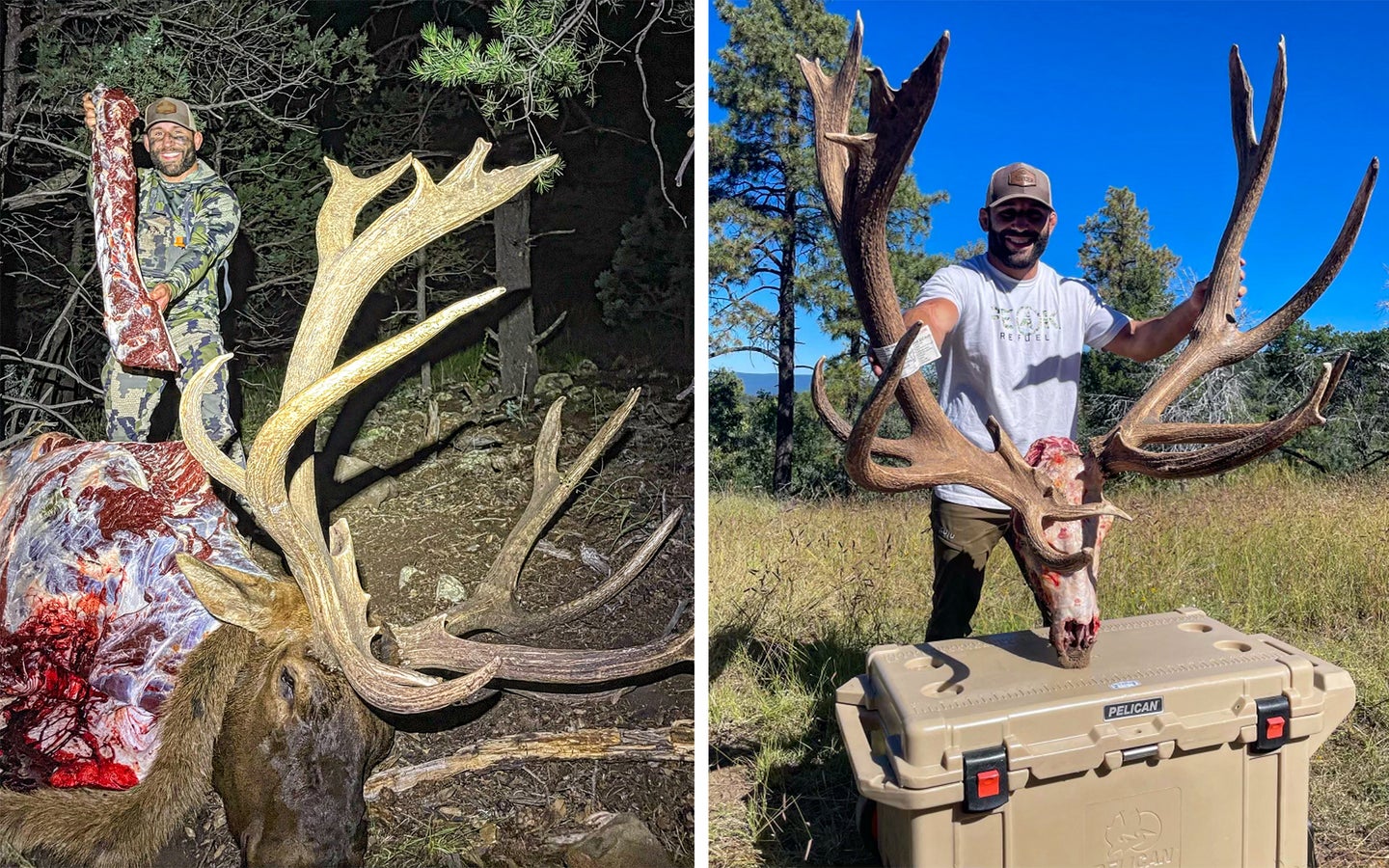 Filleting out the backstraps; Mendes with the skull of his San Carlos bull. Courtesy of Chad Mendes
SHARE

Chad Mendes had mixed up the dates of his elk season. The 37-year-old was hunting in Oregon last month when he realized the Arizona elk hunt that would be the highlight of his fall opened not on Sept. 25 like he thought, but on Sept. 19.

“I mentioned it to my wife, and she was like, ‘What are you saying?’ And I’m like, ‘Nothing,’” says Mendes with a good-natured laugh.

Mendes, a bareknuckle boxer and former MMA fighter, lives in northern California, where he runs Finz and Featherz Guide Service and does full-time marketing on Instagram. That leaves him plenty of flexibility for elk season, but it also puts a squeeze on his family time. His wife, who Mendes describes as a “supermom,” was home with their 3-year-old and 10-month-old daughters. With hunts lined up before and after his Arizona trip, Mendes decided to sacrifice the first five days of his season.

Finally, he made the long drive south to the San Carlos Apache Reservation in southeast Arizona. The San Carlos spans some 1.8 million acres of scrubby desert and alpine meadows, and is known for producing trophy-quality elk that attract hunters like Cam Hanes. To prepare for his San Carlos hunt, Mendes woke up at 5:30 a.m. almost every day in 2022 to shoot his bow for an hour. He would mix up the distances occasionally, but most often he would shoot at 60 yards, sending arrow after arrow downrange.

On the evening of Sept. 23, Mendes and two buddies set up camp on the unit, where they met their tribal guide, Dustin Boni. San Carlos regulations don’t require hunters to hire a Native outfitter, but Mendes knew Boni’s reputation as an excellent elk guide and enlisted his help.

That summer, Boni had spotted—just once—an incredible bull on the reservation. Boni recorded a video of the elk with the extra mainbeam and heavy gnarled, tines, but didn’t show it to Mendes. Instead, he just sent him a text. There’s an absolute giant on the unit right now, he wrote, but he’s on the border. Not sure he’s going to stick around.

While it was cool to know there was an elk like that in the area, Mendes says he wasn’t planning to target the bull.

“I’ve never killed anything like that, of that caliber. So there was never anything in my brain that was going ‘I only want to go after that bull.’ I’m the type of guy who is happy with ‘decent’ and ‘success.’ I like elk meat and a freezer full of elk meat. I’m not trying to kill a spike, but if it’s a decent bull, I’m not passing it … I know this [place] is typically known for giant bulls, but I would be completely happy with a 330 bull and to get home for my wife’s birthday and see my girls.”

That’s why Mendes was happy to call an audible on the first morning of his hunt. He, Boni, and his buddies were driving to the area where Boni thought the bull might be rutting when they bumped into a herd along the way.

“We rolled the windows down and they’re bugling all around us,” says Mendes, who grabbed his bow. Everyone else scrambled for their packs and set off into the scrub to chase bugles all morning. They nearly closed the distance on a nice 340-class bull that, in turn, kept trying to get downwind of their calls. Finally, the bull busted the hunters and put an end to their morning hunt.

The men trailed the herd, which held seven or eight bulls, through the cedars until the bugles tapered and the elk bedded in a ravine. Mendes and his buddies backed out with plans to return that evening.

When they did, plenty of bulls were on their feet and bugling in the cedars. One bugle over the hill sounded closest, though not particularly large—“five or six other bulls around us sounded way bigger”—so Mendes decided to work him. His buddy, Nate Butcher, dropped back about 50 yards and began with some light cow-calling. The bull would answer cautiously, working slowly toward them.

“He was taking forever,” says Mendes. “He’d take a couple steps, let out a bugle, look around.”

Butcher mixed in some bugles and began to cut off the bull’s own bugles. That seemed to fire up the bull, who started bugling more frequently. He was starting to sound a little closer with each call. After nearly half an hour, the bull’s legs finally appeared through the cedars.

There was a paper-plate sized opening in the brush 20 yards ahead of Mendes. Beyond that, a clearing. Mendes ranged the farthest tree in the clearing to 60 yards, and set his pin to 60. Finally, the bull’s nose poked out of the brush.

“He’s broadside to me, but all I can see is his nose and the tips of his fronts. I could tell the fronts looked good. I’m like, it’s probably at least a 330 bull, so if he steps out, I’m going to send it. I’m kneeling there and it felt like an hour. It was probably just five minutes, but I can just see his nose and my heart is racing out of my chest. I’m trying to tell myself to calm down,” Mendes says. “He’s just looking around. The wind keeps touching the back of my neck, then it hits me in the forehead and then the back of my neck. And I’m like, he’s not going to sit here much longer.”

The bull didn’t. It let out a deafening bugle and pushed forward.

“As soon as I saw that first step, I quit looking upstairs and just focused on that paper-plate sized hole.”

Once most of its torso had appeared in the opening, Mendes drew his Hoy Ventum Pro. The bull heard Mendes moving in the brush and stopped—his vitals perfectly positioned in the shooting lane.

“I settled my pin and released, and just watched the lighted nock make a perfect heart shot behind the shoulder,” says Mendes. The bull crashed away into the brush.

“None of us had any idea what the bull this was,” says Mendes, who had felt great about his shot.

The four men talked excitedly together for half an hour before picking up the trail. The arrow was lying in the dirt 10 yards past the hit site. After creeping along the trail, Mendes spotted the bull’s back about 25 yards away—but couldn’t see its head. Unsure if the bull was bedded, he slipped another arrow into it. The bull, which was lying 80 yards from the hit sight, didn’t move.

“I come around the back side of him and finally got a view of that rack, and all of us just freaked out,” says Mendes. Boni recognized the elk immediately.

The bull, which had rutted hard and broken off dozens of inches of antler, was clearly the same one he’d spotted that summer. Its antlers ultimately measured about 370 inches and would have scored well above 400 if you added back the missing tines. The original rack, which included two big, palmated kickers that flared off the mainbeams, had earned the bull the nickname “Ric Flair,” after the legendary WWE wrestler.

“We were all beyond ourselves,” says Mendes. “It was just so cool to have my buddies there to be a part of the whole thing, and me being okay shooting a 330 bull and then it ends up being the biggest bull on the unit was a big surprise for sure. That’s a hunt I will never, ever forget.”