Anglers can earn $33 per fish for catching brown trout 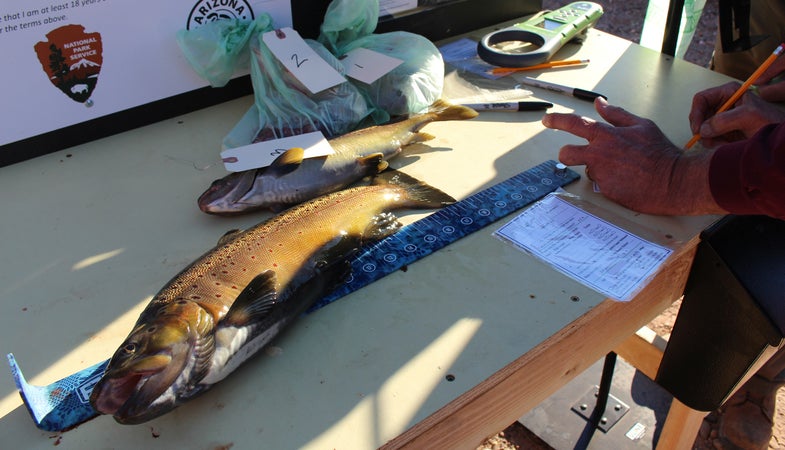 Anglers can make $33 per brown trout on the Colorado River in Arizona. National Park Service
SHARE

It’s not every day that anglers are paid to catch brown trout, but that’s what’s happening now in Arizona on the Colorado River between Glen Canyon Dam and the Paria River. The bounty program is called the “Brown Trout Bonanza” and runs Apr. 1-May 2. The Purpose of the “Bonanza” is to encourage anglers (via cash rewards) to reduce brown trout numbers in this portion of the Colorado River. This is necessary to protect native fish species from brown trout predation. Browns are notorious and ravenous finfish predators that target native river species.

The bounty program is called an “incentivized harvest,” and was chosen as the favored option by public review to reduce brown trout. It was selected over other options such as mechanical removal of browns or disrupting their spawning.

Anglers can register their fish by turning in brown trout heads and entrails in bags provided at the Lees Ferry boat ramp. They also need to fill out a data card for each catch. Only brown trout from the specific area count.

“Bounty” anglers must have a valid Arizona fishing license, and only artificial lures with barbless hooks are allowed. The Brown Trout Bonanza is sponsored by the Glen Canyon National Recreation Area and the Glen Canyon Conservancy. This year’s Bonanza is an expansion of the program started in November 2020, when $25 bounties were offered for brown trout.