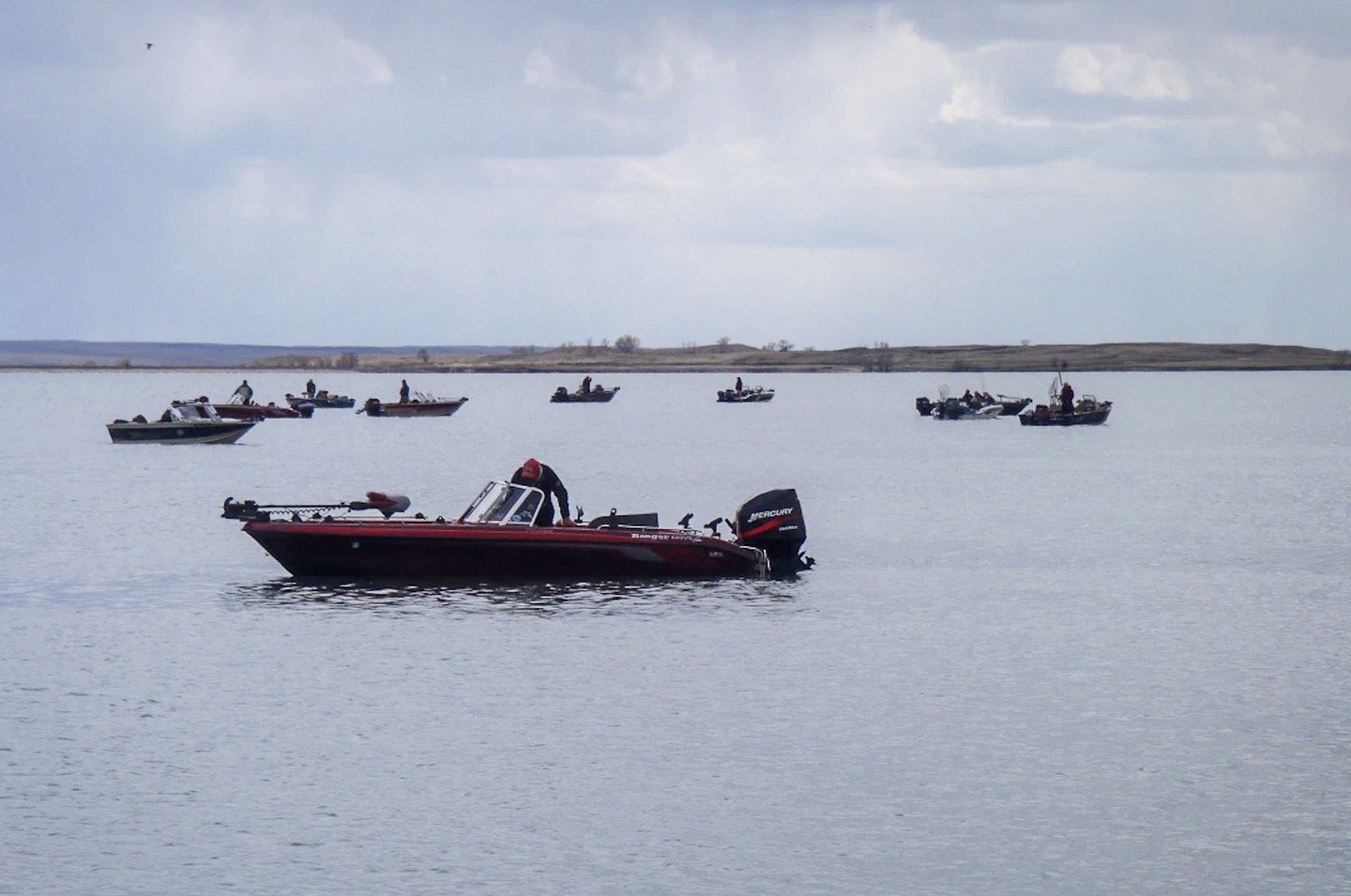 Jumbo Reservoir is popular among walleye anglers, but the state expects the reservoir to dry up completely in the near future.
SHARE

Late last month, the Colorado Parks and Wildlife department announced emergency public fish salvages for two reservoirs located on the state’s eastern plains. Fisheries managers expect Jumbo and Queens Reservoirs to dry up completely in the near future, and they are hoping the public can harvest as many fish as possible before that happens.

These announcements come as CPW has implemented both voluntary and mandatory fishing closures on trout streams throughout the state. The idea of closing some fisheries while declaring open season on others might seem contradictory, but these actions are merely different responses to the same problem. Many waterbodies in Colorado are either running dry or warming up (or both) this summer, and the state is doing whatever it can to protect its precious aquatic resources while still providing opportunities for anglers.

CPW implemented the emergency fish salvage at Queens Reservoir starting on July 21. All bag and possession limits, along with fly-and-lure restrictions, have been lifted. Anglers are still required to use legal fishing methods and possess a valid Colorado fishing license.

Fed by a series of canals that divert the Arkansas River, Queens is one of several storage reservoirs that makes up the Great Plains Reservoir system. The agency explained in July that this wouldn’t be the first time the warm-water reservoir has run dry. It dried up in 2005 and stayed that way until 2015, when CPW “rebuilt” it by refilling the reservoir and stocking it with crappie, bass, walleye, and other warm-water species.

Now water managers are saying that due to the ongoing drought and increased demands from irrigators in the region, “it appears the reservoir may run dry again.”

The emergency fish salvage at Jumbo (Julesburg) Reservoir was implemented four days later, on July 25. Just like at Queens Reservoir, CPW lifted bag limits and lure restrictions at Jumbo, adding that the public salvage could be rescinded if heavy rains come and water levels rise. For now, though, the agency expects water levels at Jumbo to drop below the boat ramp by sometime in early August.

Jumbo Reservoir receives a high amount of fishing pressure, according to CPW. The Colorado Walleye Association held a tournament there in May, and fisheries managers already expect they’ll have to rebuild the fishery when water levels return.

“It is very unfortunate to possibly lose such an incredible and popular fishery,” said fisheries biologist Mandi Brandt. “The fishery plays an important role in the local economy.”

Michelle Stang, the executive director of Sedgwick County Economic Development, sounded even more concerned about the loss of water at Jumbo during an interview with the Colorado Sun.

Leave ‘Em Be After Noon

The megadrought that is sapping Colorado’s reservoirs is also affecting some its most popular trout streams. Along with the summer heat wave currently hitting the greater Southwest, the historic drought has caused water temperatures in many of these rivers to rise to dangerous levels.

By the end of July, CPW officials had ordered voluntary fishing closures across several waterways, including the Fraser, Colorado, Eagle, Animas, San Juan, and Dolores Rivers. These voluntary closures were in addition to a mandatory full-day closure that was enacted in June on a well-known stretch of the Yampa River near Steamboat Springs.

The state’s main request has been for anglers to stay off the rivers after noon, when the streams are at their warmest. The agency explained that on some segments of these rivers, water temperatures have been hovering around 71 degrees. Most fisheries biologists agree that trout start to become stressed when temperatures rise above 67 degrees.

For the most part, anglers and outfitters in the state have agreed to honor these voluntary closures, and many fishing guides are taking proactive measures to protect the resource. This includes starting their days earlier and moving to higher elevations to fish as water temperatures rise.

“We can all do our part by using a stream thermometer and focusing on higher-up and colder fisheries,” reads a July 24 fishing report from Taylor Creek Fly Shop in Basalt. “The moral of the story is when in doubt, you should head up in elevation, pay attention to temperatures, don’t play fish to exhaustion and enjoy your time on the water while putting the fish first.”