Lessons from the Trout Ninja: How to Catch Monster Brown Trout in Small Streams 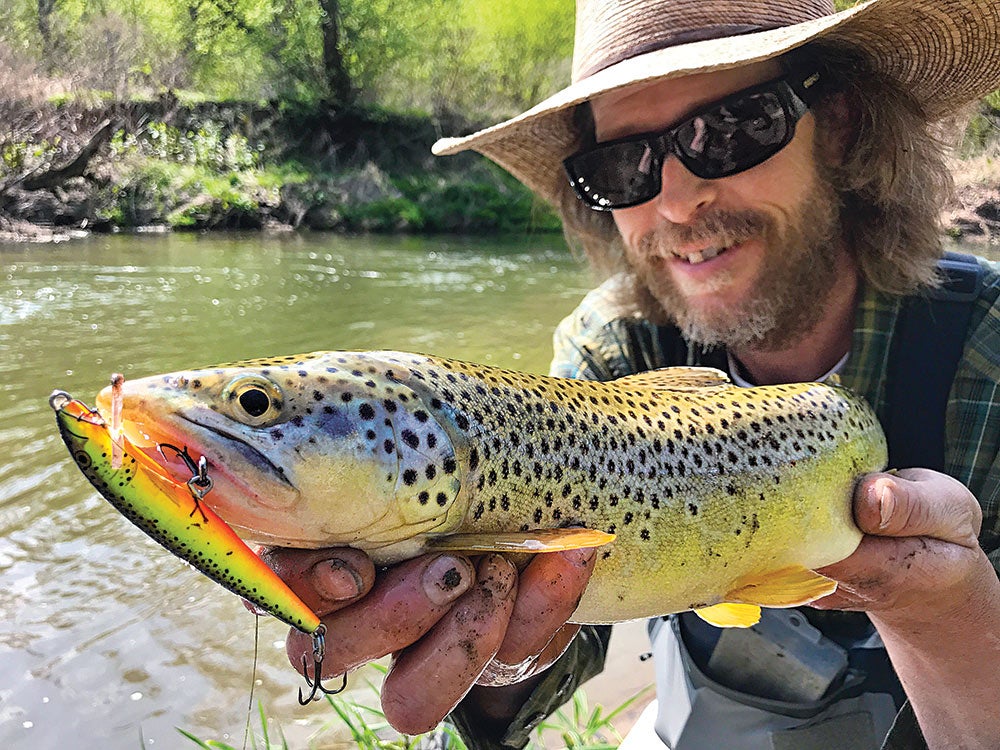 Dave Strom is twitchy yet focused. He’s dialed in yet always willing to experiment. He’s been fishing the small streams of Iowa’s Driftless Region his whole life, and to call a trout outing a success by his standards, he needs to land a brown measuring 24 inches or better. Strom, 44, has done this many times—his personal best measured 30 inches and weighed 14 pounds. I had the chance to fish with Strom last spring, and his aggressive strategy for trout fishing on small waters was unlike anything I’d ever experienced. He is a master of maximizing trophy opportunities, even when he only has a short time to fish. No matter where you chase trout, adopting some of his plays can lead you to fish of a caliber you may not have even known existed on your home waters.

Trophy-trout victory begins with focusing on where trophy trout thrive. Strom has figured out that that is often in the lower third of any given stream. “This isn’t the pristine trout stream experience,” Strom says. “The lower part of the rivers I fish are usually silted in. The bottom is muddy. The current is moving slowly, and you have a lot more trees in the water.” Many anglers overlook these low ends, assuming there are fewer trout living in them. They’re correct, but Strom isn’t looking for numbers. He knows that a hole in the weakened flow, often with stained water and abundant cover, is more likely to hold one or two giants than the prettiest clear pool miles upstream. Fishing low also gives Strom the opportunity to have miles of water practically to himself.

Strom calls himself a run-and-gun trout fisherman. He’s tall and lanky, and grew up in the woods, which means he can skip across mud banks and through scrub like his feet aren’t touching the ground. His goal is to hit the maximum number of likely trophy spots in a single visit, which may only be for a few hours after work. Whenever possible, Strom keeps his distance and “airmails” his lure a long way to reach the sweet spot in any given location. In a hole with depth and good cover, he might cast four times; in a slight depression or pocket with no cover, he’s only casting once or twice. He knows that if a big trout is home and willing, it’s going to react very quickly, so there’s never a reason to beat on a spot for a long time. If he turns or misses a trout, he moves on immediately, giving the hole at least a 20-minute rest before hitting it again.

Read Next: The Best Kept Secret in the Trout World

During my visit, Strom tied on everything from 6-inch soft-plastic swimbaits to paddle-tail shads with a big Colorado blade at the nose. He’s always looking for the next great big-brown bait, but his most consistent producer is a 5 ½-inch No. 14 Rapala Husky Jerk. Always working down-current, Strom is positively violent when he retrieves, reeling at warp speed and snapping his rod hard. In his experience, the flash of a jerkbait being worked this way is what triggers the biggest fish—even those that have just eaten. It’s not about making a fish want to feed, but rather playing to its natural predatory instincts, which Strom knows can’t be done with tiny lures and flies as easily. “When people see me on these small streams with a big Husky Jerk tied on, they snicker,” Strom says. “I just think, Okay, have fun catching your little 10-inchers.”