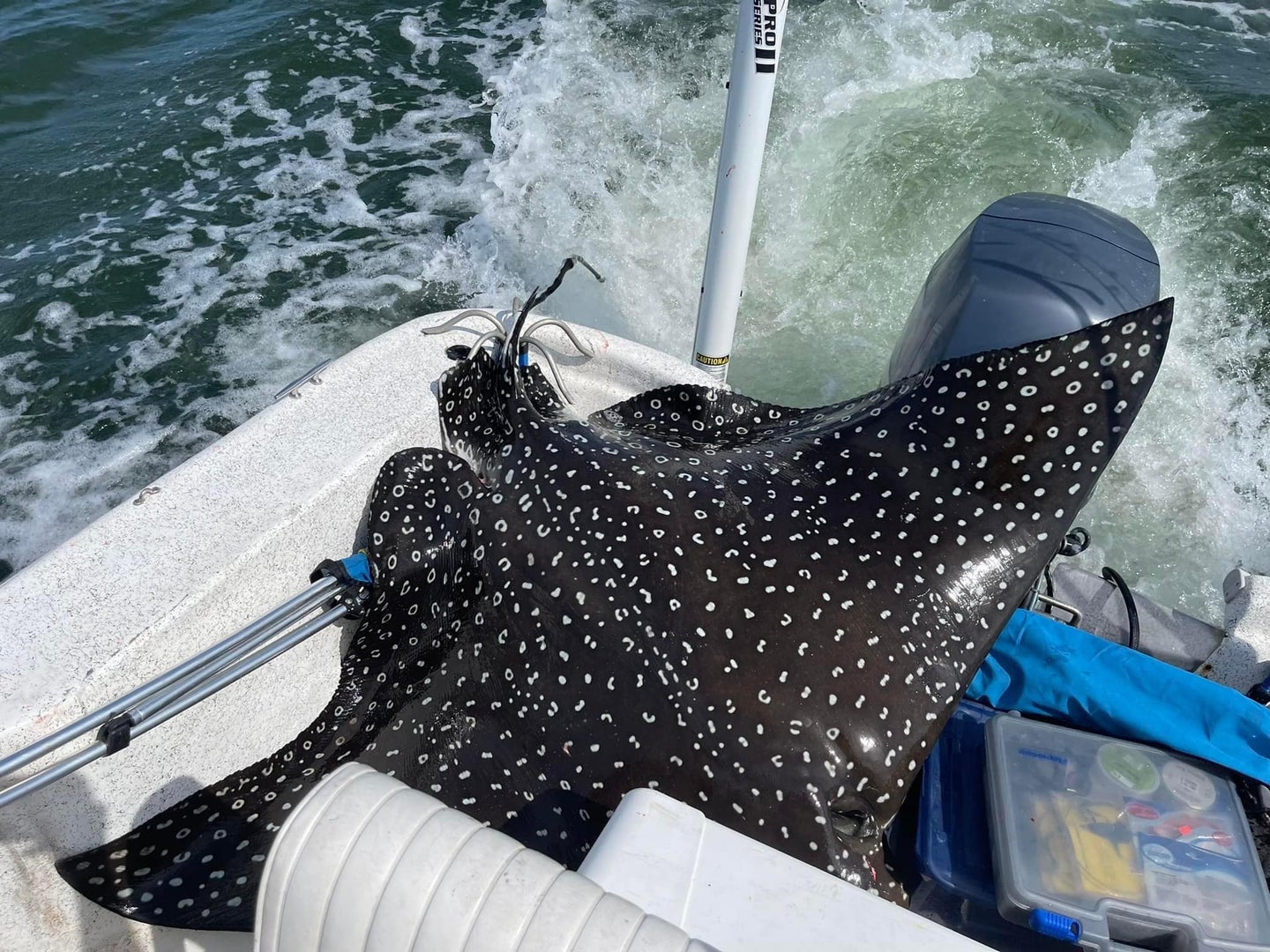 Unfortunately for April Jones, fish were jumping into the boat over the weekend. Jones, of Saraland, Alabama, was fishing in the Gulf of Mexico with her husband Jeremy Jones and other family members when she was suddenly decked by a giant spotted eagle ray.

The anglers were participating in the popular Alabama Deep Sea Fishing Rodeo, and at the time they were running to a new fishing spot near the Sand Island Lighthouse, which is located off the mouth of Mobile Bay. Jones said the boat had just gotten up on plane and leveled out when the ray leapt out of the water and collided with her.

“I thought we hit a wave,” April told AL.com. “Water came in, I felt something hit me. I told my husband I must have blacked out for a second, because I didn’t know what was going on, anything like that, and I hear banging and clanging in the back of the boat.

“My son was screaming, my husband was like, ‘What is that?’ His grandfather was in the back with him. They were freaking out, wondering what it was. The three of them thought it was a shark, I didn’t know what it was, I just saw a blob.”

The flopping and crashing eagle ray weighed an estimated 300 pounds and had a five-foot wingspan. The thrashing ray caused instant pandemonium in the boat.

“She was flapping around in the boat trying to get out,” April told reporters. “She’s on the back of the boat, there are waves coming into the boat. We didn’t know if it was going to sink or not. It’s a small boat.”

The ray finally wedged itself in the stern, and Jeremy got the boat under control and headed to nearby Dauphin Island for help. There, folks on shore helped move the massive ray out of the boat and into the water, where it swam away. The giant ray turned out to be pregnant, and it left behind four pups that eventually died. The pups will be preserved as displays at the Dauphin Island Sea Lab, according to AL.com.

April was then taken to a local emergency room to get her injured shoulder looked at.

“My shoulder was kind of swollen up and I was in quite a bit of pain,” said April. “I think once the adrenaline wore off, that’s when the pain hit. I told the ER people, no one’s going to believe this, but I have pictures.”

The spotted eagle ray is found in tropical waters of the Atlantic, Pacific, and Indian Oceans. They can have up to a 10-foot wingspan and weigh up to 500 pounds. Rays commonly leap high and far. While eagle rays have a venomous stinger at the base of the tail, their most lethal trait to humans is their incredible jumping ability, which is well documented.

15 years ago, a woman in the Florida Keys who was riding in a speeding boat was killed when a jumping ray collided with her. That ray reportedly weighed just 75 pounds. The ray that slammed into Jones was several times larger than that. Luckily, the Jones family was not running full speed at the time of the collision.