What do you get when you cross a premier sportfish with a cussed-at nuisance species? A darn fine fishing adventure 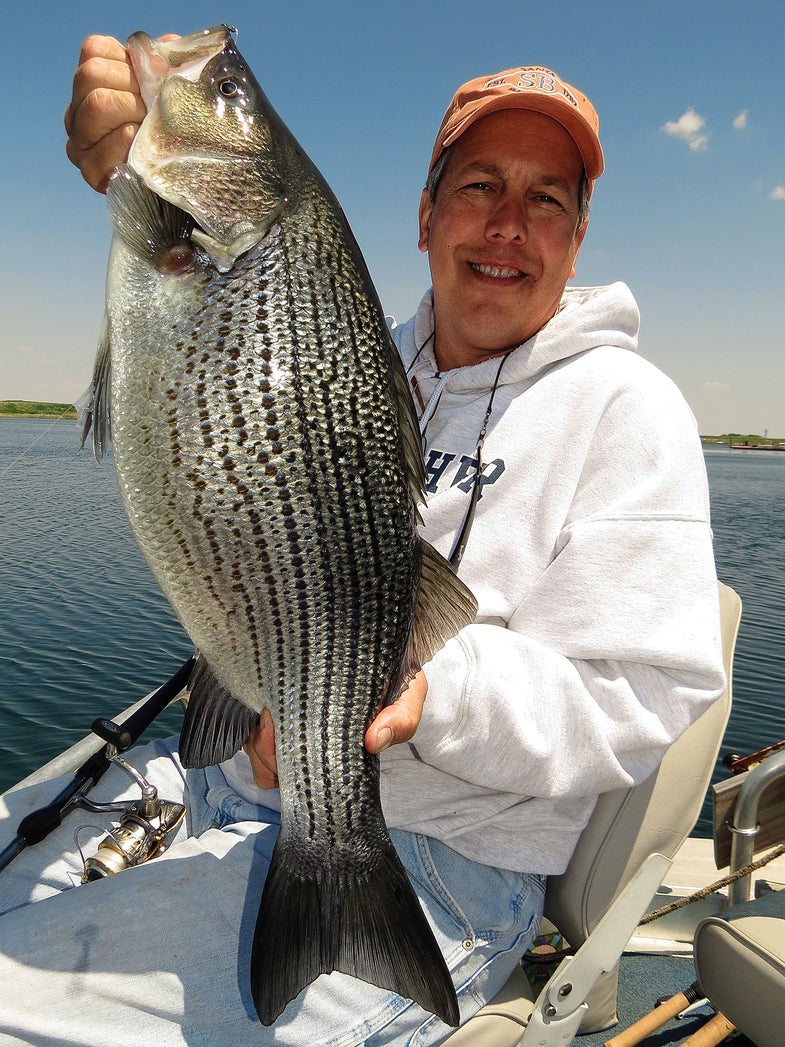 Hybrid stripers have identity issues—and, to an angler, it almost seems as if they’re angry about it. One parent, the striped bass, is a premier sportfish that can grow in excess of 80 pounds; the other, the white bass, rarely tops 3 pounds and is sometimes thought of as an angling nuisance. Yes, hybrids are misunderstood right down to their many monikers, which include everything from wipers to hybrids, palmetto, Cherokee, and sunshine bass to many names that are often much worse. For our purposes, we will refer to them as wipers.

One of my first encounters with these hard-charging fish took place nearly 20 years ago, while I was fishing for purebred stripers on the Cumberland River with legendary Tennessee guide Ralph Dallas. My fishing partner, Paul Bristow, and I had had our most memorable striper outing to date. We landed six trophy fish from 38 to 52 pounds, and had several other monsters blow up on our baits, adding to the day’s excitement. When torrential rains muddied up the river the next day, our striper hopes were dashed.

Not ready to cut our trip short, Dallas suggested fishing from shore at either nearby Center Hill Lake for black-nose crappies (another hybrid species) or for wipers at Percy Priest Lake. With reports of 20-pound wipers coming from Priest, the decision was easy. First, though, we made a quick stop at the tackle shop for some gear and the grocery store for chicken livers. Those were not for snacking—wipers have an affinity for strong-smelling baits.

Arriving at Percy Priest Lake between storms, we each rigged one rod with a chicken liver to soak on the bottom while reserving another for working Rat-L-Traps. As the sky turned eerily yellow, the reel on my set rod began to sing—line was seemingly evaporating off the spool. On 8-pound-test monofilament, the fight was long and intense. It took more than 10 minutes before the wiper showed signs of tiring, nearly spooling me twice. Paul and I were dumbfounded. That was then.

Anyone familiar with wipers nowadays will attest to their being among the hardest fighting and most challenging fish to catch. With speed and endurance rivaled only by salmon, wipers grow quickly and hit a variety of baits, ranking them high on any angler’s must-catch list.

To take fish consistently, however, you must always be mindful of both their striper and white bass roots. Wipers are primarily open-water feeders. They are a schooling fish looking to prey on large concentrations of shad or other select forage that gets funneled into current seams and eddies below dams and tailrace areas. They quickly slash through bait balls and then circle back with lightning speed to scarf up the wounded baits.

Playing to these traits, anglers should work lures high and fast in the water column to be successful. Wipers are notorious for busting shad on the surface. Here, packs of fish corral pods of shad and force the shad to a barrier they can’t escape from—the surface. Circling or diving birds are the first sign that you need to get to an area quickly. By the time busting fish are visible on the surface, the feeding frenzy has already begun. Most any lure will work in the midst of these melees, but a walk-the-dog-style surface lure, such as a Heddon Zara Spook or Rebel Jumpin’ Minnow, is tough to beat.

Catching one wiper on a busting school of bait is like shooting fish in a barrel. The real measure of success comes from being able to stay with the school and catch multiple fish. To do so, be observant of the fishes’ activity. Don’t run right over the top of them. This will scatter the baitfish and make them sound. Keep your distance and pay attention to which direction the school is moving. Position the boat a long cast from breaking fish, and target the front of the pack.

Once wipers stop chasing surface lures, switch to a jig or spoon that can be presented vertically in the water column.
Keep baits moving and high in the water column. Wipers are visual feeders. They attack upward. Lures beneath their line of vision go ignored. For this reason, you’ll benefit from using side-imaging sonar to track baitfish schools.

Absent a high-end graph, start by making a long cast with a spoon like a ¾- to 1-ounce Kastmaster. Count the spoon down to the desired depth and increase your descent count with successive casts. These compact spoons cast like a bullet even into a stiff wind. They fall with a back-and-forth wobble and dart erratically on the upstroke of the rod.

No matter where the opportunity arises to catch wipers, jump on it. With a handful of lures and a tub full of chicken livers, you have a chance at tangling with one of the toughest fish in North America.