Florida Anglers Are Asking For a Goliath Grouper Season, But it May Be Too Late

Goliath grouper populations are booming in Florida, diminishing the diversity of inshore fisheries 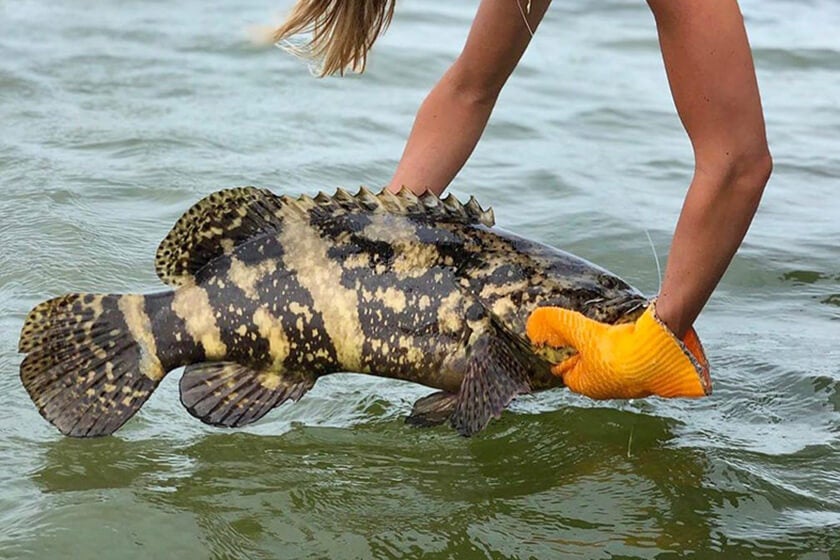 “Conservation is not about closing a resource forever; it’s about closing it as a management measure and giving access back when we can,” said FWC Commissioner Robert Spottswood. “I believe we are at this point, and it is a small and productive step in the right direction.”

Indeed, the proposed goliath harvest will be restrictive, limited in duration and very expensive for anglers. It’s proposed to open in 2023, with surely some regulation tweaking and lots more input coming from fisheries folks, commissioners, biologists, anglers, guides, and others before it’s reality.

The proposal is for a lottery of 200 Florida goliath harvest permits, one per person, with a trophy fee of $500 per tag. It’s slated to run from March to May, hook and line only, with a goliath slot limit for fish somewhere between 20 and 36 inches long.

Such grouper in the 20-to-36-inch range are minnows of the goliath species, since they grow to 800 pounds and 8 feet long, during decades of living, growing, and feeding on Florida reefs. The IGFA world and Florida record for goliaths is 680 pounds, caught off Fernandina Beach (on the Florida-Georgia state line) in May 1961.

Goliaths have been protected by the state from harvest (catch-and-release is allowed) since 1990. So an opening in 2023 will be the first time in 33 years the oversize bottom-dwelling, reef-living fish will be available for harvest.

It’s about time, say many Florida anglers, guides and divers, who have been dealing with a booming and now overwhelming population of the giant predators.

Capt. Scott Goodwin, who has been working full time on charter boats out of the Cape Canaveral area on Florida’s east-central coast for over 30 years, thinks it’s too little, too late.

“Goliaths have taken over many of our shallower wrecks that were fishing favorites,” says Goodwin. “Anglers are now faced with the challenge of battling goliaths in the shallows or hordes of red snapper and sharks in the deep [reefs]. It has made catching a legal fish for dinner a serious dilemma. Goliaths have increased in size, numbers, and ferocity to the point that spearfishermen say it’s not safe and anglers lose the bulk of the fish they hook.

“Goliath numbers have diminished the fish diversity on many of our inshore wrecks. The talk of culling a mere 200 small ones is as much of a joke as a three-day red snapper season [in Florida]. Anglers are all for conservation, but what they are calling a [goliath grouper] season is totally useless and just meant to ease the public pressure mounting on them. Just like red snapper mismanagement, fishery managers are missing the boat on this one too.”

“Goliath grouper are a prime example of a predator that has been over-protected and, as a result, they have depleted a wide variety of marine resources. Goliaths are voracious feeders, and they have been conditioned to target species that are hooked and thus restricted in their ability to avoid capture.

The Perspective From Local Fisherman

“I’ve had 300-pound goliaths come to the surface and eat whole bull redfish [25 to 45 pounds] right at the boat at the mouth of the St. Johns River. Goliaths to 400 pounds have been seen several miles up the river, eating bull redfish near the Dames Point Bridge.”

Capt. Earle Waters is a popular guide most noted for Homosassa, Florida, flats fishing for giant tarpon, as well as working the keys for permit, bonefish, and other species with fly tackle. Waters hopes that the goliath harvest will save a few tarpon.

“For years I had fishing clients out of Big Pine Key in the Florida Keys. We often stopped at a few spots to catch mangrove snapper on our way home to feed a few people that night. But about 7 years ago when we stopped at these places we could not get them to the boat before goliath grouper would eat them. The tackle we used for snapper wouldn’t  slow down even a 15-pound grouper. If we rigged heavier tackle, the snapper wouldn’t bite, not to mention how the numbers of snapper have dropped off. If we could have kept the goliath grouper, I’m sure they would have tasted like mangrove snapper, as the number of grouper that have moved under the mangrove shorelines have even taken away from our juvenile tarpon fishing. Yes, they [goliath grouper] eat tarpon, too.”

Capt. Don Dingman is a wide-traveling marine angler living in Florida and host of the popular “Hook The Future” TV fishing show. He fishes throughout the state inshore and offshore and has had many run-ins with goliath grouper.

“Wreck fishing for permit is especially difficult because there are so many goliath grouper around all the wrecks. You’ve got to adapt your fishing methods if you hope to have any chance of catching a prized permit from a reef because grouper are so aggressive to eat a hooked fish. It’s really urgent to get a hooked permit—or any other fish—away from a wreck or reef to prevent that fish from being stolen and eaten by a goliath grouper.”

“A few years ago we were fall fishing an inlet jetties and constantly loosing big sheepshead to what we thought were sharks. Finally, we saw a big brown fish come to the surface near the boat and eat a hooked sheepshead we had on. It was a 300-pound or better goliath grouper.”

Capt. Rufus Wakeman, long-time and noted charter captain headquartered in Jensen Beach, however, has the best eyewitness account of all.

“One day off [the town of] Stuart we were on a reef chumming for sharks and looking to catch cobia that follow them. We had our Minn Kota [electric motor] ‘Spot-Lock’ on. All of a sudden, the boat lurched and there was a big slash up under the bow. We saw a large goliath grouper swim away and the electric motor was vibrating so I pulled it up. The grouper had grabbed the lower [electric motor] unit and tore off a prop blade. Goliaths are aggressive beasts.”