Half the battle was finding a large enough scale 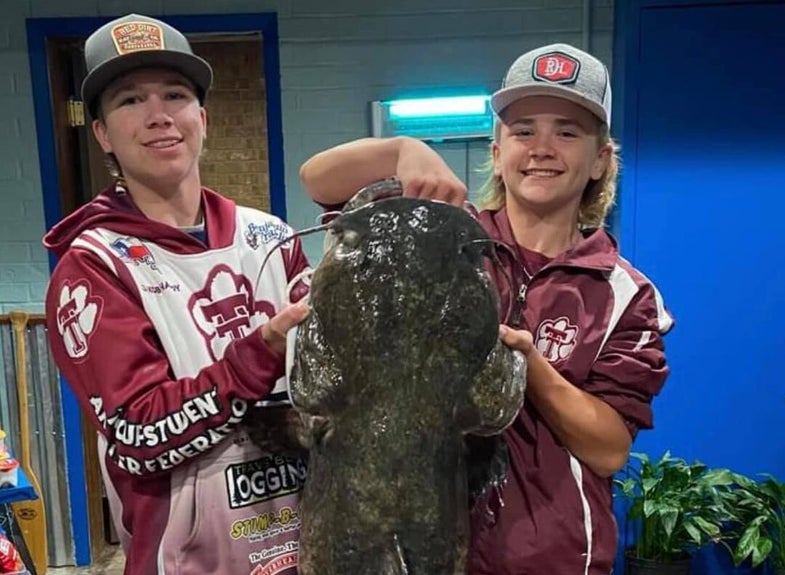 Jakob Hardy, 14, and his friend Luke Skillern, 13, were enjoying a pal’s birthday party at an RV campground near the Lake Tyler Marina, located in East Texas’ Smith County. It was about 9 p.m. and the boys, both from the town of Troup, thought they’d toss out a line in the nearby 2,200-acre reservoir to see what they might catch.

“They used a perch for bait, and a really light fishing rod and reel, just fooling around like youngsters do,” says Wendy Midtgard, a 3-year employee of the marina.

They cast the bait out, and it wasn’t long before they had a battle on their hands.

“We actually threw it [the bait] out there intentionally as a joke, because we were like we’re not going to catch anything big right here,” said Hardy, according to TV FOX51 in Tyler. “We didn’t use the size hook we should have.”

“We finally got a bite, then it was a feeling of accomplishment that we could finally get it done,” Skillern said.

The heavyweight catfish was over four-feet long, requiring both boys to haul it ashore. Hardy had to summon his father for help.

“When he called him, he didn’t really think it was big,” Hardy reportedly said.

“I think he [was] thinking around 25- or 30-pounds, somewhere around there,” said Skillern.

The boys wanted to weigh the catfish, but it wouldn’t fit on the Tyler Marina scales, says Midtgard.

“We didn’t know what to do, and it sure is one of the biggest catfish I’ve ever seen caught from the lake,” she said. “So we wanted to get it weighed.”

Finally, a bathroom-style scale was found, and the still-alive catfish was weighed several times to get a good tally on its heft.

“I weighed it three times, and each time it scaled 55 pounds,” said Midtgard. “Neither of them were the birthday boys, but they sure stole the party by catching that catfish. Everyone was pretty excited about it.”

Photos were made of the happy local teenagers hefting their oversize catfish, then they rushed it back to the water’s edge and released the fish into Lake Tyler.

Their catfish isn’t a lake record, since it wasn’t weighed on certified scales. And it’s still a ways off the 98.5-pound Texas flathead catfish record. But it was a birthday party catch that won’t easily be forgotten.

“Their picture with the catfish is going be hanging on our Marina wall for a long time,” says Midtgard.