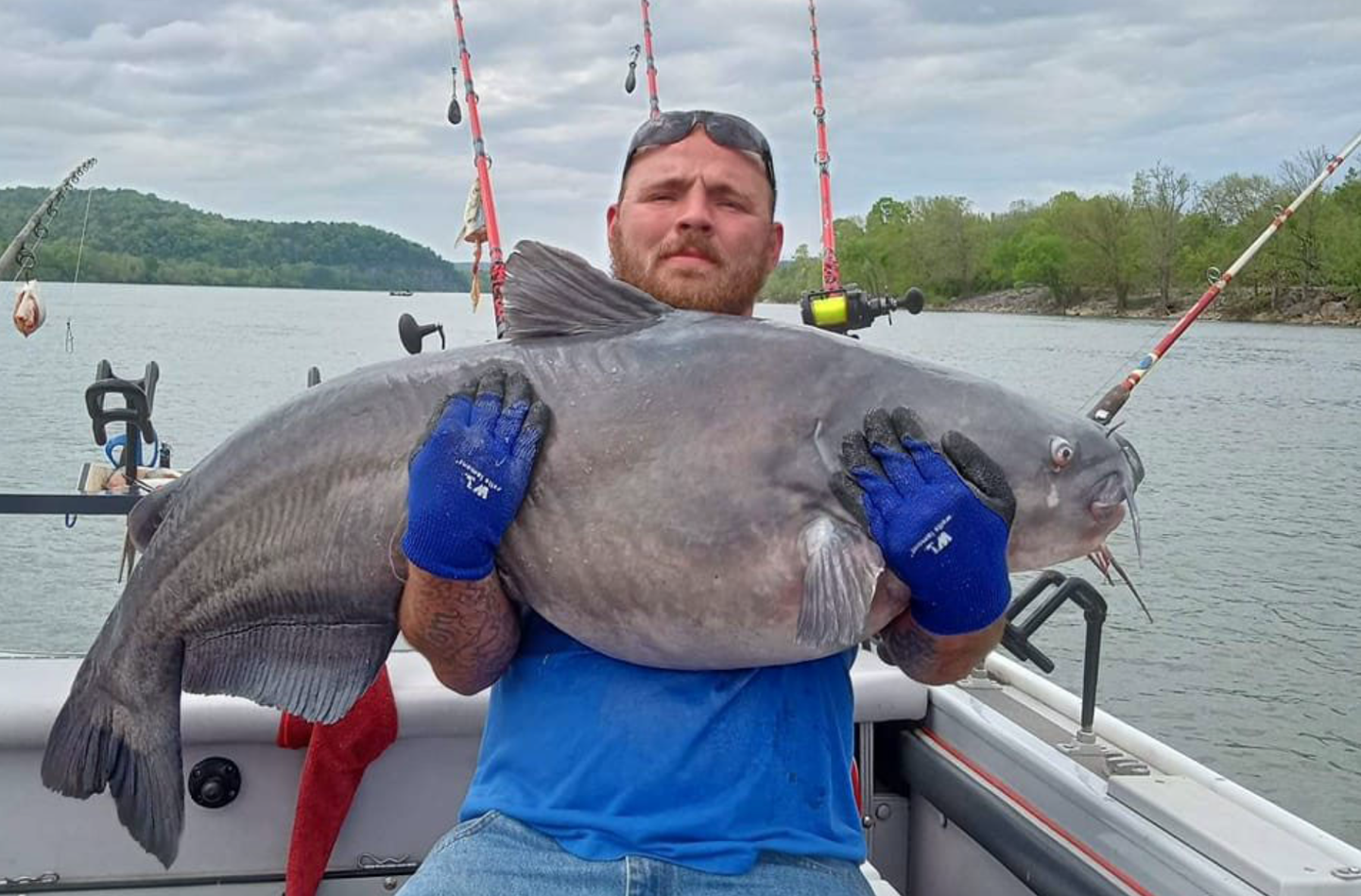 On Easter Sunday, Mike Graham was fishing with his friend Mark Beyo in one of their favorite deep holes on the Tennessee River below Wheeler Dam—located in Rogersville, Alabama. The spot has yielded some huge blue catfish for Graham during other trips, including one that weighed more than 90 pounds.

Using heavy tackle, 30-pound test monofilament line, and 18 inches of 80-pound test leader, Graham sent a live 16-inch white bass bait to the bottom of the hole in 27 feet of water. The bait was hooked with a single 12/0 hook through the fish’s back.

“It’s a deep hole great for big catfish, a place surrounded by shallower water 17 to 20 feet deep,” says Graham who is from Knoxville, Tennessee. “It’s a broken-bottom area, big rocks I think, and catfish love it.”

The pair of anglers fished for a time, and Graham got a strike from a heavy fish that stayed deep.

“The first 10 minutes of the fight were unreal, I just couldn’t budge the fish,” he says. “It took off, pulling drag. I’d gain 15 yards of line, and the fish would take 20 yards of line back off the reel. It went like that back-and-forth for 15 minutes.

Graham says the deep fish moved back and forth – upriver and down river – beside the boat. He couldn’t do much except keep putting heavy rod pressure on it. The fish just wouldn’t budge off bottom.

For a time, Graham thought the fish had become fouled in rocks and he was going to have to break the line with more rod pressure. Then the fish would move, and Graham stayed doggedly in the fish-fight game.

Finally, Graham got the cat moving toward the surface, where his buddy got a big net under the fish and pulled it close to the boat.

“Mark couldn’t lift the fish into the boat, so I laid my rod down and helped him muscle it inside so we could weigh it,” says Graham. “It was huge, easily the biggest catfish I’ve ever caught.”

Using a quality digital hand scale the anglers weighed the fish at 107 pounds, which is  massive, but still short of the blue cat records in Tennessee or Alabama.

Read Next: Two Kentucky Anglers Pull a Massive, 94-Pound Blue Cat Out of the Ohio River

After quickly weighing his massive blue catfish, Graham unhooked the fish, and released it back into the Tennessee River.

“Catching that giant catfish was like finding the prized golden egg on an Easter morning egg hunt with the kids,” said Graham. “I feel honored to have caught that incredible catfish, and I would have released it even if it was state record… A catfish that big is an old survivor.”