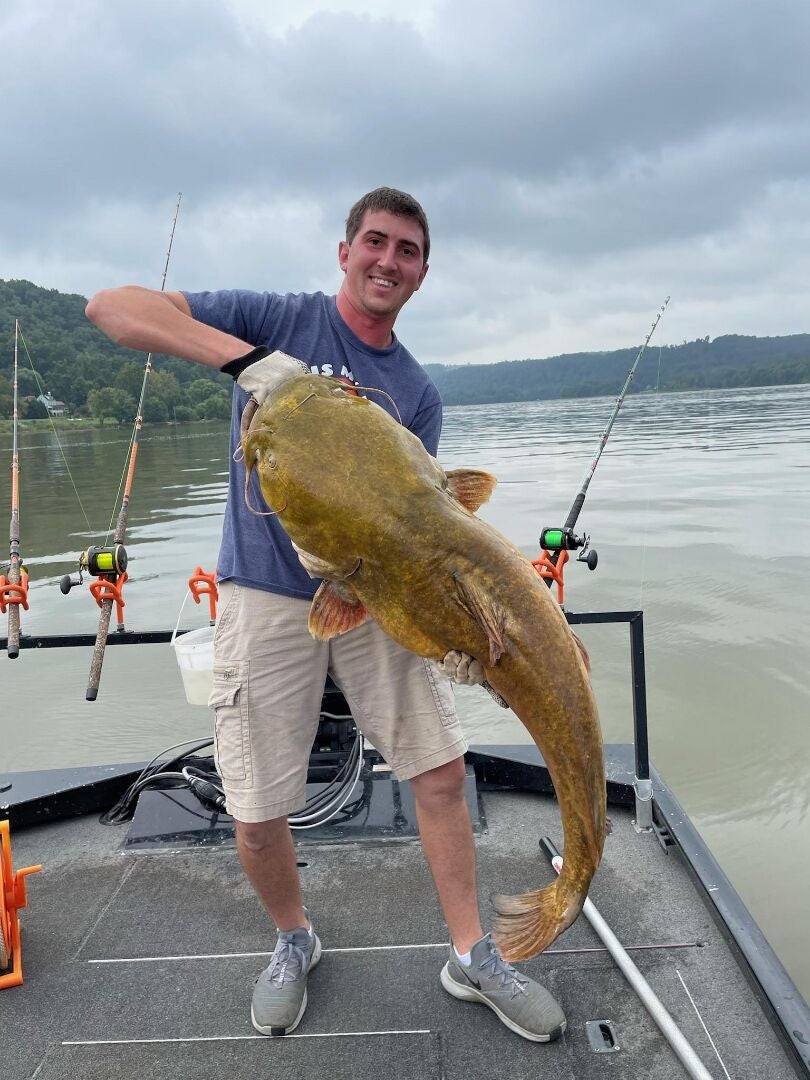 At the fourth annual Catfish Mafia Iron Man Tournament out of York, Pennsylvania, on Sept. 18, anglers Garrett Hollenbach, Ruth Osman, and Tom Prowant were rigged and ready for a full day of Susquehanna River action. But the fishing was slow for several hours—until Hollenbach got hungry.

“I was going for a sandwich when my rod started to peel drag like crazy,” Hollenbach told the Daily Item. “Tom was frantically telling me to look at my rod. It was just game-on after that. It was 15 minutes of pure abuse, saddling this fish.”

“It was a vicious bite and it took off running,” Prowant said. “We knew it was monstrous.”

Hollenback finally worked the fish close to their boat, and they knew he’d hooked a tourney winner.

“The first glimpse we got of the fish was just the tail. and as soon as we saw that, we were all in shock. We knew it was something huge,” Hollenbach said.

Once they boated the giant catfish, the friends realized it may be a record. Knowing they had to weigh the fish on certified scales, they futilely tried locating a nearby weigh station. Finally, one of their friends drove two hours to the river and delivered a certified scale to weigh the live flathead catfish. Their friend also brought Pennsylvania record fish application forms to enter the fish officially as a state record.

The catfish weighed 57 pounds 8 ounces, besting the current flathead catfish record of 56 pounds 3 ounces, which was caught in 2020 by Jonathan Pierce from the Schuylkill River.

“After all the measurements, we safely released it and it swam off healthy, back out to be caught again,” said Hollenbach. One quirky requirement for a Pennsylvania fish record is certified weighing must be observed by a Pennsylvania Fish and Commissioner.

“I got in contact on Monday with the head officer for the southeast [Pennsylvania] area,” said Hollenbach. “I explained what happened. We don’t have live wells big enough to keep a 60-pound fish alive [while waiting for an official witness].”

The anglers are hoping photos of the scales, witnesses, measurements, and video of the catch will prove sufficient for the state to approve Hollenbach’s massive 57.5 pound flathead as a new state Pennsylvania record.

If state officials approve the catch, not only would it beat the current flathead, but it could go down as the largest fish of any species ever recorded in the state. Hollenbach’s catfish is larger than any other fish in the Pennsylvania record book, including the state record carp at 52 pounds, and striped bass and record muskie each at 54 pounds. The team of anglers won first place for the tournament point series, but only seventh in the team overall due a poor evening fishing.

But Hollenbach is still enthused with Susquehanna catfishing.

“My wife and I were going to go down for a catfish date to see if we get some more big ones on the boat.”