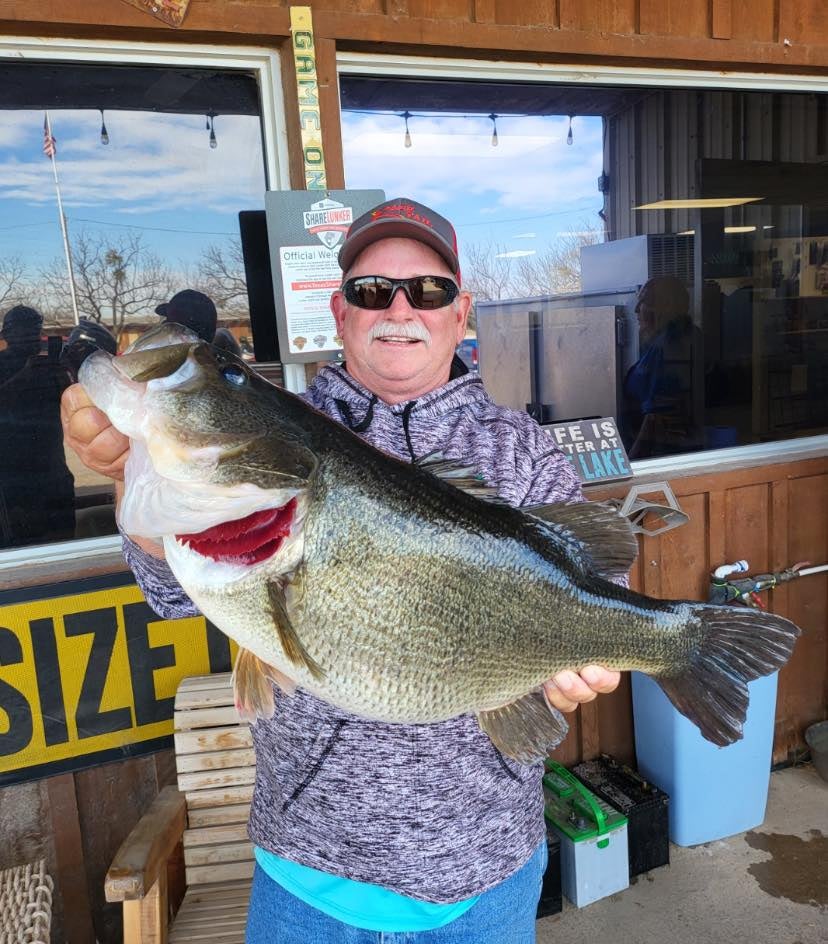 It didn’t take long for the first pair of Legacy Class largemouth bass of the 2022 Texas ShareLunker season to find their way into anglers’ boats. Tyler Anderson, from Austin, and Wendell Ramsey, Sr., of San Angelo, landed 14.48 and 14.92 pounders, respectively, during the first week of the season at O.H. Ivie Lake. The lake produced 12 of the 23 Legacy Lunkers caught during the 2021 season.

Texas Parks and Wildlife Department’s Toyota ShareLunker program runs year-round. The program allows anglers who catch bass over 8 pounds to loan these fish to TPWD, where they are added to the state’s selective breeding and stocking program that aims to enhance largemouth bass genetics in Texas lakes. To qualify for the Legacy Class, anglers have to catch a bass over 13 pounds and loan it to TPWD during the spawning period (January-March).

Tyler Anderson: Fish of a Lifetime

Anderson has always wanted to catch a 10-pound bass, and he hooked his Legacy Lunker on Jan. 5 while fishing an Alabama rig in about 28 feet of water. Anderson had set out to do a series of YouTube videos where he would spend ten days in search of a ten-pound bass. He began the series at O.H. Ivie, and on day two, the first fish of the day proved to be the fish of a lifetime.

“I stumbled upon a school of what looked to be eight or nine fish,” said Anderson. “My cast ended up being a little too short and landed right on top of where they were. My Alabama Rig fell right into the school of fish, but I didn’t even have to retrieve the lure. I lifted it right up and started my retrieve and the fish was already on there. I’ve known about O.H. Ivie for many years and last year’s success with ShareLunker’s reinvigorated my desire to get out there.”

Anderson told TPWD that he plans to continue his video series with some stops at additional lakes along the way. He only hopes that another lunker will land in his boat during the journey.

“I have wanted to contribute to the ShareLunker program for a long time,” Anderson said. “When I quickly weighed the fish in my boat and saw the scale, I told myself my fishing for the day is done with this lifetime catch. I headed into Concho and everyone there was great. It was all about taking care of the fish until TPWD personnel arrived. This fish did great, and we made the transfer for its trip to Athens.”

Wendell Ramsey: One for the Kids

Ramsey is a West Texas fishing guide. He has a lot of experience on different lakes, and he secured his Legacy Lunker using an umbrella rig with 3.5-inch rage tail swimmers on Saturday, Jan. 8. Ramsey was asked by a good friend to take their grandsons fishing that day.

“We started out working some spots for white bass and black bass to get a few bites for the kids and have a good time,” Ramsey told TPWD. “It was slow, and we moved around the lake to some different spots before we circled back to where we started. I spotted a fish suspended in about 14 feet of water and quickly grabbed a fishing pole. I sent the cast past the fish and slowly let it go down to about eight feet before I started reeling. The fish hit the bait and when I set the hook it didn’t budge so I knew it was a really big fish. The battle started and I eventually brought it into the boat with the dip net.”

Once the fish was in the boat, Ramsey could tell right away that it was over 12 pounds. But he had no idea the bass would top the 14-pound mark until he got it on his digital scale.

“I asked the boys to go with me and witness this whole process with the Toyota ShareLunker program, and I think they really enjoyed it,” he said. “While we waited for the truck to come pick up the fish, I took the boys back to their family’s boat to let them continue fishing. What a special time for me, and for them as well.”

Once TPWD Inland Fisheries biologists were notified Wednesday and Saturday afternoons, they quickly got on the road to collect and transport “ShareLunker 609” and “ShareLunker 610” to the Texas Freshwater Fisheries Center in Athens. Biologists will attempt to spawn these fish in order to make bigger, better bass to stock in Texas lakes.

“This is a great start to the 2022 collection season,” said Kyle Brookshear, Toyota ShareLunker Program Manager. “After the historic 2021 season, it seems fitting that the first two entries come from O.H. Ivie. Many predict another record season for trophy bass catches across the state, and with the 2022 season underway, time will soon tell.”