A pair of Santee Cooper anglers win a 20-boat tournament that weighed in 1,300 pounds of catfish—all of which were released 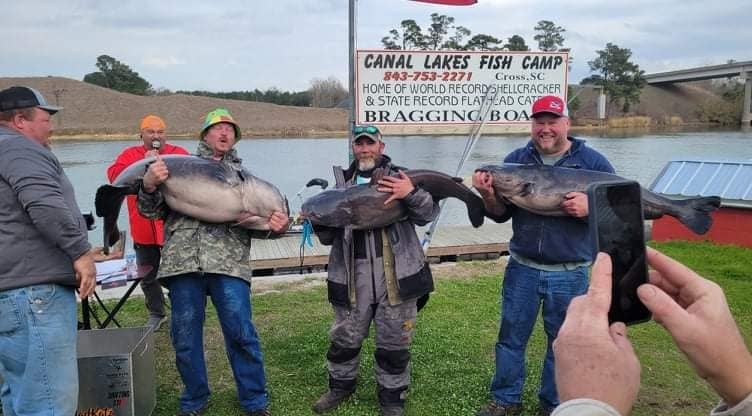 Angler Vern Reynolds caught a 106.62-pound blue catfish from the Santee Cooper Lakes in South Carolina on Jan. 15 to win the Santee Lakes Catfish Club tournament and a prize of $1,385. Reynolds and his teammate, Mike Durham, took the top spot in a field of 20 teams by weighing in three blue catfish for a total of 200.1 pounds, reports the Carolina Sportsman.

Teams were only were allowed to weigh three catfish apiece. Seventeen of the 20 teams weighed fish for a total of 1,330 pounds of catfish, according to SLCC president Ralph Willey, who said all tourney catfish at the weigh-in were released back into the lake. Seven teams each weighed more than 100 pounds of catfish in the tournament.

“Even more catfish were caught than the 1,330-pounds tally,” Willey. “Only the three largest cats from each boat were weighed in the tournament. But plenty more were caught.”

“January, February, and March are really good months for big catfish on Santee Cooper,” says Willey. “Last year we had an event in February [where] the three-fish winners totaled 178-pounds, with a 103-pound blue catfish.”

The SLCC hosts eight catch-and-release catfish tournaments each year on the Santee Cooper Lakes. But the recent Jan. 15 catch of three catfish fish weighing over 200 pounds is a record for their events. The biggest tournament of the year is the “Santee Big Cat Brawl,” which is slated for Mar. 18 and 19 and expected draw of more than 100 teams from the Carolinas.

All catfish are caught with rod and reel—none with set lines—by anglers who are experienced at taking oversize whiskered fish.

“The Durham-Reynolds team lost their sonar during the fishing day and only had to rely on fishing contour lines to boat their 200-pound haul of blue cats,” says Willey. “Those guys are really good at catching cats.”