4 Public Land Deer Hunting Tips You Can Use Right Now

Make your fall hunt more productive by scouting this spring 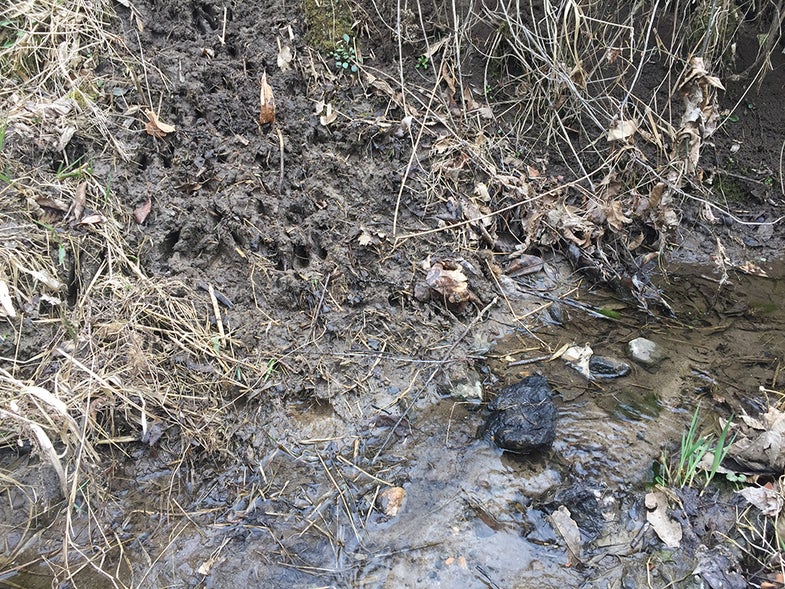 Heavy crossing such as this one are worth a waypoint on your GPS unit. Tony Hansen
SHARE

When the snow piles up, as it does far too often here in Michigan, I find myself counting down the days until warmer weather returns. When it does, the countdown resets with a new end date: Bow season.

This year, both countdowns seem to take a bit longer. I’m more than ready for spring to arrive. And this fall I’ve got a darned good change of drawing a coveted archery tag for Iowa’s whitetail season.

With a once-every-four-years tag on the line, the next few months carry just a bit more importance. My plan is to hunt Iowa at least twice: once in October and again in November. If necessary, a December visit might be in the cards as well. One of the greatest challenges of a DIY out-of-state hunt is time management. You only have so many days to hunt and so many hours of daylight in each day. Scouting is critical to success. But too much scouting can cause you to come home empty-handed.

That’s a lesson I’ve learned the hard way and one I see repeated all too often. The majority of my away-from-home hunting time is spent on public land. In Iowa, public ground is in short supply, which means it can get crowded. Nothing can suck the time out of a hunt more quickly than having to scout for new stand locations after your first option (or two or three) is spoiled by hunting pressure.

I’ve had that happen more times than I care to recount once the season opened, and I’ve wasted far too much time scouting for locations when I should have been hunting. This is where pre-season scouting can pay off in a big way. But finding the time to scout before the season opens can be tough. Especially if the area you need to scout is located a day’s journey from home. Summer is a busy time for everyone. It’s also a terrible time to decipher deer sign. The foliage is thick, the air is filled with bugs, last year’s rubs and scrapes are nearly impossible to find, and fresh sign is not yet available.

The solution? Scout now. Shed hunting and turkey hunts create ideal opportunities to cover plenty of ground in preparation for deer season while providing you with a valid reason to make the trip. Here are four things I look for when spring scouting for new ground that I won’t hunt until fall.

Obviously, deer tracks always catch my eye. But what I’m really looking for are concentrations of tracks that relate to some sort of terrain feature.

In Iowa, those take one of three forms: ditch or creek crossings, the head of ditches/ravines, and fence crossings.

The area of Iowa that I’ll be hunting is hilly and full of ditches. These steep-banked impediments play a major role in steering deer movement. I’m looking for places where deer cross the width of the ditch. I’ll also cut along the ditch until I find the head where the ditch begins. There will almost always be a solid deer trail found there.

That said, my favorite public-land locations are fence crossings. Why? Because there are fewer of them, and they’re often overlooked by other hunters. Fences are abundant in Iowa, even on public land, and not all of the fences mark the boundary between public and private land (in case you thought I was trying to sit right on a property line). One of the best locations I found during this spring’s shed hunt was a fence crossing deep in a large area of public land. The fence, an apparent remnant from before the ground was public, featured five, tight strands of barbed wire. A tree limb had dropped from one of the area’s many oaks and landed on the fence. The deer crossing sign was impressive—and I saw zero evidence of any other hunters in that area.

Terrain features are far more reliable clues than any other sign such as rubs and scrapes when it comes to indicating predictable, repeatable paths of travel for deer. A ditch is as much of a ditch in March as it is in November. And deer will cross it at the same spot, in the same manner all year long. The same goes for creek crossing and fence crossings.

2. ADMIRE RUBS AND SCRAPES – BUT DON’T BANK ON THEM

No one loves finding a giant rub more than I do. Same goes for deep, well-worked scrapes.

I love to find them whether it’s spring of fall. But I put very little stock in them before late October. In other words, I was happy to find some big rubs and plenty of scrapes while scouting this spring. But that sign won’t have any bearing on where I choose to hunt this fall unless it was located near an area of concentrated travel.

Why? Again, it’s simply a function of efficiency and time. I’ll have, at best, a week to hunt in October and a week in November. That’s not a whole lot of time, especially when you factor in time lost due to less-than-ideal weather conditions that could minimize deer activity. Setting up in an area that held a plethora of rubs and scrapes in March is a gamble—that area may or may not be holding bucks again in the fall. And wasting even a day hunting that area before realizing that it isn’t is too much time.

Rubs and scrapes located near an area of concentrated deer movement created by a terrain feature get my attention. That sign tells me that not only are deer using that corridor of travel in the spring, they also used it last fall —and some of those deer were big bucks.

3. SHEDS TELL YOU A BUCK WAS THERE—AND NOT MUCH ELSE

Finding a shed antler is one of spring’s greatest rewards and my buddy Kyle and I looked hard for them during our scouting trip. We found a total of three in about 15 hours of walking (which is three more than I found in an entire spring of looking in Michigan last year).

Shed antlers are cool. They do tell you that a buck was in the area when it dropped the antler. It’s also proof positive that the buck survived the recent hunting season and should be back in the fall, a year older and a year bigger.

That said, my approach regarding sheds on public land is much different than when they’re found on private land. On private land, I usually have a pretty good idea of how the ground was hunted during gun season (the period of highest hunting pressure) and where the best late-season food sources were.

On public land that’s far from home, I usually don’t have more than a guess as to the amount of hunting pressure the area received when I wasn’t there. Nor do I often know what food was still available in January and February when most antlers are shed. Why does this matter? Simple: Hunting pressure moves deer. Food sources dictate where they stay once that pressure recedes.

Iowa’s shotgun season takes place in December. It’s the most popular deer season in the state and public land sees plenty of pressure. In order to shed, a buck has to first survive the hunting season, then he has to survive the winter. To survive hunting season, he needs to find an area with reduced hunting pressure. To survive the winter, he has to find food. Both of these scenarios can put bucks in areas that aren’t their normal October/November hangouts. So while I get excited when finding a shed antler, I don’t necessarily anticipate hunting that same buck in the area where the shed was found simply because that buck may not hang out there until winter arrives again and hunting pressure increases.

This final tip is one borne of efficiency. The entire time I’m scouting, I’m constantly using a phone app to track my location on an aerial map and noting areas of concentrated tracks, rubs, scrapes and—most importantly—stand sites.

I have wasted far too many hours walking around in a circle with my head tilted skyward trying to find a suitable location for a treestand. No more. When I show up to hunt this fall, I’ll have more than a dozen locations marked, including the exact tree I want to place my stand in.

Iowa isn’t going to take the title of nation’s toughest place to hang a treestand (that honor goes to Kansas and its ridiculously crooked trees) but it’s close. Iowa has plenty of hardwoods dominated by oaks. But, for whatever reason, those oaks seem to always lean just enough to make hanging a stand a pain. The straightest trees, of course, are often the lovely locust with its trunk covered in needle-like thorns.

The spring scouting session not only affords me the opportunity to find a bunch of potential hunting locations but it gives me the chance to carefully locate the best trees for stands. The woods still look as they will in November because the spring foliage hasn’t started to pop, making tree selection even more productive. Tree locations are saved by dropping a pin on my phone’s Google maps system (or on whatever mapping app I might be using at the time).

Now, when I return to hunt in the fall I’ll be well ahead of the game. I’ll have a good idea of what the ground I’m hunting looks like, I’ll know where terrain features are concentrating deer movement, and I’ll have specific trees marked that I know will accommodate a tree stand.

I may not kill a giant Iowa whitetail next fall. But I do know this: When the time comes to hunt, I’ll be in good shape to make the most of every hour I have.