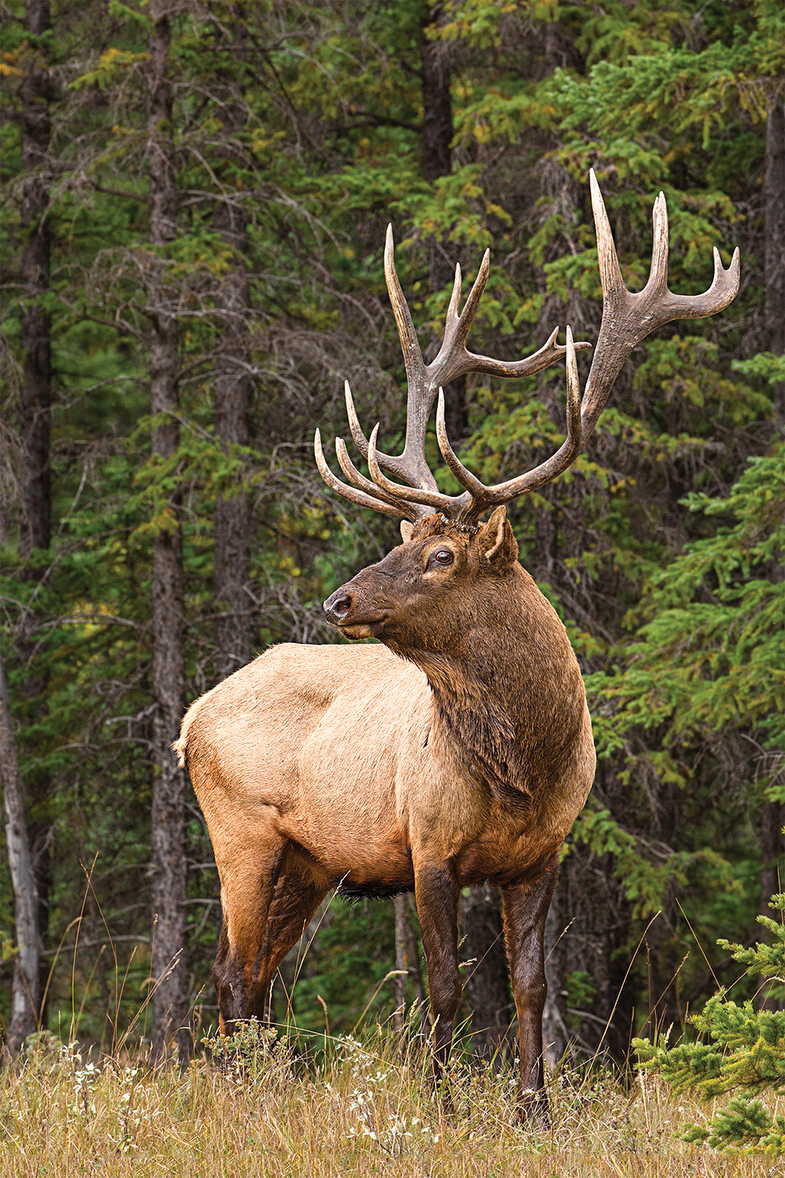 I was mentally measuring my wall for the rack of the lone bull that was picking his way across the sagebrush a mile below me. There was no way he wouldn’t keep walking right toward me, perched at the head of a box canyon.

It was sunrise, and the early October day was forecast to be unseasonably warm. As the elk kept coming, I reviewed what I knew: This was a mature bull, all alone. He was weary from the past month of breeding activity and would be looking for a place to lay up for the day. He was wearing his winter coat and would want shade, visibility, and a breeze in order to stay cool and smell approaching danger.

He was as good as mine, and for an hour he kept coming up my canyon. If there was a problem, it was that I wouldn’t be allowed to shoot him until he crossed a fence 200 yards below me—stepping off private land, where I didn’t have permission, onto National Forest land, where I was waiting. When he got to the fence, he stopped and studied the situation. He looked huge through my riflescope, and I stretched my finger toward the trigger. But he didn’t cross.

Instead, he took a hard right and walked along the wrong side of the barrier, up and over a rise, and out of sight. I never did find that bull. But later that afternoon, I followed his tracks in the dusty ground, and what I discovered has taught me a lot about the behavior of post-rut bulls.

I was correct about most of the factors that influenced that bull’s early-morning behavior. But the one that I failed to consider was that fence. That bull probably knew that public land was dangerous and had learned to avoid it. His tracks followed the private-­land side of the fence for about 500 yards, then he crossed onto my chunk of public land, using a gully for cover. His tracks indicated that he stayed in the trees until he could catch the wind blowing from the head of the canyon where I had been sitting.

Whether he smelled me or simply used the cover to hide his movement, I can’t say, but the minute he crossed the prevailing wind, he went straight away, and his tracks indicated that he broke into a trot. As I tracked the bull, it became clear he was headed for a north-facing slope of timber.

I had seen that area during a scouting trip and knew it was a tangle of blowdowns. But I also knew it held what was in short supply in that part of western Colorado: moisture and shade. My mistake was in not leaving his tracks. If I had followed my hunch and hustled around the timber, I might have intercepted him. As it was, I stayed on his tracks, which got faint before I lost them altogether in dense trees. Since then, I’ve shot other post-rut bulls because I anticipated their destination.

Here are a few tips to help you tag a post-rut bull.

On warm afternoons, bulls will be in the dankest, shadiest holes they can find. In many places around the West, these will be near the wallows that were the focus of rut activity in mid-September.

A classic bedding area for post-rut bulls is the spine of steep ridges. Not the tippy-top, but rather the secondary ridgeline that leads to the crest. These are places that catch plenty of breezes, which both cool and carry the scent of approaching hunters.

Aspen trees have lost their leaves, and most pine trees are too tall to provide shade. Low-slung junipers are often the only hidey-holes a post-rut bull can find. They are especially well used in areas without big expanses of forest.

The moist bases of rock slides, cliffs, and rimrocks are popular spots for solitary elk. The wall provides shade and protection from at least one direction. Bulls will stand periodically and move with the shade.