South to Alberta: The Story of an Alaskan’s First Whitetail Hunt

As I stood against a round bale, watching the last few minutes of legal light of my hunt slip away,... 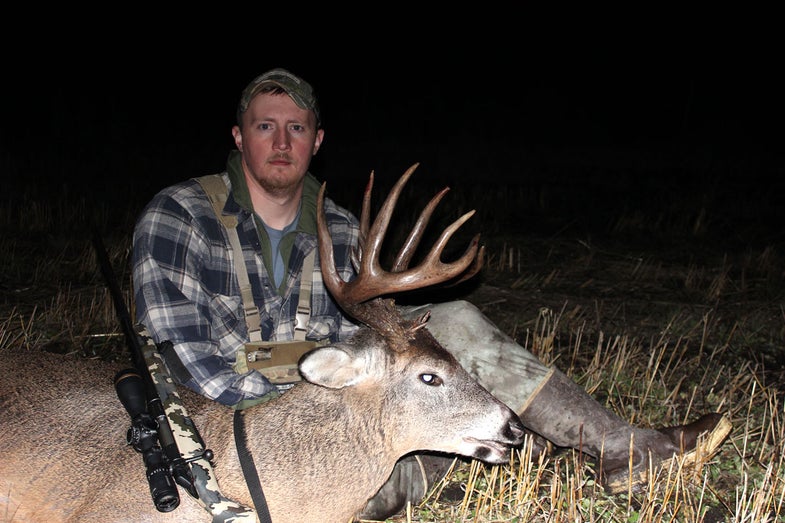 As I stood against a round bale, watching the last few minutes of legal light of my hunt slip away, I thought: “I wouldn’t change a thing.”

My first real hunting trip outside of Alaska was a mixture of things new, familiar, and reminiscent. I headed from my home in Fairbanks to Alberta to hunt moose with Winchester, Leupold, and a handful of other outdoor writers. I’ve spent a lot of seasons moose hunting and frankly, I’m a little spoiled living in Alaska. But, I was very excited to see some new country, and meet some new people.

We arrived at Red Willow Outfitters’ camp at about 2 a.m., and after grabbing a few short hours of sleep, were off on our hunt. Things looked promising immediately. Within 10 minutes, we cut a pair of bull tracks — two bulls had been fighting in the middle of the trail. We were hunting post-rut, but occasionally, bulls will still duke it out. We didn’t waste any time, and started following the bigger of the two tracks. We don’t have many post-rut hunts in Alaska, so this was all new to me. In Alberta, one of the most successful methods that time of year is to get a bull track in the snow, and stay on it. Chances are good you’ll catch up to him. The bulls, tired from the rut, tend to hang pretty tight in the timber. If you’re patient and diligent, you have a good chance at getting a shot.

We followed the bull for half the day, hearing him a couple times, but never getting a look. After calling it on that one, we were making our way down an old cut line through the timber back to the truck, when my guide Jordon pointed to a big spruce tree and said, “There’s a big whitetail scrape.”

There it was, in a forest that looked very similar to what we have here in Alaska, the first whitetail deer scrape I’d ever seen. We continued on our way, and just before the light of our first day disappeared, we stumbled into a cow and small bull. He was only a year-old bull, so he wasn’t legal, but it seemed like a pretty good sign.

That evening at camp, our outfitter showed off a set of 204-inch typical antlers that a local kid had taken a couple weeks before. I was now officially mesmerized. That, combined with a weather forecast that more closely resembled April than November, made me jump at the chance to buy my first whitetail tag. The warm weather and melting snow would make tracking a bull all but impossible. My guide and I quickly reached a consensus that we would have just as good of a chance of catching a big bull out of the timber as we would, finding a big whitetail, so we shifted gears. I found myself in a camp with a bunch of guys that had taken plenty of whitetails, but never a moose, and I had taken plenty of moose, but never a whitetail.

Our game plan changed slightly. With no pre-scouting, we spent our early mornings glassing deer as they made their way out of the cut oat fields, back to the timber to bed, then we spent our afternoons walking cut lines through the timber rattling, while still keeping our eyes peeled for a big bull. I was amazed at the country, it was a mix of Alaska, the farm country I grew up in, and what I imagine the whitetail country of the Midwest to be. The density and variety of game was very impressive as well. We saw elk, moose, mule deer, whitetails, a wolf, tons of coyotes, foxes, as well as black bear, lion, and marten tracks.

On our third morning, we spotted a nice bull at first light, hanging with a cow in a field, just outside the timber. He was a nice Alberta bull, but we figured him at only 40” and I elected to wait for something bigger. After watching him for a few minutes, he and his cow sauntered into the timber, and I was left wondering if I’d made the right call. That evening was a bust for both deer and moose. Normally, I would have been more stressed out, knowing that with the weather, any chance may not come again, but for some reason, I knew it would work out the way it was supposed to.

The following morning, I went with another guide who had seen some nice bucks on his property. I had the chance to shoot 3 different bucks, but knowing I was in country that held giants, I again chose to pass and see what was to come. As my luck would be, while we were out hunting, my previous guide Jordon had been scouting and saw a 170-class buck near where we’d seen the moose the day before.

With some added vigor, we came back that night, posting up next to a round bale to see what would appear. As the day began to cool, and the sun set, we were surrounded by deer. We could see a number of does and a small buck at one end of the field, and more does coming out everywhere. Before long, two bucks began fighting in a corner of the field that was obscured from our view. Just as I asked the time, and Jordon told me that shooting light was over, I saw a dark body pop out in the corner behind us. We knew he was a buck. We had to hold tight till dark to get out of the field without spooking anything, and 10 minutes after shooting light had expired, the big buck walked by us and started scraping 100 yards away. After he made his way in the direction of the two bucks getting after it, we slipped from the field. Now I was starting to understand whitetail hunting.

I had a good feeling, but the next morning, we couldn’t even get into the field because of the number of deer still out feeding. Shortly after lunch, we were set up again, with perfect wind and high hopes. About an hour before dark, we saw does about 800 yards away, in the adjacent field, beyond a tree line. It didn’t take long for a massive buck to appear. Jordon figured the buck in the 175- to 180-class range, which didn’t mean much to me, all I knew was he was a shooter. We couldn’t hunt that field, so all we had was the hope that his does would come over and he would follow. As if it was meant to be, the does started coming our direction. The does as well as a couple smaller bucks came over. Now we just needed the big buck to cross over. We spent the last few minutes of light, again, surrounded by deer, waiting for the big one that never came. A young 8 point stood just 100 yards to our left, bullying 2 smaller bucks. With 1 minute of shooting left, I asked “Should I just shoot that one?” to which Jordan replied “No, he’s too little.” He was right.

I began to severely question my previous passes on the last morning of our hunt. It was going to be the hottest day yet, and a strong wind had all the deer pushed back into the timber well before first light. It was down to the last evening of my hunt. We settled into our position as shadows on a bale again that afternoon just as the wind began to subside.

I sat there just watching the clock tick away, knowing that the last few minutes of light would mean an end to my hunt, but would also hold the best chance for a big buck. As if on a timer, does started appearing with the setting sun. Does came out and began feeding at both ends of the field. As the sky rapidly darkened, we glassed with increased intensity, nothing. I had all but given up.

Just after Jordon told me “10 minutes left,” I swung the glasses over 3 does feeding in the corner of the field where we had been waiting for the big buck the previous night. My heart skipped a beat when behind one of the does, I saw the wide chest of what looked to be a big buck standing just inside the tree line. He came out into the field, and I could see enough antler to know that this was going to be my shooter. Jordon ranged him at 370 yards, saying “You’d better hurry.” A quick twist of the CDS, and a round bale for a steady rest. The Winchester XPR in .300 WSM ripped through the quiet air and put my first whitetail buck on the ground.

He wasn’t the giant we’d seen the night before, but I couldn’t care less. I’ve been fortunate to take a lot of animals, and a last-minute, last-chance opportunity is a trophy in itself. It was my first whitetail, and I could hardly stand to put those antlers down.