Deer of the Year: A Monster from Missouri

After finishing up his chores as a farmer, Joey Baker took to the woods and killed a whopper whitetail. 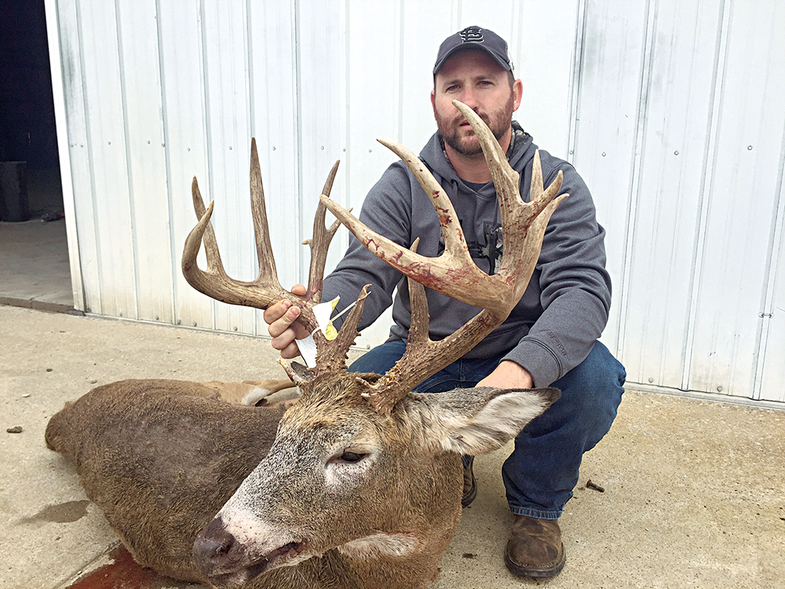 Following the 2014 deer season, some friends asked me to join their group lease. They had previously hunted this ground in northern Missouri, but hoped to add more acreage on an adjoining farm.

We all went up to do a little shed hunting in March, and got fired up when we saw all of the sign from the previous year. We found several sheds, and just loved how the ground laid out. It had it all: food, plenty of cover, CRP, hardwoods, a lot of draws, and water.

We all agreed that this was a whitetail heaven and couldn’t wait to hunt it. While thrashing soybeans last October, I received a trail camera picture of a bruiser buck on my phone. It was an awesome deer. The guys quickly formulated a hunting plan for a weekend hunt and I put the hammer down on my work in order to join the group that weekend.

I got done with the harvest on October 22. The temperature was dropping and a high-pressure front was in the forecast. I packed up that night and headed north. I met the group at 3 p.m., just in time to hit the woods. Everyone in the group already had their spots picked out, but I didn’t have a clue as to where I was going to go. So, I narrowed it down to a couple of stand locations, and decided to play the wind.

I was hunting a field edge bordering a thick bedding area and settled in. Around 4:30, I had an 8-point buck come in about 20 yards broadside, followed by a flock of turkeys. They were at about 50 yards scratching and feeding. To me, I had already had what I’d call a successful hunt. At the right time of year, I think you can drastically improve your odds in the stand by using a deer’s curiosity and aggressiveness to your advantage. I’m big on making noise at this stage in the year. I grunt, rattle, shake limbs, and rake my boots against the bark on the trees. I was just finishing my calling routine when I saw him.

A brute of a buck was coming through the thicket like a dinosaur—swinging his head from left to right and snapping off saplings as he went. He stopped 20 yards from me looking in my direction then started making a scrape. When he was done with his scrape and licking branch directly above it, he began rubbing a tree as big around as my leg. Staying calm was all that I could think about. As hard as I tried to avoid looking at his rack, I couldn’t take my eyes off it. I just kept reminding myself to breathe.

The buck somehow got the feeling that something wasn’t right, whirled, and bolted to about 30 yards away as I tried to get a shot. When he stopped at 45 yards broadside looking straight ahead, I centered my pin and let it fly. Thwack—the noise had never sounded better. He spun around and headed back in the direction he had come, but I heard him crash, and pile up a short distance later.

I knew I had put a good shot on him, but it was 6:15 pm and doubt started to creep in. So, I sat there for another 30 minutes rehashing every detail in my head. Knowing that I had just shot the deer that everyone was chasing, I decided to wait on the group before I took up the blood trail. They came flashlights in hand and I just hung back quietly. Just 45 yards away, they saw a white belly. The closer we got, the more excited I was. They still had no clue that it was him.

Finally, the lights hit his rack. We were all in disbelief. What a monster. A 15-yard drag to the edge of the field and this deer season was off with a bang. What a buck.