“Your treestands should be hung well in advance of hunting season to minimize the disturbance to the area you intend... 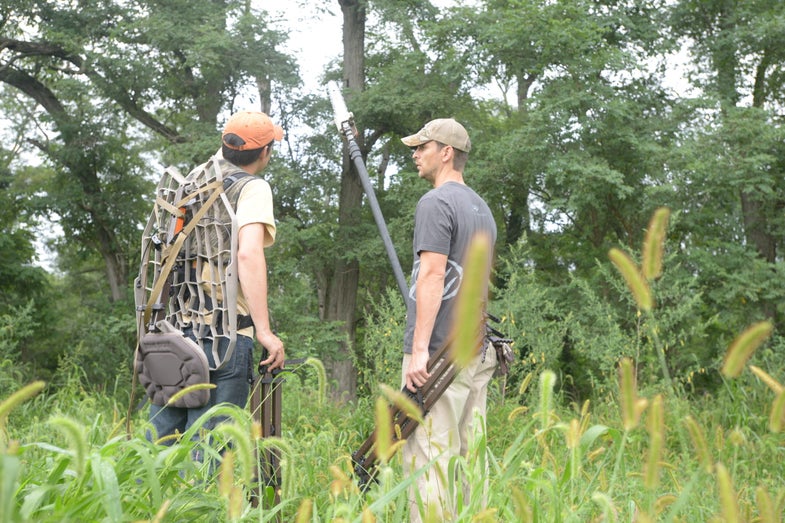 “Your treestands should be hung well in advance of hunting season to minimize the disturbance to the area you intend to hunt.”

There. I’ve done it. I’ve just earned my membership card to the old school outdoor writer’s guild. Thing is, that opening sentence? It’s not at all what I actually do.

Many of the stands I’ll hunt this fall won’t be hung this summer. Some of them are already up, not because I’ve worked that far ahead but because I never took them down at the end of last year. Others won’t be hung until after the season opens.

The vast majority of stands I’ll hunt fall into one of two categories: Time-tested locations where the stands remain in place all year or locations that will be hung just prior to hunting them.

I understand the notion behind the “hang them early” mantra and it does make sense on paper. Thing is, I don’t hunt on paper and I’ve not found a lot of practical use for the advice.

I hunt a fair bit of public land. I hunt private farmlands around home that the owners have given me permission to hunt – and, more often than not, they’ve also allowed several other guys on the ground, too.

This, of course, creates a couple of problems in the early hanging plan.

I don’t know which areas I’ll hunt exactly until I know what food sources are going to be available during the times I can hunt; and I don’t know what the hunting pressure will be until after the season opens.

I’ve hunted the same areas around home here in southern Michigan for quite some time. I have a pretty good idea of how deer will use the ground during the rut and I’ve identified the “best” tree to be in during that time. In those spots, I leave stands in place.

That doesn’t mean the first time I’ll visit that location is the first time I hunt it. That does happen on occasion but it shouldn’t. In those “ever-stands” I’ll coordinate a visit some time in late summer to give the stand an inspection to make sure the squirrels and elements haven’t rendered it unsafe.

For rut stands where your time should be spent watching primary travel corridors near established bedding cover, hanging stands well in advance of the season is a solid strategy. Bedding areas aren’t going to change much because it takes time for the type of cover deer prefer to bed in to develop. It’s not going to happen over the course of a single season. Terrain features that funnel deer movement are also a constant – they aren’t changing much (if at all) from year to year.

But if you’re hanging stands now that you intend to hunt during the first few weeks of deer season in September and October, I think you’re making a mistake.

Much of what you read about placing treestands well in advance of the season will talk about preseason scouting and using those efforts to determine stand locations. That’s good advice but I feel it’s too far-reaching.

In Michigan, for example, bow season opens October 1. That’s just late enough in the year to mean we can have crops in a wide range of readiness levels – some years the beans will green and full of whitetails. Others, those same fields will be mostly picked and the grain resting comfortably in local elevators.

If stands are in place weeks prior, you may well be wasting all of that time and effort. Worse yet, you either have to hunt a stand that’s out of position or you have to go through the process of moving the stand and adding pressure to the deer you’re hunting in the process.

I don’t focus much effort on hunting the first couple of weeks of bow season here to be honest. I personally think the risk outweighs the reward. Heavily hunted deer react quickly to hunting pressure. They can – and will – change locations.

That said, there are definitely times when I will go hard at it early in the season if conditions are right (think cold fronts) and I have trail camera evidence of an older buck on its feet in daylight.

To hunt those situations, I need to have a stand ready that can take advantage of the exact conditions and location where deer activity is currently happening – and you simply can’t place that stand weeks ahead of time. Sure, you may get lucky and have it hung in the right spot. Often, however, you won’t.

To minimize disturbance and reduce the amount of scent and pressure, I’ll haul a stand set in with me, hang it and hunt right then.

I spend the majority of my time afield early in the year simply observing. I’m looking for deer and hunters. I usually find one without the other…

Here’s another point about early season locations – they seldom stay “hot” for long.

Again, food and hunting pressure dictates how, when and where deer (especially mature bucks) will move. Food sources are in near-constant transition throughout the early fall. Hunting pressure builds as the year goes on.

A great stand location that’s focusing on the classic early season bed-to-feed pattern might last a week or so before things change. You can continue to hunt that stand and see an ever-dwindling number of deer or you can adjust.

I prefer to adjust.