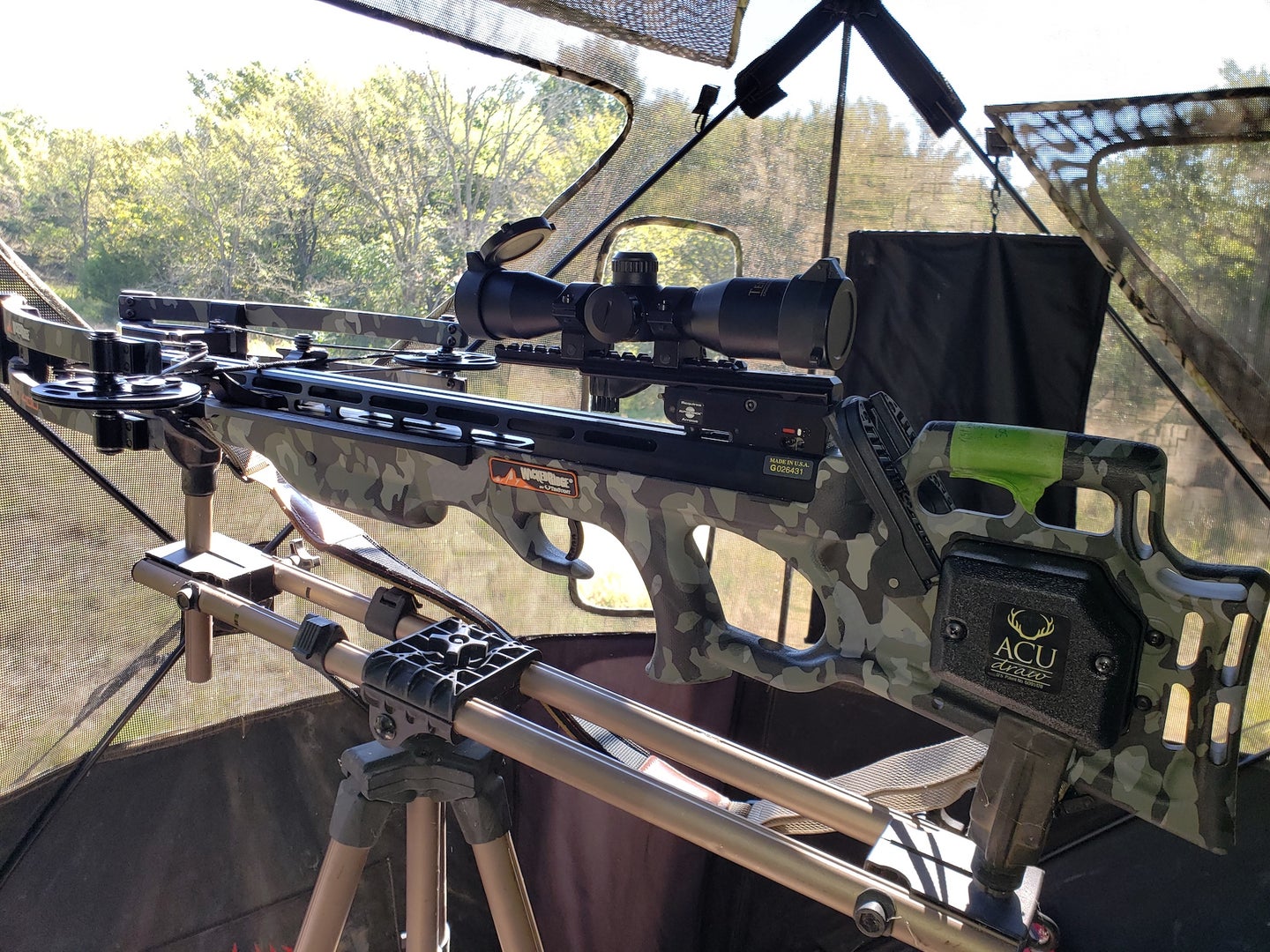 Some hunters demand the best gear available, regardless of cost. Maybe they can easily afford it, or maybe they have to save up. Part of me wishes I was that kind of hunter. But I’ll bet my hard-earned dollar that the majority of us like a bargain. We buy used trucks with low miles so somebody else can take the hit when they drive it off the lot. For me it’s the same with hunting gear, which is why I like the Wicked Ridge NXT 400.

Right now, I view TenPoint as the maker of the most advanced crossbows on the planet. Its Havoc RS440, which features an integrated Garmin optic is the pinnacle of crossbow tech, but it will run you nearly $4,000. I’m about to let you in on a little secret: The Ohio company’s sister brand, Wicked Ridge, basically sells TenPoint models of a couple years ago that have been rebranded and re-priced. They’re still great quality, shoot great, and feature newer technology—just not the newest tech. And they cost $1,000 to $2,000 less. The Wicked Ridge NXT 400 is one such model. A few years ago, a strikingly similar crossbow called the TenPoint NXT Stealth was sold for about $1,600.

At the core of the Wicked Ridge NXT 400 is an eccentric system the company calls Vector Quad. Four cables, rather than two, are anchored by the machined aluminum riser, then wrap around a steel fulcrum pinned to the barrel before attaching to the top and bottom of both cams. It sounds complicated, but what it does is simple: It pulls the limbs drastically inward toward the barrel to load them—making the bow as narrow as possible when cocked—while simultaneously mitigating the chance of cam lean because of equal pressure above and below each cam. This ensures consistent nock travel for enhanced accuracy potential.

The width—which is the most critical measurement of a crossbow, because wide bows are very gangly to hunt with—is 6 inches axle-to-axle when cocked, or, more importantly, 9 inches at its greatest overall width. This puts in the top five narrowest crossbows available, and likely the narrowest at its price point.

The NXT 400 is touted to deliver a 22-inch bolt at 400 fps, and my chronograph confirmed it. The 450-grain bolt (including a 100-grain broadhead) delivered 159 ft.-lbs. of kinetic energy. I chronographed it with the 100-grain broadhead just to confirm Wicked Ridge’s claims, but I suggest shooting a 125-grain broadhead, or better yet, a 150-grain broadhead for five reasons: It quiets the bow. There’s less string vibration and string speed, which increases string and limb life. Heavier heads are often more accurate. Penetration is increased significantly. Finally, heavier heads are built more robustly, and therefore have a better chance of resisting damage and performing ideally upon impact.

The NXT 400 features an aluminum barrel that’s supported by a molded polymer frame. Its fire control system is wholly TenPoint, featuring a brush-style arrow holder, a reversible-ambidextrous safety, and an anti-dryfire system that I actually tested when I accidentally dry-fired the bow; It saved my backside.

Most significantly, the Wicked Ridge NXT 400 contains a world-class crossbow trigger. It breaks cleanly at 3.1 pounds—something that would have been a pipe dream only a few years ago. Such a great trigger is a huge boon to accuracy, because a rock-solid followthrough is so vitally important on a crossbow.

The draw systems are probably where you’ll find the most disparity between the flagship TenPoint crossbows and the Wicked Ridge models. Ten Point’s Havoc RS features a sled-style cocking system that can be used to cock or decock the bow. The NXT 400, however, has the ACU draw system that was on most TenPoint crossbows several years ago. It is sufficient and indeed easy to use—a huge improvement over bows from 5 years ago—but it’s not the newest draw-tech available. To use it, simply remove the barrel guide from its holder, push the lever to pull it over the scope, and attach it to the string. Then insert the cocking handle into the crankshaft and crank. It only requires about 12 pounds of force, so anyone—from kids to grandmas—can cock and therefore shoot this bow. A handy crank handle holder is molded into the buttstock, which makes this crucial item hard to lose.

To test the NXT 400 I set out to answer the key questions a hunter wants to know when buying a new crossbow: How fast is it? How much does it weigh? Is it loud? How accurate is the crossbow?

I started the testing by checking the speed. The NXT 400 shot a consistent 400 fps with a 450-grain bolt, according to my state-of-the art Lab Radar Doppler chronograph.

Fully rigged and ready to shoot with scope and ACUdraw, the NXT 400 weighed a little more than what it says on the spec sheet—a little over 9 pounds. It’s fairly long at 33 inches without its unnecessary stirrup, but it’s very narrow, which is the key dimension.

To determine how loud the crossbow shoots, I used a decibel meter. It registered 106 on my decibel meter, which puts it in the middle sound range of crossbows I’ve tested. Over the years I’ve tested dozens of crossbows for quietness by placing an inexpensive decibel meter six inches under the tip of the cocked arrow. While the reading may not be 100 percent accurate in terms of decibels, it’s useful for comparing crossbow loudness. Generally, the faster crossbows are, the louder they are—and the NXT is fast.

While shooting from a Caldwell Lead Sled, I recorded 1.9-inch groups on a windy day at 30 yards with 100-grain field points. I shot it again with less wind and 150-grain heads, and recorded 1.5-inch groups. This translates to 3 inches at 60 yards (assuming conditions are similar) with enough energy left to easily zip through a whitetail.

What the Wicked Ridge NXT 400 Does Best

One thing I’ve always noticed about TenPoint crossbows is something that is difficult to quantify in testing, but easy to feel as you shoot one: The overall quality of build. Both TenPoint and Wicked Ridge crossbows are well made. They feel solid, don’t rattle, and hold up through copious shooting and abuse during regular crossbow hunting. It’s evident that American workers took pride in building this bow. Out of the box, the Wicked Ridge NXT 400 shot very close to the bullseye at 20 yards when I installed the scope. This suggests that someone took the time to zero and test it before it was shipped. And I love how narrow and easy to carry this bow is.

What the Wicked Ridge NXT 400 Does Worst

The NXT 400 is not the worst in any performance category, but if it has a weakness, it’s probably in its accuracy and noise level. Its accuracy and noise are sufficient, but middle of the pack compared to crossbows costing as much or more. Secondly, like most crossbows that come with a scope, the scope is low quality with poor anti-reflection coatings and janky finger adjustments that are sometimes hard to turn. Owners should consider upgrading the scope to a higher-quality model.

If you’re looking for the best hunting crossbow for the money right now—maybe not the one with every latest technology, but one that will enable you to kill deer for seasons on end, and save you some cash in the process—I strongly recommend Wicked Ridge’s NXT 400.