The 2022 Elite EnVision is built with accuracy, not speed, in mind 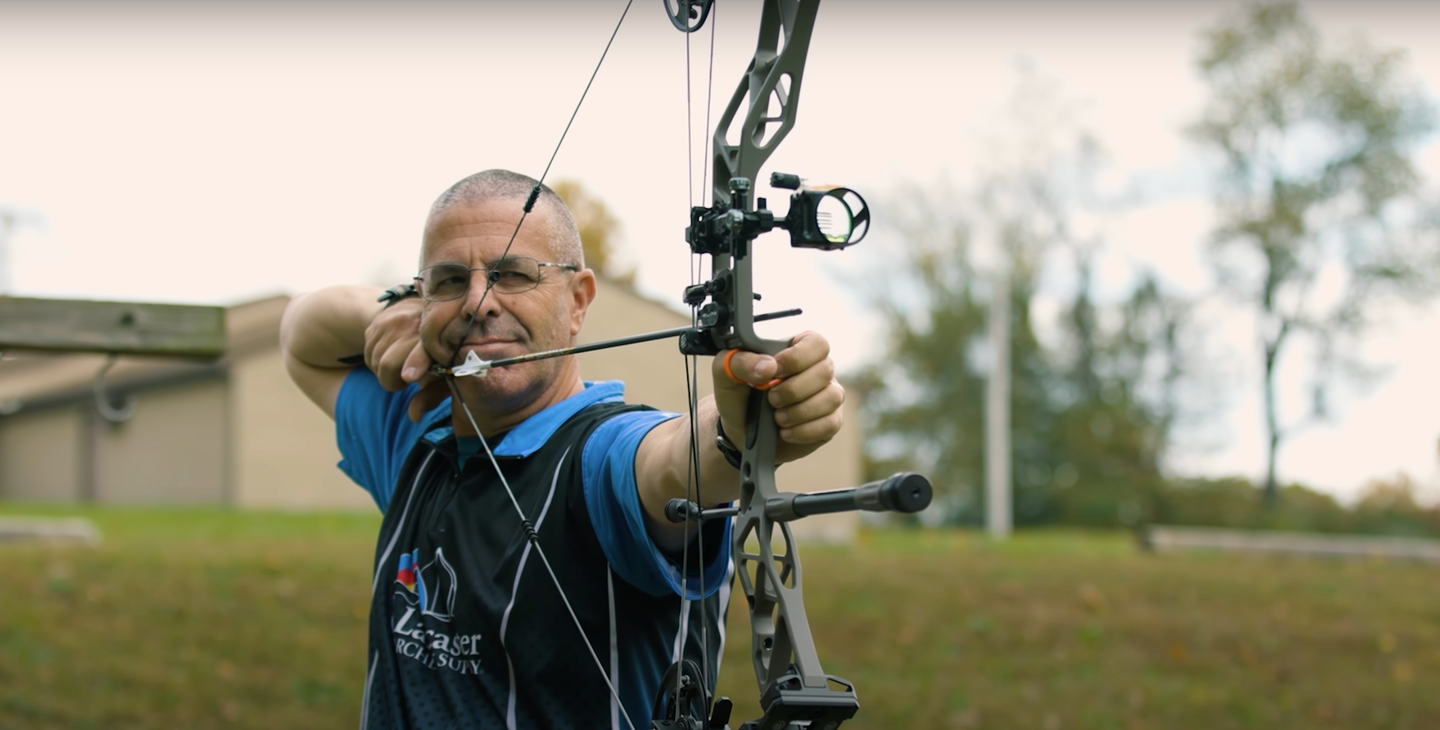 Elite’s new EnVision 2022 flagship compound bow has so many so many customizable features that it can accommodate almost any shooting style. Once you do get the Elite EnVision set up, you’ll experience a forgiving, smooth-shooting, tack-driving hunting bow—qualities that Elite has become known for through the years.

The EnVision measures 31 inches axle to axle, with a 6.9-inch brace height and an adjustable module that allows for a draw length range from 23.5 to 30.5 inches. If you’re going to offer just one version of a flagship hunting bow, a 31-inch bow is probably the sweet spot. It’s not too short, and it’s not too long. It’s right in the middle, so it should have a fairly wide appeal.

The adjustable module on the Elite EnVision is unique among compound bows on the market. Besides other Elites, it’s the only one I’m aware of that allows for quarter-inch draw length adjustments. That’s a useful feature that allows an archer to dial in their best draw length.

Most rotating modules on compound bows adjust in half-inch increments. For many bowhunters, they’ll work with the half-inch length that is closest to perfect for them. But there are plenty of others who like to dial in their draw length even more to get it absolutely where they want it.

On most bows, to make adjustments in between the half-inch increments, you can twist the cables, which shortens those cables and increases draw length incrementally. But that twisting also increases draw weight and changes cam timing. Believe it or not, to move your draw length just a quarter-inch by twisting cables can take several twists. Like six to eight. And as the Elite engineers will tell you, they design the bows to perform their best with the cables at the length they come from the factory. Once you start twisting to adjust the draw length, you’re changing the performance of the bow.

Designed for Accuracy, Not Speed

A basically 7-inch brace height on a hunting bow? That’s almost unheard of today for flagship hunting bows. Six to 6.5 inches is way more common, since that’s one of the ways compound bows boost speed. The shorter the brace, the faster the bow.

Brace heights of 7 inches and higher are more commonly found on compound bows intended for target shooting, since they tend to be more forgiving. By that, I mean they don’t magnify errors in shooting form as much as bows with shorter braces.

With a 6.9-inch brace height, the EnVision kind of offers the best of both worlds. It’s a forgiving bow that shoots relatively fast. It’s got an IBO speed rating of 334 feet per second. (I’ll give you a real-world speed test here shortly.)

Where some bows are built purely for speed, the EnVision is built for accuracy—with a fair amount of speed. And the accuracy isn’t solely realized through that brace height.

In building the EnVision, Elite lengthened the riser, made it straighter—less reflex—and shortened the limbs, and widened the limb pocket. All of these features add up to produce a bow designed to aim well, balance better and shoot without vibration.

In keeping with the ability to envision how you want this bow to shoot, Elite includes limb stops in the bow box. The archer can choose whether to install them and have a brick-solid back wall at full draw, or leave them off and rely on the cable stops on the cams to provide a more elastic back wall. The latter is often preferred by people shooting a hinge or tension release that functions best with continuous pulling to get the release to fire.

To further customize the back wall, archers can adjust the bow’s let-off from 70 to 90 percent simply by moving the position of the draw stop. Go with 90 percent if you like to hold minimal weight for a long period, but go with 70 percent if you like the feeling of the bow pulling on you when you’re at full draw. Modify those extremes to get the feel you like by adjusting the let-off somewhere in between.

Incorporated into the Elite EnVision is arguably the best DIY tuning system in the compound world—S.E.T. (which stands for Simplified Exact Tuning). Elite’s S.E.T. system allows the user to pivot the limb pocket left or right simply by turning an Allen key.

According to Elite’s head engineer, Josh Sidebottom, pivoting the pocket adjusts the load on each limb, which adjusts the cam position at full draw. As you’re paper tuning, you can remove left and right tears by pivoting that limb pocket. And Elite even tells you right on the bow which way to turn the Allen key to remove left or right tears.

I don’t know how they could have made S.E.T. any simpler or more user friendly. You don’t need a bow press. You don’t even need to leave the shooting line to make adjustments. You don’t need to be a seasoned bow technician. Observe the paper tear, turn the Allen key the appropriate direction and shoot again. Repeat until the tear goes away.

For my test, I borrowed an Elite EnVision from an executive at Lancaster Archery Supply, who hunted with the bow with some Elite officials in early November. The bow was set with a 29.5-inch draw length and a 70-pound draw weight.

Unfortunately, I didn’t have access to a chronograph when I tested that bow, so I didn’t do a speed test. Instead, I later borrowed another EnVision from Lancaster Archery’s pro shop that was set with a draw length of 29 inches and a draw weight of 70 pounds. That bow fired a 433-grain arrow at 273 feet per second.

That’s not great arrow speed, but it’s not terrible. I’d characterize it to be on the slower side of average for flagship hunting bows, like the PSE Carbon Levitate. But when you consider the nearly 7-inch brace height, 273 fps is decent. And I don’t care much about arrow speed anyway. If the bow is nice to shoot and it can drive tacks, I’ll deal with whatever speed it produces.

And the shooting experience is where the EnVision excels. For years, Elite has talked about the “shootability” of their bows. The EnVision fits right in with its predecessors.

The draw cycle is super smooth. My 70-pound bow drew much lighter. I would have guessed it was set at 65 pounds.

The cam rollover is like butter, so the transition into the valley isn’t harsh. And then once you’re into that valley, you can stay all day. In fact, when I went to let down the EnVision—set at 90-percent let off—rather than shoot it, it felt like I had to push forward with my string hand to get the cams to roll back to the resting position.

I had the limb stops on my test bow, which I like. It creates a super-solid back wall that I could pull into with my wrist-strap, index-finger release. I could pull as hard or as light as I wanted to keep the stops against the limb pads.

The Elite EnVision’s riser makes up about 90 percent of the bow’s axle-to-axle length. This is a trend we’re seeing now from several bow manufacturers, and it’s one I like. The longer riser makes this bow hold incredibly still at full draw. Target bows aren’t 40 inches long just for kicks. The bigger bows hold better.

That steady aim is more what I look for in a bow than arrow speed. If I can hold the bow steady and know the distance, I can hit what I’m aiming at—regardless of arrow speed. I could hold the EnVision steady, and my groupings at 50 yards were baseball-sized. That’s pretty good for a bow test.

Adding to the shootability of the EnVision is the nearly total lack of hand shock. I felt next to nothing when I released the string, and the bow didn’t jump at the shot.

Why is hand shock a big deal? I mean, who cares what the bow does by the time hand shock hits you? The arrow is already gone.

True, but hand shock can be distracting. My follow-through is much cleaner when there is not a lot of vibration. A clean follow-through is a critical part of the shot. You don’t want to twitch at the release because you’re anticipating recoil. That can open your arrow groups.

And for many bow sales, hand shock simply is a big turn-off. In many pro shops, people buying new bows shoot them without a sight, at a target placed 5 yards in front of them. So, the only features of a bow they’re really testing are draw cycle and hand shock. If one bow thumps and another doesn’t, the buyer probably will choose the one that doesn’t.

The grip on the EnVision is one of the finest on the market. It has been fine-tuned over the years with input from some of the best target archers on the planet—Chance Beaubouef, Nathan Brooks, Darrin Christneberry, to name a few. These guys want a grip that enables them to repeat their hand position with precision accuracy shot after shot after shot. That’s the grip built into the EnVision—narrow at the top, flat on the back, angled to promote just the right amount of bend in the wrist.

Turns out I didn’t need S.E.T. for the bow I was shooting. Simple rest adjustments enabled me to produce a bullet hole for paper tuning. But it’s nice to know that system is there on the EnVision. If I changed arrows, I might need it. And I already know it’s a snap to use.

Where the EnVision Is Lacking

Arrow speed. Yes, the bow shoots exceptionally well, but there are bows that shoot really well and are a fair amount faster, like the PSE Carbon Levitate, than the Elite EnVision. More arrow speed is nice when shooting at distance and when you don’t have time to range a target. When you have to judge target distance on your own, faster arrow speed gives you more room for error.

What the EnVision Does Well

Draws, aims, shoots. Taking arrow speed out of the equation, this bow is a shooter. When I knew the distance, I put arrows where I wanted them with ease. The nearly-7-inch brace height masked shot to shot flaws in my form, and kept my arrows in the bull’s-eye.

In my opinion, S.E.T. is the finest tuning system on the market. It’s easy to use. Anyone can use it. And it works. That’s a winning combination.

The Elite EnVision is built for customizable, precision accuracy. With all the adjustments you can make to this bow to suit your preferences, it’s about as close to a chameleon as we have in the archery world. Envision what you want the bow to do, and then make the changes needed to achieve that goal.