Battle of the Fastest Crossbows: Ravin R500 vs. Tenpoint Nitro 505 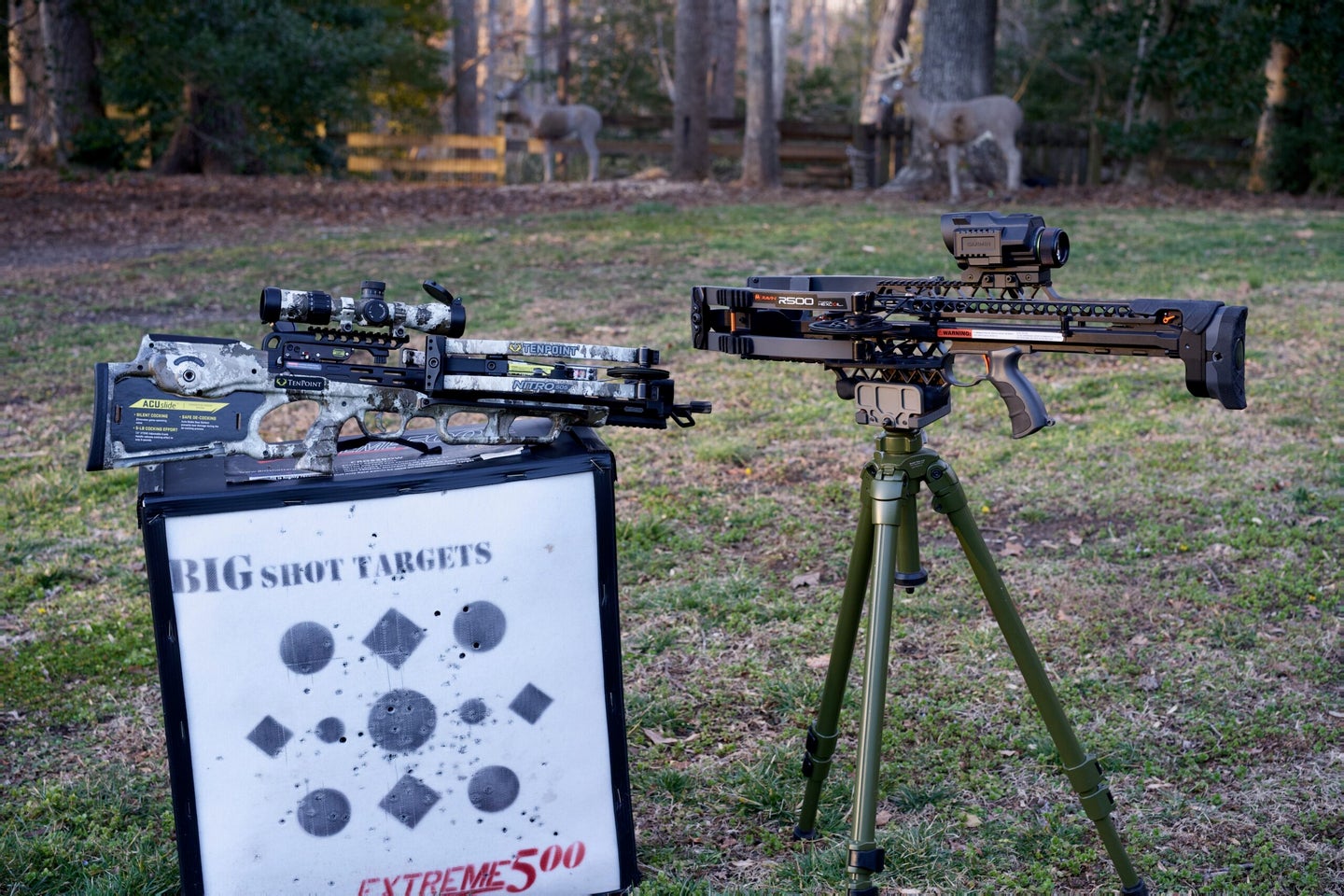 The crossbow arms race has two main players: TenPoint and Ravin. Both manufacturers make the fastest crossbows in the world with advertised speeds at and above 500 fps.

That speed is absolutely incredible for something that shoots an arrow. Especially when you consider that as recently as 2019, the fastest crossbows were just breaking 400 fps. The fastest we tested that year was a 430 fps TenPoint. Three short years later, we’re talking about two 500 fps crossbows. With two options, the natural question now becomes: Which 500 fps crossbow is better?  We took the Ravin R500 and Tenpoint Nitro 505 and tested them head-to-head for accuracy, speed, and ease of use. Here are the results.

Do these two bows really shoot faster than 500 fps? Yep. Using a LabRadar Doppler chronograph, we clocked the Nitro 505 at 515 fps and the R500 at 502 fps. Speeds are based on a five-shot average and both crossbows used 400-grain bolts. The Nitro 505 also can shoot 450-grain CenterPunch bolts, which bring the speed down to 488.5 fps.

The Doppler radar chronograph tracks projectiles downrange and provides speeds at various distances. At 50 yards, the R500’s bolt is moving at 462 fps and carries 191 ft-lb KE with .827 slug fps of momentum. At 50 yards, the Nitro 505’s Pro Elite 400 bolts are moving at 474 fps, and have 201.5 ft-lb KE, and .85 slug fps of momentum. For perspective, these crossbows produce more energy and momentum at 50 yards than a compound bow does shooting a 600-grain arrow, 300 fps at point-blank range. As you can see, neither of these crossbows are lacking terminal performance at distance.

Plus, speed can help you make a well-placed shot because if you’re shooting anything inside of 40 yards, there’s no need to range the target. We found that out when we shot two bolts at 20 yards and two bolts at 40 yards with no elevation adjustment. The R500’s 40-yard group was 1.5 inches below the 20-yard group, and the Nitro 505’s was 1 inch lower at 40 yards.

We shot six, three-bolt groups at 50 yards from a bench with a lead sled for our accuracy testing. The R500 averaged a 2.7-inch group, and the TenPoint averaged a 3.08-inch group. You can buy a more accurate crossbow, but both produced acceptable field point accuracy. Broadheads were another story.

For broadhead testing, we used the SEVR 100-grain and 150-grain broadheads. They were also fired from a shooting bench and lead sled with the target at 50 yards.

The Nitro 505 with the TenPoint Pro Elite bolts produced inconsistent broadhead accuracy. We found some bolts had a 9-inch difference in field point to broadhead point of impact. Other bolts with the same broadhead grouped with the field points and those groups were 2.75 to 3.5 inches. If you choose a Nitro 505, we recommend buying a dozen bolts, numbering each one, and shooting each with broadheads to weed out flyers. We also tested the heavier CenterPunch bolts to see if their slower velocity would improve accuracy, but got the same results.

We had better luck shooting broadheads from the Ravin. My first two shots of broadhead testing–one broadhead and one field point—were near Robinhood with both bolts touching. We shot multiple groups with a 100-grain SEVR crossbow broadhead at 50 yards, and it consistently grouped with field points. We also swapped the broadhead onto different bolts and found only one flyer that shot 4 inches outside the group. We ran the same test with the 150-grain SEVR broadhead, and it neither hurt nor improved broadhead accuracy.

While these crossbows can shoot high speeds, other components like bolts, fletching, and broadheads aren’t yet able to maximize that performance. We wouldn’t be surprised to see innovations from Ravin and TenPoint in these areas next year.

The Nitro 505 is easier to cock and load than the R500. Cranking it takes minimal effort and is aided by the well-designed crank handle. The R500 has a cheap and uncomfortable crank handle. It also takes more effort to crank, and you have to snap the nock onto the string, which requires gripping the bolt near the tip. It’s a sketchy step with a broadhead.

But the cocking mechanism on the R500 is far more innovative. The trigger group moves on threaded rails for a clean design with no straps or ropes. The Nitro 505 is a more familiar design that uses straps. We had an issue with the first TenPoint we tested when the strap became disconnected from the internal cranking mechanism. Nothing dangerous happened when the strap broke; it simply wouldn’t cock the crossbow. The second crossbow TenPoint submitted for testing worked flawlessly.

Another cool feature of the R500 is the shroud that encloses the string. It’s a smart way to add an additional level of safety to a powerful crossbow. The Nitro 505 uses the standard finger shield to keep your fingers below the string. In this category, it’s a draw. The Nitro 505 requires less effort to crank, is easier to load, and has a much nicer crank handle. The R500 has a more innovative design, and it didn’t have any failures while testing.

Uncocking both crossbows is a simple process: Unload the crossbow, insert the handle, and reverse crank. The nice thing is you can let go of the handles without fear of them unwinding out of control. The biggest difference between the two is that on the Nitro 505 you have to press the release tab to start the uncocking process and the R500 you just uncrank. You can leave the trigger mechanism attached to the string on both crossbows without damage, but only the Nitro 505 allows you to disengage it from the string. Read the instruction manuals for full instructions.

We’ve sidestepped discussing price because both of these bows are wildly expensive. The R500 and the Nitro 505 start around $3,000, and some accessory packages exceed $4,000.

There’s a silver lining if you’re not interested in dropping $3,000 or more on a crossbow, the technology that makes these crossbows possible will eventually make its way into less expensive bows. For example, during the 2022 Outdoor Life Crossbow Test (read our full review of the best crossbows here), we shot several crossbows under $1,000 that clocked in over 400 fps, which was peak performance a few years ago. Maybe we’ll see a budget 500 fps crossbow at the 2025 crossbow test.