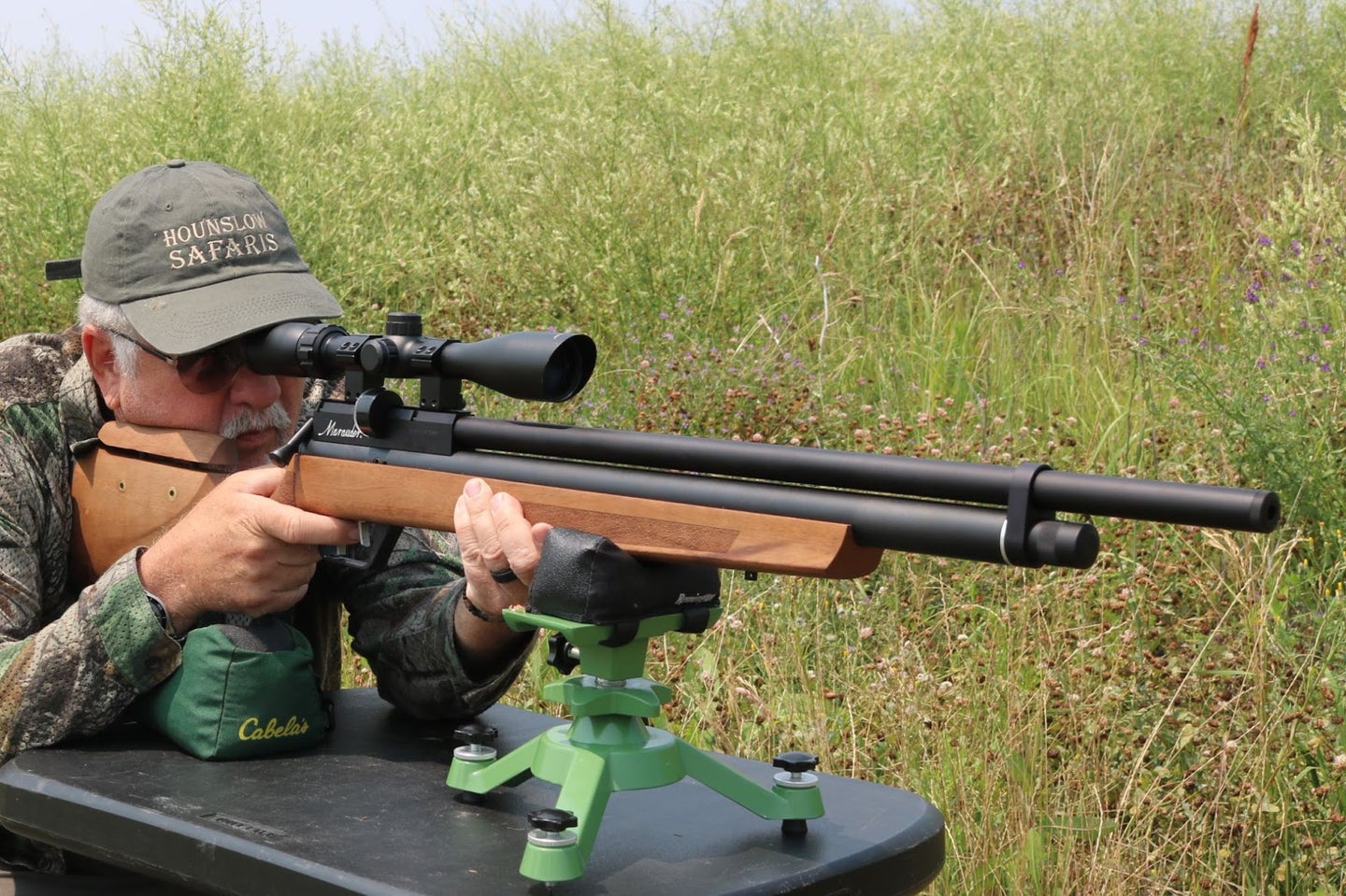 I started shooting adult oriented spring-piston air rifles while living overseas, and just before returning home, I was introduced to the new precharged pneumatic (PCP) airguns. My first PCP rifles were from Britain and were beautifully made and extremely accurate. However, the expense of imported airguns presented a barrier to entry for many US shooters. At that time, for the cost of a PCP air rifle, the American shooter could buy a couple .22 rimfire rifles and a few bricks of ammo (those were the days). Combined with a general lack of awareness within the domestic shooting community, this dampened the initial growth of the PCP airgun market. If only an airgun like the Benjamin Marauder air rifle existed then.

Before we discuss why the Benjamin Marauder is so effective, let’s review how it came to be. When Crosman (the parent company of Benjamin) threw their hat in the PCP air rifle ring with the Discovery, I was given the opportunity to do some preliminary testing. They quickly improved on the initial design and a few months after the introduction of the Discovery, I was contacted by Crosman to evaluate their follow-up to the Discovery. This prototype air rifle had a multi-shot magazine, was fully shrouded, had a two-stage adjustable trigger, was more powerful, provided a high shot count, and would be available in several calibers. This new gun was to be called the Marauder, and the design was feature-rich, offered excellent performance, and was priced right for the US market.

The Marauder ticked the boxes for what I want in a hunting rifle, then and now, and I’ve used this gun a lot over the years. I’ve hunted with it across the US, and I’ve carried the Marauder as my small game gun on multiple trips to South Africa. To make this great air gun even better, Crossman has continued to improve the Benjamin Marauder platform.

The Marauder is a large frame air rifle, but it is well balanced with a hardwood stock that has an adjustable and ambidextrous raised comb, a nicely shaped pistol grip, and machine cut checkering on the grip and forestock. The result is a rifle with excellent ergonomics that provide a stable shooting platform.

The standard Benjamin Marauder package comes in .177, .22, and .25 caliber. You can also choose from two stock options, either the hardwood stock described above, or a synthetic stock which aside from weight (about ½ lb lighter), has the same dimensions and design elements. The Marauder is cycled with a bolt action positioned at the rear of the receiver. The bolt can be set up for either a left or right hand shooter. The cocking action is short and smooth, and when cycled it auto-indexes the rotary magazine. It is easy to cock the rifle without coming off the shoulder, allowing quick follow-up shots. The .25 caliber rifle has an eight-shot capacity, is easy to load, and is a proven design.

The two-stage adjustable trigger is set up at about 3 pounds from the factory. The trigger is crisp with a positive let-off and negligible overtravel. Trigger adjustments are achieved using a set screw for trigger pull weight, trigger blade position, and changes to the first and second stages. The safety is positioned directly in front of the trigger and is easily accessible without a lot of extraneous hand movement. The Marauder utilizes a rifled barrel with a choked muzzle, producing excellent accuracy. It is equipped with an integrated barrel shroud resulting in a very quiet airgun! It’s the quietest air rifle I’ve heard in its power class. If the main reason you are buying an air rifle is backyard target practice or small game hunting in a noise-sensitive environment, this gun should be on your radar.

Onboard air storage is provided with an under-barrel cylinder with a 215 cc capacity and a pressure rating of 3000 psi. The cylinder is filled from an external source using a standard quick fill connector. A pressure gauge is mounted a couple inches in front of the trigger guard and allows air pressure to be monitored as the gun is shot.

For this review, I took a stock Benjamin air rifle to the range and put it through its paces. Specifically, my objectives were to run shot strings over the chronograph, shoot 45-yard groups, and try out a few different pellets. The Marauder’s onboard adjustments allow the preferred balance between power, consistency, and shot count.

How powerful is the Benjamin Marauder? At the factory presets the rifle generated 27 shots with a peak velocity of 835 fps, a low of 680 fps, and an average of 787 fps. If we look at the first 15 shots, the average velocity is 822 fps with a 25.39-grain pellet or a calculated muzzle energy of 38 foot pounds. From an airgun perspective, this is a respectable energy output, but as mentioned, the gun can be optimized depending on the shooter’s requirements.

Accuracy at 45 yards was very good, the best results being obtained with JSB Exact 25.39 grain round nose pellets. Ten shot groups could consistently be covered with a quarter, and I think it is fair to say that this is solid performance in a small game gun. When shooting groups at 10 yard increments between 30-75 yards, I was able to keep two shots almost on top of one another until reaching 75 yards where they opened up but still remained within the kill zone of a rabbit.

Though baseline performance is good, it is possible to further improve power, accuracy, and air management by adjusting the hammer (tension and stroke) and optimizing the airflow through the transfer port for a specific pellet. These adjustments are a parallel to handloading in the firearms world. However, I would suggest you read up on this and buy a chronograph before you start tweaking the rifle.

In my range session, I shot four different pellets, the JSB Exacts, the Benjamin Discovery, the H&N Baracuda, and the JSB Hades. The JSB Exacts gave the best results, and an occasional flyer occurred with the H&N’s, but all of these pellets would be good for small game hunting. Even the best air rifles can have pellet preferences, so to get the best possible results, the shooter needs to try different projectiles.

Where the Marauder Shines

I find the Benjamin Marauder to be an excellent hunting air rifle. It carries well, comes quickly to the shoulder, points naturally, and allows a consistent and comfortable sight alignment. As mentioned, my preference is the .25 caliber which hits small game like a sledgehammer. I have complete confidence with this rifle at 50 yards and have frequently reached out farther when shooting prairie dogs from a rested position. The bolt action and magazine cycles smoothly and reliably, which enables fast follow-up shots when needed. I can be rough on my guns and gear in the field. This rifle has stood up to the hard knocks and always performed for me.

Where Is the Benjamin Marauder Lacking?

Of course, very few things in this world are perfect, and as good as the Marauder is there are places it could be improved. First, even though the rifle is not oppressively heavy, it is pretty stout, hitting 10 to 11 pounds with a scope. The rifle does not have a mechanism to prevent double loading a pellet. It is possible to cock the rifle in the heat of the moment, only to realize the gun already had a pellet loaded and a second pellet has been jammed in behind it. This is not a huge problem but can require some time and effort to correct.

And finally, the Marauder is not regulated, so shot-to-shot consistency is good but not great. The solution is to find a setting where there is a balance between shot count, power, and accuracy. This allows consistency to be optimized for all but the most precision oriented competitive applications. There are also after market regulators for those that want to follow this path with their Marauder.

Tip: How to Fill a PCP Air Rifle

There are several options available to supply your Marauder with air: the least expensive (by far) is a 3 stage hand pump, but eat your Wheaties before using this bad boy. It resembles a bicycle pump on steroids, and you’ll have to put your back into a couple hundred pumps to charge the gun from empty. The next option is a high pressure air tank, but you will need an air source such as a paintball or dive shop. My favorite option is an air compressor. The good news for airgunners is that the price of personal compressors is becoming quite affordable. Crosman offers a full size compressor and a travel compressor, which makes filling your rifles fast and easy.

Final Thoughts on the Marauder

I really liked the Benjamin Marauder from the first time I shot it. As stated, it is a larger gun, but I find that it balances on the shoulder and fits me well. With the adjustable stock, I think most shooters will be able to configure the rifle to fit them. The performance is solid, with excellent accuracy and power. The Marauder, especially the .25 caliber, will do the job on any small game you want to pursue. The fact that you can adjust the power, and the gun is so inherently quiet, means it can be used in noise-sensitive shooting and hunting scenarios. In my experience, the rifle and the magazines are rugged and reliable. And finally, the breadth of aftermarket components and the number of possible modifications makes this a great platform for a wide range of applications and shooting disciplines. I do think that if you are looking for a mid-priced hunting rifle, the Marauder deserves a spot on your shortlist.