The Curado DC uses a microcomputer to cast farther and reduce backlashes. 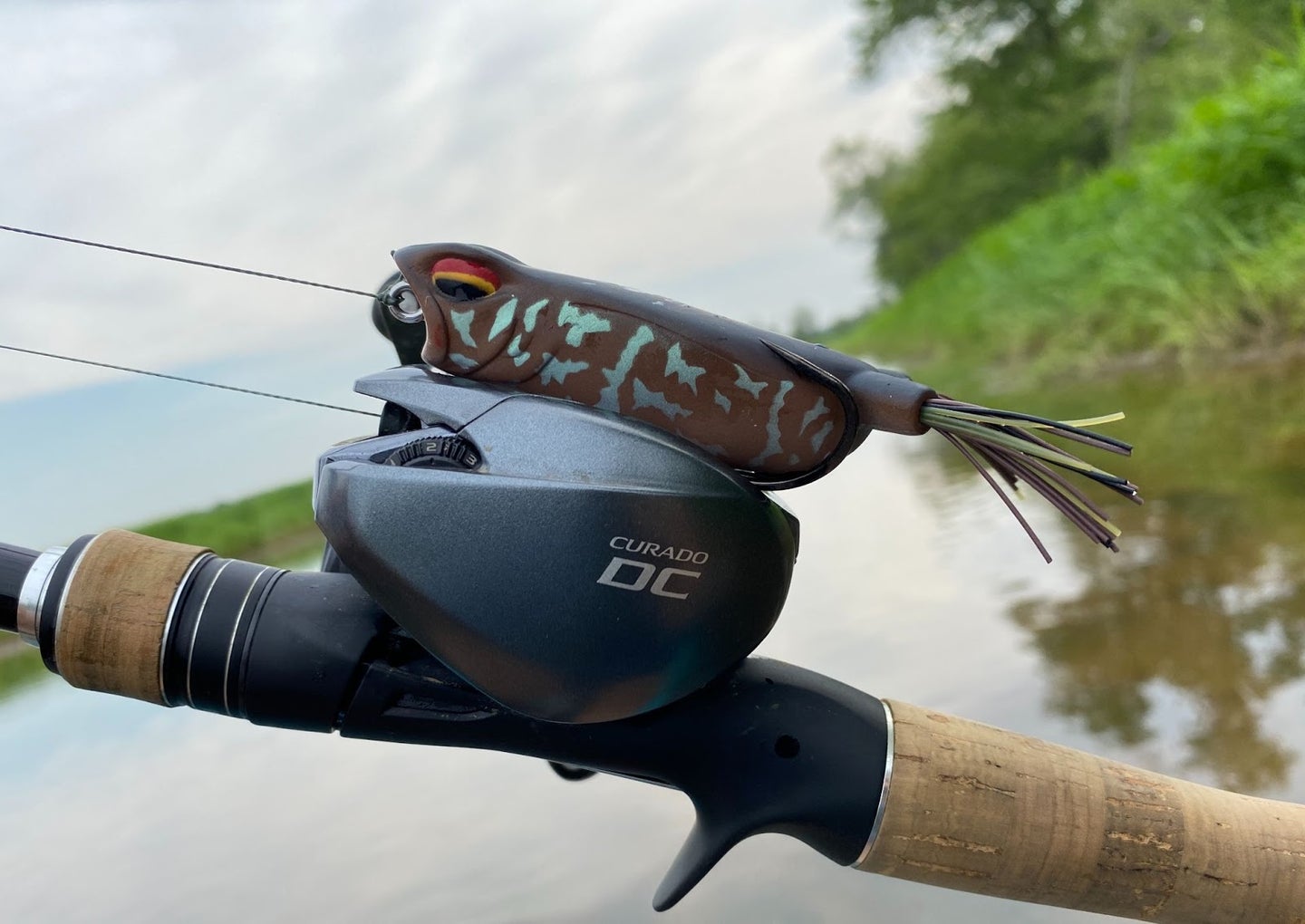 The best fishing gear salesperson isn’t the associate at your local fishing store or an ad on TV. It’s a friend that outfishes you with superior gear. Last summer, I was frog fishing with a buddy who was using a Shimano SLX DC. He could cast twice as far as I could with my Daiwa Tatula and handedly outfished me. To make matters worse, each cast he sent into orbit announced itself with the unmistakable and oddly satisfying signature sound of the DC reels.

Seeing the capability of that fishing reel stuck with me, and when I set out to buy my ultimate frogging setup, a Shimano Curado DC ended up in my cart. While testing this Shimano reel I found it to provide much longer casts and fewer backlashes, which made it easier to catch more fish and have fun doing it.

The Shimano Curado DC comes in several models to match your desired gear ratio and line capacity. For my frogging setup I went for the 150 XG with an 8:5:1 gear ratio. The fast retrieval speed allows me to quickly pick up slack before driving the hook home and burn a frog in when it’s outside the strike zone. The reel weighs 7.9 ounces and perfectly balances my 7-foot-3 Shimano Expride. The tandem makes for a heck of a frogging setup.

The DC in the name stands for digital control, Shimano’s braking system that utilizes a microcomputer to monitor spool speed 1,000 times every second and apply the perfect brake to every cast. That means you don’t need to slow down the spool with your thumb nearly as much. Just whip the lure out there and let the reel do the hard work for you. If you struggle with backlashes or just want to easily cast a baitcasting reel, the DC system is for you.

My questions, when I started looking at this Shimano reel, were how does it work and do DC reels need a battery? The microcomputer doesn’t need batteries because it’s powered by an electric current created by the revolving spool. It’s a genius design. It’s no wonder why the Curado DC won best freshwater reel at ICAST when it came out in 2018 and why pro bass fishermen like Aaron Martens use the Curado DC to fill livewells and cash checks.

My home state of Virginia has a lot of great fishing opportunities, from bull reds in the Chesapeake Bay, to mountain streams with native brook trout. But, on most weekends you’ll find me fishing one of the tidal creeks that feed into the Rappahannock or Potomac rivers.

In those creeks, you can catch a personal best largemouth, bowfin, or snakehead on any given cast. The creeks have long weed lines, thick hydrilla, and acres of lily pads, making them ideal places for frog fishing and putting my frogging setup to the test.

This year I set out to assemble an ultimate frogging setup. Previously, I leaned more toward more affordable frogging gear and had great success, but I wanted the extra edge great gear provides.

To choose my rod, I watched a ton of reviews, and went with the recommendation from Matt Allen of TacticalBassin. He is a huge fan of the Shimano Expride baitcaster rod, which is lightweight and provides plenty of horsepower to haul fish out of heavy cover. The fast action and extra-heavy power drives hooks home with authority. The line I chose for long casts and cutting through weeds is the 65-pound Power Pro Maxcuatro. It’s a smaller diameter than standard Power Pro, which puts more line on the reel. I’d need that extra line, thanks to the heart of the setup, the Shimano Curado DC. (You can buy the components of this setup by following the links above – they are affiliate links.)

From my first cast to my 500th, I could not believe how easy it is to cast really far with the Curado DC. Throwing a frog 40 yards is effortless, and those long casts enable me to cover a lot of ground with a search bait like a Teckel Honker. There’s also the added benefit of being able to make a cast to distant cruising fish. Fewer missed opportunities and efficiently covering ground is a huge win.

How far can you cast with the Shimano Curado DC? To find out I did a test on dry land. On a wind-free day, I made five casts with a Molix Sneaky Frog, which weighs ¾ ounce. I measured each cast using my Leica Rangemaster laser rangefinder. The five-cast average was 46.5 yards, with the longest cast at 48 yards. The consistency of the cast distance was also notable with each cast being within two yards of the average. I also tested the baitcaster reel on a tiny Molix Sneaky frog that weighs ⅜ ounce. My setup isn’t ideal for casting such a lightweight frog, but it still slung it 30 to 35 yards.

Covering a football field’s distance with two casts is incredible and it proved to be an asset on the water. On a recent snakehead trip I fished for an hour working through a creek without a bite. In that hour I covered some serious ground. I then located a productive 100-yard stretch where I landed three snakeheads. I quickly eliminated unproductive water and could spend my time picking apart productive areas. All while not picking apart backlash-induced bird’s nests. I’m no Ish Monroe and just OK with a standard baitcaster, but the Curado DC makes me look like a pro.

There are four brake settings on the Shimano Curado DC, not including the “wide open” setting. I experimented with all of them and found that setting 2 and 3 were ideal for most conditions and various sizes of frogs. On those settings, I threw bombs with minimal thumbing. If you’re learning how to use a baitcaster, setting 4 is a great starting point. You’ll lose casting distance on setting 4, but you’ll gain peace of mind that you won’t backlash.

Out of hundreds of casts, I only had one backlash and it was the kind of backlash that just took a few seconds to clear. I even attempted to induce backlash by whipping casts out instead of a smooth acceleration. No dice on getting the reel to backlash. Is the Curado DC backlash proof? Of course not. If you set it on the wrong brake setting for your lure and use poor technique, you can certainly get a nice bird’s nest. But, it’s really hard to do.

The 8:1 ratio I chose for my frogging setup picks up slack easily, which allowed me to get tight and set the hook after an explosive hit. This Shimano reel is smooth and made walking a frog with quick quarter turns a cinch.

All these features added up to a fun fishing experience. When you don’t have to worry about casting or fighting tangles, you get to relax and focus on fishing.

The Shimano Curado DC vs. the SLX DC

“They’re very similar from a fishability perspective, but the Curado feels much stronger and more durable while the SLX has a lot of plastic components that make it feel less so,” said fishing guide, Kevin Hughes.

What this Shimano Reel Does Best

If you’re looking for a high-end baitcasting reel that throws a lure a mile with minimal risk of backlash then the Curado DC is a fantastic option. Also, if you’re new to baitcasters or don’t want to risk a backlash ruining your day, then this is the reel you want to buy.

What this Shimano Reel Does Worst

It takes time to get used to the added casting distance of the Shimano Curado DC. It’s like one day waking up with Herculean strength, you’ll need time to calibrate your new capabilities. Be prepared to overshoot your target and hit the bank more times than you want. But, don’t confuse the DC braking system for autopilot. You still need to dial in the brake setting like a traditional baitcaster.

The Curado DC isn’t the most expensive reel on the market, but it’s also not exactly budget-friendly. If you’re on a budget and don’t need the top end of performance, you can get a great baitcaster for $100, like the standard Shimano SLX. A few years ago, I wouldn’t even think about spending $250 on a reel. But, as my tastes evolved, so did my budget.