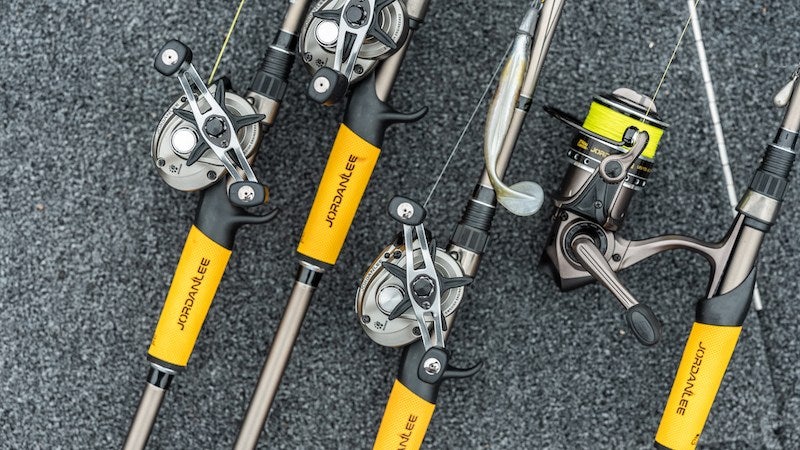 There’s a generally-accepted premise that freshwater anglers move from the least complex form of fishing reel types to the most difficult to master as they progress in the sport. That typically means starting with a push-button (AKA, “spincasting”) model, then moving to a fixed spool spinning reel before finally graduating to a level wind baitcaster. While a spincaster is reserved for new anglers, spinning reels and baitcasting reels are both used by experienced anglers, which is the source of the debate of baitcaster vs. spinning reel.

Some of the world’s best tournament anglers, like Mike Iaconelli and Brandon Palaniuk, have made hundreds of thousands of dollars with spinning tackle that was once derisively referred to in some quarters as “sissy sticks.” Spinning tackle can subdue everything up to and including the biggest marlin and tuna, but that doesn’t mean it’s always the right choice, nor is baitcasting gear. Unless you’re exceptionally hardheaded, if you fish in freshwater you need to have a mix of the two. Their uses may overlap, but in many cases one is better than the other.

Traditionally, many freshwater anglers set the line of demarcation at 10-pound test monofilament or fluorocarbon, or a braid of similar diameter. Anything below that line commanded spinning tackle, and anything above it called for baitcasting gear. Part of the reason was that spinning reels didn’t always have adequate spool capacity for heavier lines, and on baitcasters light line could get behind the spool and cause horrific tangles. Furthermore, baitcasters weren’t capable of casting super-light lures. With improved technology and the rise of equipment dedicated to “bait finesse” those distinctions are no longer as clearly defined.

Baitcaster vs. Spinning Reel: How are they different?

With spinning gear, the reel sits below the rod handle, attached by an extended handle that hangs it several inches down. A baitcasting reel, on the other hand, sits atop your rod and flush with the reel seat. On a spinning reel, the spool stays in a fixed position and by opening a bail the line is allowed to flow out toward the first guide. On a baitcasting reel, when the angler adds forward propulsion, the weight of the lure pulls the line and the spool spins.

On most spinning reels, the handle can be quickly and easily switched from left to right, or vice versa, to accommodate an angler’s preference. That’s not the case with baitcasting reels, so an angler who uses the “wrong hand” might not be able to borrow one from a friend.

Just like baitcaster vs. spinning reels are different, the rods are different too. A baitcasting rod usually has a “trigger” underneath the handle so that an angler has something to grab onto while he or she palms the reel. The handle can be a “pistol grip,” although those were more common on shorter rods decades ago, and now most baitcasting rods feature straight handles which make two-handed casting easier. Spinning rod handles are also straight but have no trigger, because the “stem” of the reel that connects it to the reel foot allows an anglers to retain a solid grip with multiple fingers in front of and behind it. Both types can be made of cork, EVA foam or other materials, and both can be solid from behind the reel all the way to the butt cap, or they can be made in a split grip fashion that exposes a portion of the blank. On a baitcasting rod, the guides tend to be comparatively small, and descend in size as they move from butt to tip. That progression goes in the same order on a spinning rod, but the first guide or two from the reel are usually fairly large, to corral the line that comes off in coils and tame it down to a manageable profile.

Read Next: How to Cast a Spinning Reel

As noted above, it may be tougher to learn how to use a baitcaster than spinning gear. A big part of that is the dreaded backlash or “bird’s nest” that plagues even some advanced and experienced casters. Because the spool spins, using the weight of the lure and the angler’s motion to pull it out, any change in the speed of the lure can have a deleterious impact. For example, if you throw into the wind, or hit a tree before your intended target, the spool may continue to spin while not taking out any more line, thus causing an overrun. Some of them can be drastic, forcing you to cut the line and respool, while most can be picked out with a little bit of patience and finesse. Just be sure that the line doesn’t have any nicks in it once the backlash is removed. Because of this issue, a baitcaster can be tough to use when very light lures are in play, or when casting into a headwind.

Spinning reels don’t have the backlash issue, but they can be plagued by line twist. This can be a real problem if the line is not spooled on in the same direction that the spool spins, or if the line is especially old. It can also occur if an angler reels against a slipping drag. Twisted line can lose strength, so it may need to be replaced, or it can be let out behind the boat to get “straightened.” Just make sure that you close the bail by hand, while forcing tight loops on the spool and keeping the line manageable.

The reels also differ in terms of how you release the line and then reengage them. Most baitcasting reels have a thumb bar that an angler depresses, holding a thumb lightly against the line, before releasing it during the cast. Then to reengage the reel the angler simply turns the handle. While most spinning reels can be reengaged this same way, as noted above that will often lead to problems with line twist and loose coils, so flipping the bail by hand is recommended. For casting, the angler simply opens that same bail, holds the line with a loose index finger, and then releases that line on the forward thrust. In both cases, the spool or the line itself can be “feathered” to alter or shorten the course of the cast.

While both types of fishing reels come in a wide variety of gear ratios (i.e., the number of turns the spool makes for each turn of the handle), baitcasting reels tend to be more widely-available in super-fast retrieves like 8:1 and 9:1, so if you’re engaged in a technique that requires a rapid retrieve, or picking up a lot of line quickly that should be your choice. In either case, check out how many inches of line the reel retrieves per turn of the handle, which may be more informative than just gear ratio.

Read Next: How to Spool a Spinning Reel

Which Fishing Reel is Best?

Let’s put the baitcaster vs. spinning reel argument to rest. “Best” is not an absolute qualification in this case, as either or both can perform adequately in a wide variety of conditions. Much of the decision will come down to personal preference and casting style. With light lures, spinning gear may be preferable, and for beginners spinning gear is more forgiving when trying to make casts into tight spots. Anglers can learn to skip with a baitcaster, but one wrong move or errant cast and you may regret that decision. Meanwhile, because spinning gear takes two hands to operate—to open the bail, make the cast, close the bail, and retrieve, it may take longer between casts to start your retrieve. It may even require changing hands. Meanwhile, because a baitcaster just requires depressing a thumb bar to be ready for action, you can often get in more casts over the course of a day. Once you master them, baitcasters provide excellent accuracy and precision for casting, flipping, and pitching lures.

It’s a personal decision, and one that may vary over time, but fortunately there’s no right answer. Let your comfort level and the fish tell you which reel to choose.