How to Cast a Baitcaster

Learn how to cast a baitcaster and avoid backlashes 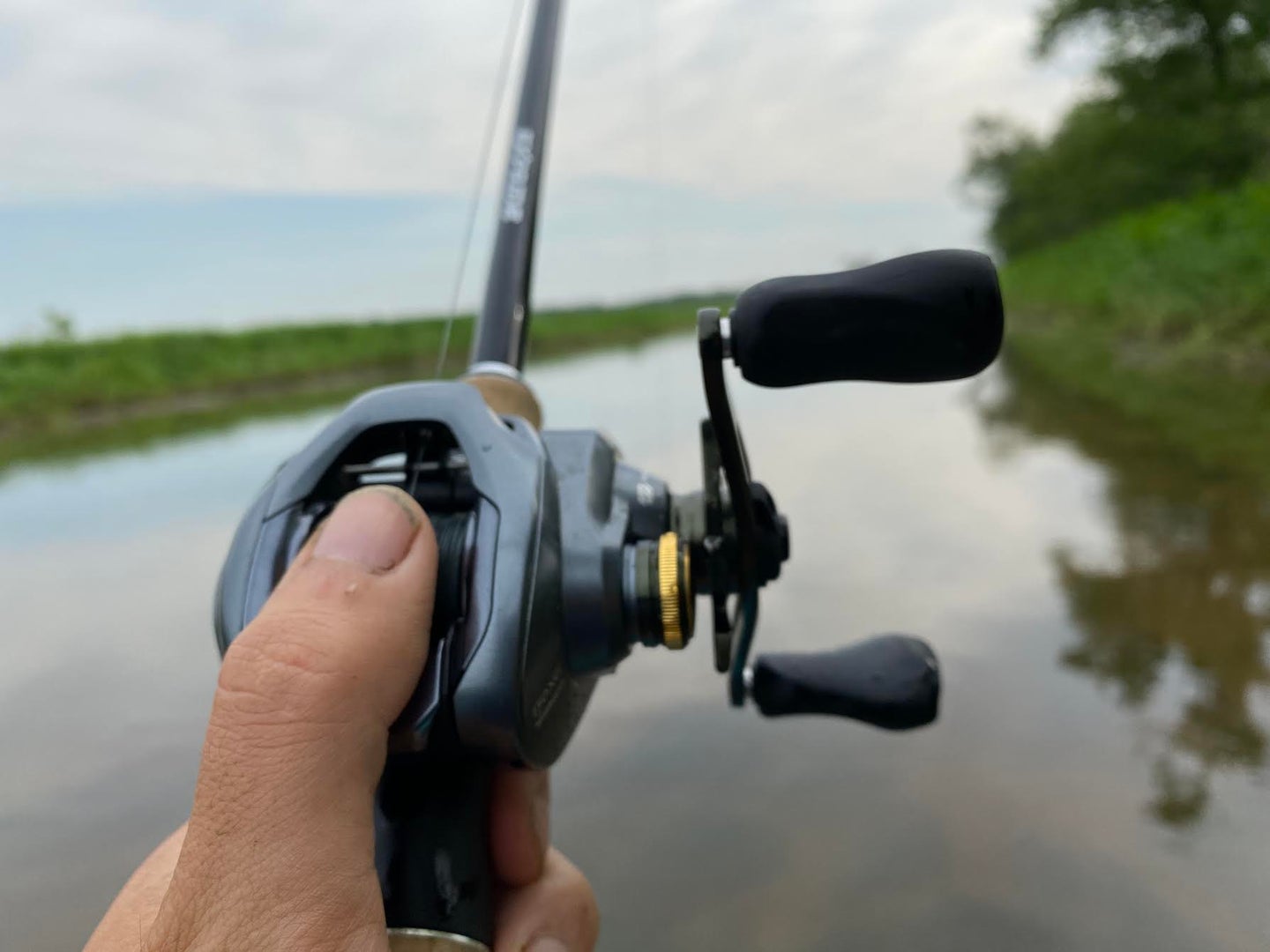 A level wind baitcasting rod and reel combination is a valuable tool for most freshwater fishing and many light tackle saltwater applications. They provide a direct connection to a lure or bait, and because most of them can be cast with one hand, you can make rapid-fire presentations. But, you need to learn how to cast a baitcaster to avoid the dreaded backlash.

Unfortunately, baitcasting gear can seem daunting to beginners. That’s because it has a reputation for producing backlashes (also known as “bird’s nests” or, euphemistically, “professional overruns”). Unlike a spinning reel, where the line comes off of a stationary spool, the spool spins on a baitcaster reel. That means, if line comes off of it faster or slower than the spool is rotating, it can end up creating a problem. Modern reels have various cast control mechanisms to minimize this problem, but it still can rear up at inopportune times, particularly when casting into the wind or casting lures at the lower end of a rod and reel’s suggested range. By practicing before hitting the water, and taking things slowly, it’s possible to enjoy the benefits of baitcasting gear without many of the downsides.

Picking Out the Right Gear

There are numerous brands on the market today that produce quality baitcasting reels, and while some of them can cost hundreds of dollars, it’s possible to buy a high-functioning reel for under one hundred bucks. If an angler is only going to start with one, they should  get one with a gear ratio in the 6:1 to 7:1 range, which will cover many different applications. Most reels have line ratings that vary depending on whether a user will be employing braided line, fluorocarbon, or monofilament. For most freshwater applications, 10- to 20-pound mono or fluoro, or 30- to 65-pound braid, will suffice. Fresh line should be spooled on, and if braid is the line of choice a backing of mono should be put in place to prevent slippage.

Historically, most baitcasting reels came with the handle on the right side. This is a poor choice for most right handed anglers, because it forces them to cast left and reel right, or cast right, and then switch hands before starting to reel, losing valuable moments and putting the rod in the weak hand during the hook set. Today most high-quality baitcasters come in both left- and right-hand retrieve and anglers should test both out in the store to see which will be more functional.

No matter which reel they choose, most baitcasting reels have a thumb bar that allows the spool to be disengaged without removing a hand from the handle. As you’ll see below, an “educated thumb” is often the key to how to cast a baitcaster.

With the reel properly secured to the rod, the line threaded through the guides and a lure of the proper size and weight tied on, the angler can take several simple steps before casting to make sure that distance is maximized and backlashes are minimized. Most reels have a cast control knob on the side that can be infinitely adjusted. It pays to start with it tight and loosen it gradually. If the reel also has a separate magnetic cast control dial, a new caster can start with that on a medium setting.

Before engaging in the act of making a full-length cast, a new angler should get used to how the line pulls off the reel with the cast control set fairly tightly. By simply holding the rod parallel to the ground, disengaging the thumb bar, and letting the lure fall to the ground with a light thumb tension the angler can get a sense of how to “feather” the line and then stop the spool in a timely fashion when the lure hits the ground. If the lure does not fall slowly but steadily, the cast controls can be loosened.

How to Cast a Baitcaster Efficiently

Once an angler gets a sense of how the weight of the lure pulls line off of a baitcaster’s spool, it’s time to make an actual overhand cast. Making sure that there are no obstructions to the rear, simply pull back the rod, disengage the spool, holding it in place with a firm press of the thumb. Then, with a gentle lob motion, move it forward. Why not a hard snap or “Hail Mary” bomb cast? Those will come later. For now the goal is just to get the lure moving forward. With a spinning rod and reel a novice angler can overpower or underpower the cast and not suffer any negative consequences, but with a baitcaster smooth operation and release are critical to avoiding massive overruns.

Throughout the motion of the cast, an angler will want to keep an eye on the target and follow through with the arc of the rod, but also maintain a sense of whether the lure might overshoot its intended destination. This can initially be done via sight, but eventually a more experienced caster will be able to sense that the lure is going too far. In that case, by gently feathering the spool with the thumb, the angler can decrease its rotational speed and retard the trajectory of the lure. This same technique can be utilized to ensure a feather-soft landing. Stopping it too short of the target may result in a heavy “plunk” that scares fish away, but by gradually slowing down the lure and then bringing it to a not-so-sudden halt at the water’s edge, it’s possible to make the presentation seem much more natural.

Once the lure is in the water, the angler needs to determine whether it needs more line and how soon to begin the retrieve. With a topwater popper, for example, the angler can engage the reel immediately and then start to retrieve or let it sit. With a buzzbait that sinks at rest, on the other hand, they will have to start reeling immediately to make it operate as soon as possible. If fishing in deep water and bottom contact is key, the angler may need to carefully feed out line to let the lure reach the bottom — too much pressure and the lure will pendulum back toward the boat, too little pressure and the reel may backlash. It’s always a fine line but one that gets much easier to discern simply by feel over time.

The basic casting technique works with overhand and sidearm casts, but there are several other key casting styles where the angler needs to employ a different motion or system. With traditional flipping, for example, the angler never disengages the reel — instead, it’s necessary to maintain a length of extra line in the “off” hand and dip the lure quietly into short-range targets. Pitching, on the other hand, is another short range strategy, but the angler does deploy the thumb bar and makes a quick wrist motion that keeps the lure skimming the surface of the water before falling silently under a dock or into the confines of a bush or laydown. Skipping with a baitcaster — getting a lure to skim along the surface like a flat rock and then disappear under canopy cover — may prove to be the most difficult cast of all. One false move, like hitting the water wrong or slapping a dock post, and the reel may be done for the day. Many anglers therefore prefer to use spinning tackle for skipping, but in the hands of an experienced caster, a baitcasting combo may provide a better tool for extracting big fish from heavy cover.

Just because baitcasting gear historically came with the implied threat of massive tangles doesn’t mean that even beginning anglers should not try them. Today’s reels, including some that are computer-controlled to prevent backlashes, are much more advanced than their predecessors, and today’s lines are much more manageable. There’s a reason that most pro bass anglers prefer to use baitcasting reels when they can — less line twist, more direct power. With a little bit of practice, casting one becomes almost second nature.