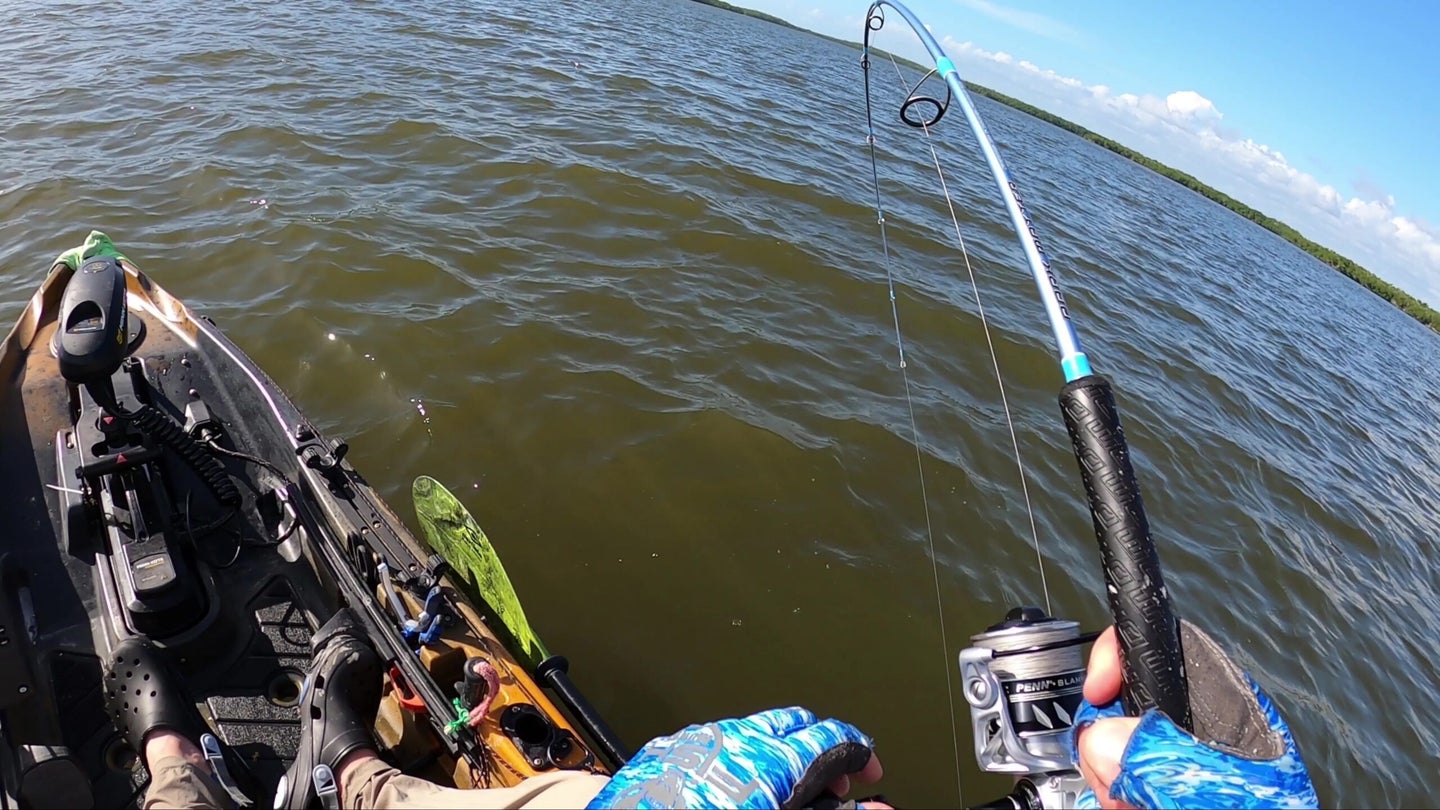 I bought my first Penn Slammer around 10 years ago for a trip to the Florida Keys where I did a lot of night fishing for tarpon in the bridge channels. I wanted a reel with a lot of stopping power, a smooth drag, and large line capacity in a reasonable-sized package. I needed the line capacity because I wanted the reel to hold enough 50-pound-test braid to survive the long tarpon runs. I was aware of the fine reputation of the Slammer reels, and the 560 looked like the right size for a 7-ft rod, which was the longest I could fly with. That reel turned out to be exactly what I needed as I landed several large tarpon from shore, including a 75-incher that weighed 150 pounds according to the weight calculator. Over the years the Slammer line of reels has gone through a series of upgrades, culminating in the new Slammer IV DX. For this review, I took the new Penn Slammer IV DX spinning reel to the Everglades to bucktail grouper.

Penn Slammer IV reels are built for serious gamefish. The Penn Dura Drag system gives a max drag of 30 pounds on the 4500-size reel. That’s a lot of stopping power. The reel now features a wider range of usable drag, and that drag has a better seal compared to older models. Nine sealed stainless steel bearings on the standard Slammer IV combined with the machined brass main and pinion gears yield unsurpassed smoothness that lasts. Of immense importance is the IPX6 sealed body and spool. Even if you’re not surf fishing, it’s nearly impossible to keep a reel dry when kayak fishing or when your rod is traveling in a boat gunwale rod holder. An easily overlooked but important feature on these reels is the hydrophobic line roller. This effectively eliminates any potential line roller stickiness, which impacts drag and cranking smoothness. The reel is offered in sizes from 2500 through 8500, and of special interest to surfcasters, there is a bail-less model in the 5500. As with other Penn spinning reels, the 40-inches of line retrieve per reel handle turn makes this a great tool for fast retrieve applications such as false albacore and tuna. If you want even more speed, the regular Slammer IV line includes high speed models of the 2500, 4500, 6500, and 8500 reels. The DX version of the Slammer IV takes things a step forward with machined stainless steel main and pinion gears and a 9+1 stainless sealed bearing system. The importance of the extra bearing in the DX is that it’s located in the spool, so there are actually two sealed stainless bearings to support the drag system.

Testing the Penn Slammer IV DX on the Water

Within hours of receiving my Slammer IV DX 4500 I spooled it with 30-pound-test braid and headed for Everglades National Park to chase grouper. These waters hold a good supply of manageable-size Goliath Grouper that respond well to jigs. I’ve bucktailed thousands of stripers in my life, but none hit as hard or dig for the structure with as much force as these fish. I paired the reel with a prototype 6’ 3’’ spinning rod that I was also testing. Because I had the responsibility of giving the go ahead to mass-produce that rod, my objective was to push extremely hard on it. If it was going to break, then this would be the best time it to happen. The new Slammer was a perfect addition to the test because I knew I could generate a lot of power with it and set the drag to slip only under heavy pressure. It took around an hour for the current to get up to a fishy speed, and it didn’t take long after that for my first test subject to catch the jig on the fall. A tug-of-war ensued immediately and as hard as I tried, I couldn’t keep the rod from being pulled down into the water, and the drag slipped ever so slightly, but enough to keep the line from breaking. Video replay showed it took a full 30 seconds to get the fish safely off the bottom to where I could ease up on the drag a bit to bring it to the surface. Those first five feet are crucial to winning a grouper battle, and the fish fought me for every inch. The next hard hookup demonstrated that the Slammer drag was indeed smooth, but that was my error because I loosened the drag a bit on a snag and forgot to put it back at the grouper setting. That cost me the fish as it hung me in the rocky bottom structure. I corrected that mistake on the last, and biggest fish of the day. With the drag nearly locked, I pulled hard enough on the rod to convince myself that I’ll need to run it over with my truck if I really want to break it. It took about 20 seconds to get that one off the bottom and a little longer to get it to the surface. I ended the day with a total of about 15 grouper of mixed species, and the rod and reel both passed with flying colors.

What the Slammer IV Does Worst

These are not light reels. The Slammer IV 4500 weighs slightly more than a Tsunami SaltX 4000, and 2.5 ounces more than a Penn Spinfisher VI. I would caution not to get too hung up on the weight difference until you feel the reel on a rod. These reels are getting relatively pricey. My Slammer IV DX 4500 sells for $310. At that price you’re only $60 under the cost of a Tsunami SaltX 4000, which is a fully submersible reel. If you’re primarily fishing the surf and your reel is going to see frequent submersion, it will make sense to consider the SaltX. If you’re not a hardcore surf angler, then the Slammer IV DX offers plenty of resistance to saltwater intrusion.

What the Slammer IV Does Best

This is the reel for fighting powerful gamefish in saltwater. The gears, drag system, bearings, and line roller translate to smooth power. If you require very high-speed presentations, the offering of four high speed models in the regular Slammer IV line will have you covered. All of this is housed in a package that keeps saltwater out of the gearcase and drag components. The handle and knob are so comfortable and powerful that I’ve been ordering extras to put on my Penn Clash reels for the past five years.

If this reel by Penn Fishing was lighter and fully submersible, it would be perfect. But still, this is a phenomenal spinning reel. In particular, the upgraded, machined stainless gears on the DX model should eliminate the biggest point of failure on my spinning reels. The high-quality gearing combined with the bearings and ball bearing line roller provide a level of smoothness that has to be experienced to appreciate. The DX version of the Slammer IV 4500 costs $30 more than the non-DX version, and I think it’s worth every cent for those stainless gears and that extra bearing in the spool. The Slammers have always been excellent reels, but now they’re in the awesome category.