The Bundy Trial: When Justice Fails

When I was a kid in Idaho, a backwoods poacher named Claude Dallas gunned down two game wardens at his... 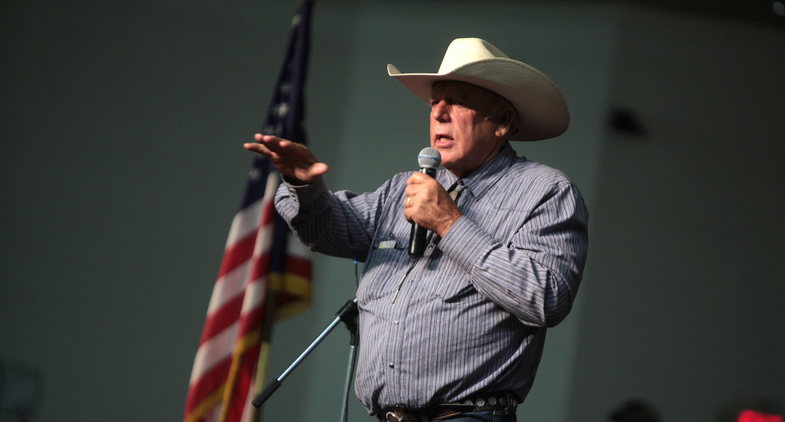 Cliven Bundy speaking at a forum in Arizona. Wiki
SHARE

When I was a kid in Idaho, a backwoods poacher named Claude Dallas gunned down two game wardens at his remote campsite in the Owyhees. He was convicted of manslaughter, broke out of jail, and lived a while on the lam.

Dallas became a folk hero to a stubborn but misguided group who seemed to believe in a mythological West where a cowboy hat, an anti-social attitude, and a gun were what made a man. But to anyone with a lick of sense, Dallas was just a thug playing cowboy.

This week, Cliven Bundy, of Nevada, and his sons join the ranks of western pseudo folk heroes. The irony is, Bundy was let out of jail by a judge who followed the letter of the law and the Constitution, ideas that Bundy openly defied.

Bundy owns a ranch near Bunkerville, Nev., and, like thousands of other western cattlemen, grazes his stock on public land – ground owned by the American people. But unlike virtually all those other ranchers, Bundy refused to pay the modest fee charged for grazing. Federal grazing fees are a pittance compared those charged for private land, and honest ranchers accept it as a pretty cheap way to fatten up a steer.

After grazing his cattle on public land for 21 years, Bundy racked up $1 million in outstanding fees. A judge ordered his cows off public ground in 2014. When law enforcement moved to execute the judge’s order, Bundy rallied an armed mob and held the police off at gunpoint. Rather than risk bloodshed, the feds backed off.

Four years later, Bundy sat in jail, awaiting trial for conspiracy. This week, a federal judge in Nevada dismissed the charges against Bundy and his sons. Not because of anything to do with cows and public land. Rather, Bundy went free because the federal prosecutors and the FBI so bungled the case that the judge determined there was no way Bundy could get a fair trial.

The U.S. Constitution, in theory, holds that it is better to set a potentially guilty person free than to risk imprisoning an innocent man because of inept or corrupt abuse of government power. So Bundy walks. As it should be.

Bundy emerged from jail defiant, pledging to keep on his battle against public lands.

“I don’t recognize the federal government to have authority, jurisdiction, no matter who the president is,” he told reporters.

Make no mistake. Bundy is no political prisoner. Bundy thumbed his nose at a federal judge who told him to get his cows off public land. He was charged because of his actions, not his beliefs.

Bundy posed on camera waving an American flag on horseback. But that was empty symbolism. His actions put him above the law, above the Constitution for which the flag stands. Ironically, his rights in the end were protected by that Constitution.

The Bunkerville fiasco sends a message that anyone can get away with breaking the law and not paying taxes, as long as they have a bunch of friends with rifles — and as long as they wear cowboy hats instead of hooded sweatshirts.

Imagine yourself in the position of a young law-enforcement officer working to safeguard our national forests and public lands from illegal abuse. This case must send a chill down your spine. Who, exactly, has your back?

Claude Dallas went back to prison and paid his debt to society. The Bundys’ fate is different.

Americans deserve answers. Both in Nevada and later in Oregon, the Bundys filmed themselves openly defying the law. Yet federal authorities screwed the pooch so badly they could not get a conviction. Americans of all political stripes should call for a bipartisan, open investigation to determine exactly what went wrong. The viability of our public lands and rule of law depend on an open accounting.