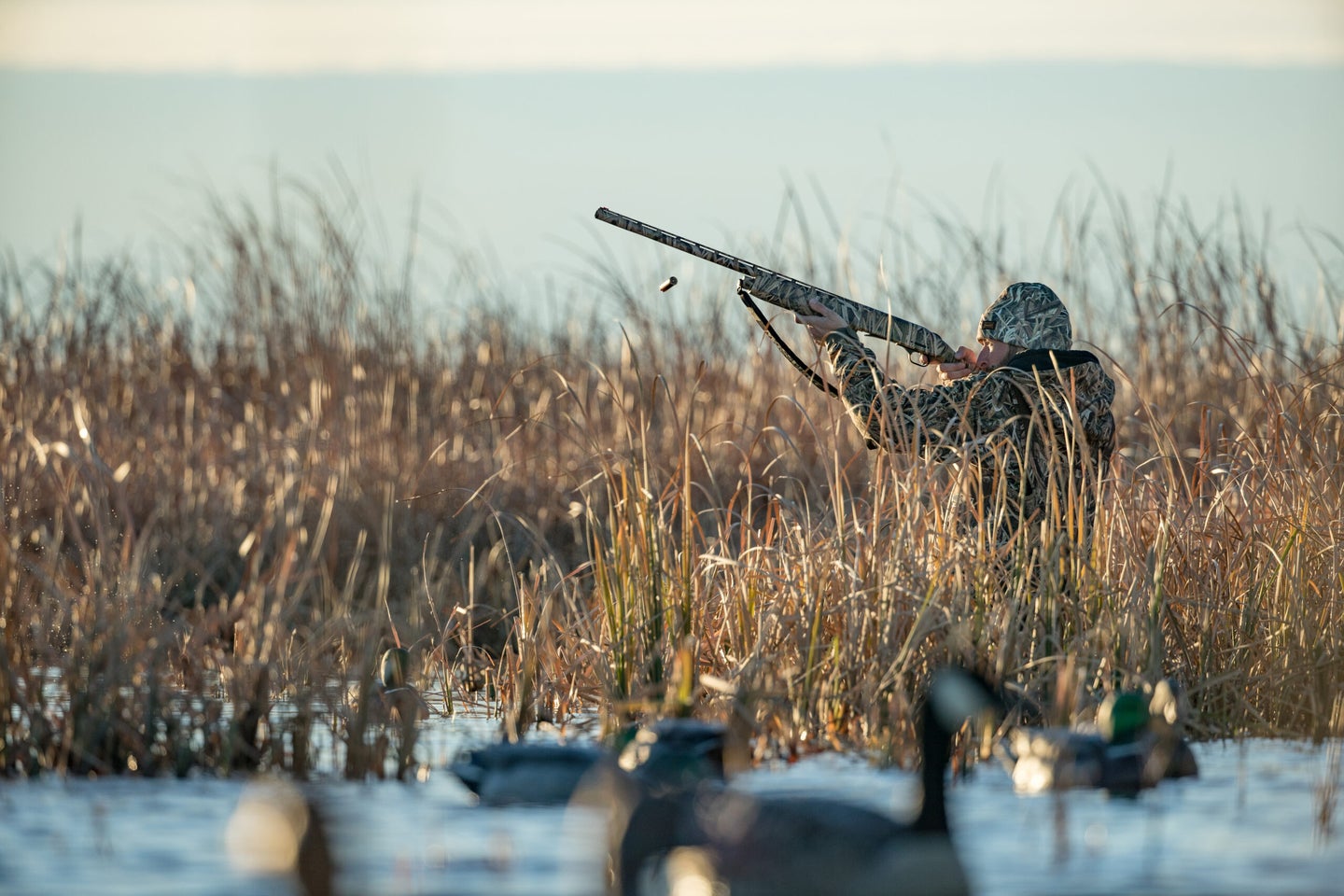 Waterfowl shotguns today have become a niche market. Nearly every major shotgun manufacturer, and many smaller importers, currently offer at least one tricked-out shotgun designed specifically for waterfowling. We’re not talking about guns simply dipped in a marsh grass camo pattern, either. We’re talking guns that come straight from the factory with modifications that used to only be available as custom add-ons. Enhancements like oversized controls, super-tough finishes, lengthened forcing cones, polished internals, and specialized choke tubes can improve both your shooting and overall hunting experience. Here’s how they do it.

The main benefit of larger controls, specifically oversized bolt handles and bolt release buttons on autoloaders, is their ease of operation when wearing heavy gloves, which waterfowlers often do, especially in the late season. A secondary benefit is they facilitate quicker load swaps. For example, a couple seasons ago my dog and I were walking back to the truck when I heard, and then saw, a flock of Canada geese winging directly towards me. I quickly pulled the bolt back on my Franchi Affinity 3.5, ejected the duck round I had loaded in the gun, chambered a goose round, raised the gun, and fired. The entire sequence happened in a matter of seconds. At the report, a single goose fell from the flock and into the marsh. Phantom happily made the retrieve. I was able to pull that shot off because the Franchi Affinity comes from the factory equipped with an oversized bolt handle and bolt release button, both of which enabled me to quickly swap a duck load for a goose load. The new Affinity Elite comes with an even larger Sure Cycle bolt release button.

Another semi-auto that comes with larger controls straight from the factory is Winchester’s SX4, which has an oversized bolt handle, bolt release, and safety button. Fabarm’s XLR5 Waterfowler and Mossberg’s 930/935 Pro-Series Waterfowl models have some of the largest bolt handles found on factory guns. Benelli’s new SBE 3 Performance Shop Waterfowl, Browning’s Wicked Wing A5 and Maxus, and Remington’s Versa Max and V3 Waterfowl Pro are all equipped with larger-than-normal bolt handles and release buttons as part of their upgraded packages.

Duck guns take a lot of abuse. Inclement weather, rough boat rides, metal-sided blinds, and wet dogs all take their toll. The most common problem a waterfowling shotgun faces is rust. Camouflage finishes do a great job of protecting metal surfaces from rust, but unfortunately they often fade, chip, or wear off. For hardcore hunters, Cerakote may be the answer.

Cerakote is a hard, ceramic-based coating that’s applied to metal surfaces to make them more durable. Cerakote resists corrosion and scratches, making metal almost impervious to the elements. Plus, it can be dyed in a variety of colors to give the firearm a unique appearance or provide a dull, earth-toned finish. For marsh guns, Cerakote is the new camo.

“Cerakote not only looks great, but it adds life to your guns by protecting the metal from rust and everything else,” says Rob Roberts, owner of Rob Roberts Custom Gun Works in Batesville, AR. “It does what it says it does.” Roberts’ gunsmithing company has eight employees who do nothing but Cerakote guns all day every day and still can’t keep up with the demand for this tough finish.

As a baked-on, ceramic-based coating, Cerakote is much harder than thin-film camo applications or even phosphoric acid-based Parkerizing. Plus, Cerakote can be applied to a wider variety of metal surfaces than Parkerizing. As for rust resistance, there’s no comparison between Cerakote and traditional bluing. While bluing looks nice, anyone who’s ever owned a blued shotgun can attest that rust is a constant concern, especially if the gun is subjected to any type of moisture.

This is why Cerakote is showing up on the barrels and/or receivers of more and more specialty waterfowl shotguns, with most gun companies now offering Cerakote on at least one of their models straight from the factory. It’s often paired with camo synthetic stocks and forearms to help the guns blend in and make them even more impervious to water and corrosion.

The forcing cone is the area of the bore just ahead of the chamber. Here, there is a slight taper between the chamber—which is larger to accommodate shotshells—and the smaller diameter main bore. In many shotguns, this taper is very sharp and short, often less than an inch. Lengthening the forcing cone to a more gradual two-, or even, three-inch taper provides the shot column a less abrupt transition into the main bore, hopefully resulting in improved patterns.

According to Roberts, who does most of the enhancements on Benelli’s Performance Shop shotguns, there are two main benefits of lengthening the forcing cone. “First, it helps produce better patterns by taking away some of the distortion from inside the barrel, which allows the shot to flow down the barrel and let the choke tube take over from there. Second, it reduces felt recoil because you are taking away back pressure and pushing it the other way.” Roberts also notes there are some velocity gains with longer forcing cones.

The benefits of forcing cone lengthening, both in terms of improved patterns and reduced felt recoil, are more noticeable in barrels with standard or slightly smaller internal bore diameters than in overbored barrels. For example, Benelli bores tend to be somewhat smaller than standard bores, so any performance enhancement will be more noticeable.

Keeping the inside of your shotgun clean and rust free is even more important than taking care of the outside. Still, many gun manufacturers overlook this critical area of their scatterguns, focusing more on the visible exterior rather than the hidden interior. That’s a shame, because how a gun performs, especially a semi-auto, begins on the inside.

However, not every shotgun manufacturer has neglected the internal health of their semi-autos. Benelli’s Performance Shop waterfowl guns feature a honed and polished action, which simply means several of the internal components have been smoothed out to facilitate faster cycling and follow-up shots. Fabarm’s XLR5 has a PVD coated bolt to resist corrosion.

Mossberg has taken internal care to a new level in its 930 and 935 Pro-Series Waterfowl semi-autos. Both feature a boron-nitride coating on the gas piston, piston rings, magazine tube, hammer, sear, return spring plunger, and return spring tube. This coating not only prevents corrosion, it also makes post-hunt clean-up easier and faster.

Likewise, the return spring in the stock, an area that’s frequently exposed to water, especially in flooded timber, is stainless steel to resist rust. The bolt slide, shell stop, and elevator have all received extra polishing to reduce friction and provide fast follow-up shots. In Maine last fall, I bagged my first drake black duck, hitting him three times in the air before he hit the water in an attempt to anchor him so he wouldn’t be lost to the expansive bay. He wasn’t. The gun I was using was a fast-cycling Mossberg 930 Pro.

Extended choke tubes tend to pattern better than those that fit flush with the muzzle. That’s because there’s a longer area within the tube, called the parallel section, which gradually constricts the shot column. It’s essentially the same concept as a longer forcing one.

“By extending the choke, you create a longer parallel or choke section which will throw tighter, denser patterns,” says Scott Carlson of Carlson’s Choke Tubes. “This is the biggest plus of extended chokes.”

Extended chokes also help protect the muzzle, not only from hard non-toxic shot, but also from bumps and dings in the blind. “Extended chokes can also be removed with your fingers,” Carlson adds. “If a choke gets stuck due to rust, that extended portion provides leverage, making removal much easier.”

Carlson notes that constriction can be laser etched on that extended portion for quick choke identification without removing the tube.

Unfortunately, waterfowl shotguns are a bit behind the times. Not many come with extended chokes, but a few do. Benelli’s standard SBE 3 comes with black, extended chokes, while the Performance Shop model comes with a set of Rob Roberts’ Triple Threat tubes. Franchi’s Affinity Elite also comes with extended waterfowl chokes, as does Remington’s Versa Max Waterfowl Pro. All three of Browning’s Wicked Wing models come with the company’s proprietary “Goose Band” chokes, the extended portion of which looks like a goose leg band. Besides their unique looks, these chokes perform extremely well with non-toxic shot.

I’m sure there are other models that come with factory extended chokes, but they’re in the minority. Fortunately, there are a slew of aftermarket companies that make waterfowl-specific choke tubes, such as Carlson’s Cremator, Kick’s High Flyer, Muller’s H20, Briley’s new Helix Hunter, and a bunch of options from Patternmaster.

Upgrading to an aftermarket choke is one of the simplest and more affordable ways to improve your shotgun’s performance. Best of all, many of these chokes allow the use of tighter constrictions than normal to be used with steel shot due to their superior, stainless steel craftsmanship. For example, instead of using IC or modified with large steel shot, an aftermarket tube in IM or even light full can often be used instead, extending the effective range by several yards.