.375 H&H Magnum: The Best Hunting Cartridge of All Time

Even with the radical progression in modern cartridge design, the venerable .375 Holland & Holland is still tops 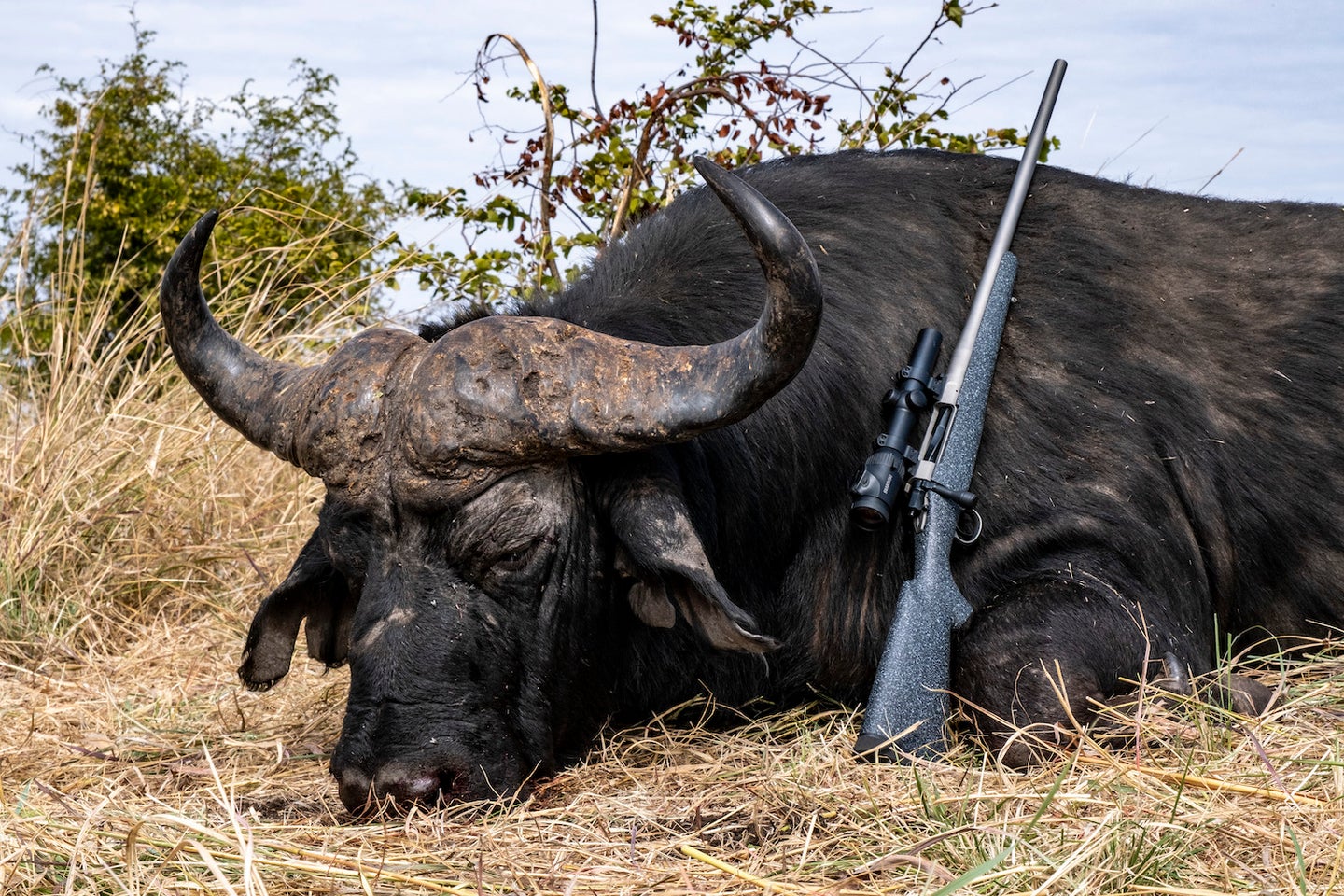 This battle-scarred Cape buffalo bull is exactly what the gun makers at Holland & Holland had in mind when designing the .375 H&H Magnum. Justin Moore
SHARE

It’s a timeless campfire argument: If you could only have one cartridge to hunt the world, which would it be? As much as I can feel like a cat chasing a laser pointer when it comes to adopting new and innovated shooting tech, my pick is decidedly old-school—the .375 H&H Magnum.

This shouldn’t come as a surprise. The .375 H&H always makes the top 10 in anyone’s list of all-time great big-game cartridges. If it doesn’t then you’re dealing with a quack.

I’ve shot the .375 H&H extensively over the years—most recently during a safari in Zimbabwe for Cape buffalo and plains game—and its track record on large animals over the decades is unequalled.

But it’s worth taking a deeper look at the cartridge to see why it deserves the top spot.

It was released in 1912 by the British gunmaker Holland & Holland. This was a time of tremendous innovation with sporting and military arms. Smokeless gunpowder was still relatively new, having made its debut in the 8mm Lebel in 1886, and gun makers were experimenting with smaller-diameter cartridges for use on large and dangerous game in Africa and Asia.

Continental European gun makers had stolen a march on their British counterparts, in particular German gunmaker Otto Bock who created the 9.3x62mm Mauser in 1905. That round was built to work with the magazine-fed Mauser 98 bolt gun and caught on with sport hunters. To this day it remains a popular round for European big game, such as moose and boar, and retains a following in Africa, Canada, and the United States. Gun makers like CZ-USA, Sako, Mauser, and Sauer currently make rifles for it. The British needed to put a dent in the 9.3×62’s popularity and Holland & Holland’s answer was the .375 H&H.

One potential strike against the .375 in this rivalry is that it is significantly longer than the 9.3×62 (3.600 inches vs. 3.291 inches overall length) requiring a longer and more expensive rifle action. The cartridge’s creators were aware of this, but they were playing the long game in terms of their expectations for what the .375 H&H could achieve.

With that extra case length and volume, the .375 was able to run a slower burning propellant that would generate sufficient velocity without incurring spikes in pressure. Given the relative instability of the powders of that era, this was a major consideration. Hunters in tropical climates are already subject to hot conditions that can increase pressure, which can lead to brass getting stuck in the chamber—a potentially fatal malfunction when facing dangerous game.

To further ensure that the .375 H&H would feed and extract reliably the designers gave the case a notable taper. With a cone-like profile and a shallow shoulder, a case will extract from the chamber more smoothly and with less effort than a case with sides that are nearly parallel and that has a sharp shoulder angle.

This is one of the reasons that “improved” versions of the .375 H&H with blown out walls and sharper shoulders—such as the .375 Weatherby Magnum and the .375 H&H Ackley Improved—are viewed with suspicion by many experienced guides and hunters. What they gain in velocity doesn’t justify the potential loss in reliability.

With that tapered case and shallow shoulder the designers had to figure out a way for the cartridge to correctly headspace in the chamber. (Headspace is the distance between the bolt face or breach face of the rifle and a fixed point in the chamber that acts as a hard stop for the cartridge to butt up against. Proper headspacing positions the case head and primer at the correct distance from the bolt/breech face and firing pin.)

To do this they added a raised belt to the .375 H&H. While not the first cartridge to employ this technology, the .375 H&H is rightfully considered the father of all belted magnums, given the number of subsequent cartridges based on its design.

When Africa instituted minimum caliber requirements for dangerous game, the .375 H&H was the smallest allowed, though exceptions were made for the 9.3x62mm in some countries. A lot of writers like to put a disclaimer on the .375, saying that while it is adequate for dangerous game it is a little “light” as a charge stopper.

I doubt that many of them have stopped enough charges with various cartridges to be able to validate that statement—I certainly haven’t—but I will take the word of John Taylor, the ivory hunter and author of the classic African Rifles and Cartridges who said he shot more than 5,000 rounds of .375 H&H on game over his career at everything from elephant on down.

Taylor called the .375 H&H Magnum, “undoubtably one of the deadliest weapons in existence,” and gives examples of its killing prowess, including stopping a charging and wounded Cape buffalo bull in its tracks. “If that’s not stopping power, I should very much like to know what you would call it,” he wrote.

It’s hard to imagine anyone equaling Taylor’s experience with the cartridge, so when he says it hits above of its weight class as a dangerous game cartridge and has legitimate stopping power, I take him at his word.

For me, this is where the .375 H&H really shines. Not only is it an obvious choice for the big stuff, but it will handle game of all sizes and is capable even on longer shots. As far as ammo goes, the two most popular bullet weights for the .375 are 270 and 300 grains, though you can find a selection of bullets in 250- and 260-grain configurations as well.

If you want to just shoot one type of ammunition for everything that walks, crawls or flies, select a good 300-grain bonded or expanding monolithic bullet and call it good. The Nosler Partition, Swift A-Frame, Trophy Bonded Bear Claw, and Barnes TSX all qualify. They will handle anything you throw them at.

A typical muzzle velocity for a 300-grain projectile out of a 22-inch barrel is 2,400 fps. Zeroed 3 inches high at 100 yards, it’ll be dead on at 210 yards and hit 10.5 inches low at 300. It won’t take much practice to learn how to perfectly place that bullet in the vitals at those distances, and a bullet of that size will hit hard.

But the 270s are an even better choice for game that isn’t thick skinned and that’s what I’ve used on big bears in Alaska and Canada and smaller animals. With a muzzle velocity of 2,690 fps, the 270s when sighted 2.5 inches high at 100 will hit point of aim at 225 yards and will only be 6.4 inches low at 300. This generous point-blank zero provides a lot of latitude for range estimation error.

I’m not a fan of heavy recoil and compared to some of the smaller (yet effective) cartridges like the .308 Win., or today’s darling—the 6.5 Creedmoor—the .375 H&H Magnum is a bit of a thumper.

In fairness, however, that’s only an issue when shooting off the bench. When practicing field shooting, which you should be doing most of the time anyway, the .375’s recoil is manageable. But if recoil’s a concern, just load some .375-caliber bullets with Trail Boss powder and that’ll turn the cartridge into a plinking pussycat.

While the design of the cartridge was well thought out, and while it’s record on game for more than a century is undeniable, the ultimate reason the .375 H&H deserves the top slot on that list of great cartridges is that by anybody’s standards today it is still such an effective killer. Animals hit with it don’t go far. The bullets have good sectional density and penetrate deeply while punching through the heaviest bone and tissue. It isn’t a function of energy transfer—the idea that energy kills is myth—but it is a matter of the tissue destruction from the bullet’s construction and the hydraulic shock it imparts when it impacts at velocities of 2,000 fps or more.

When you look at the whole picture—effectiveness on game of all sizes, utter reliability, tolerable recoil, relatively flat trajectory to 300 yards, and outstanding terminal ballistics—there isn’t any other cartridge that compares. That’s why the .375 H&H Magnum is still king.

Back in 2007 Hornady and Ruger teamed up to introduce the .375 Ruger. It sort of got lost in the deluge of cartridge introductions around that time and has languished in relative obscurity since. That’s too bad because it is a hell of a cartridge.

What differentiates it from the .375 H&H is its shorter length—3.340 inches—that allows it to run in a standard-length (.30/06 sized) action. With advances in powder technology the .375 Ruger delivers the same ballistics as the .375 H&H but out of even shorter (20 inch) barrels. It is beltless and headspaces off the shoulder and is very accurate.

Read Next: 5 of the Best All-Around, Big-Game Hunting Cartridges

I’ve used it on two brown bears in Alaska and couldn’t have been more happy with its performance. If a hunter were looking for a more modern candidate for the best cartridge to hunt the world, the .375 Ruger is one to consider.