The 3 Golden Rules of Defensive Carry

How much handgun is too much? Or too little? Our expert answers these tricky questions 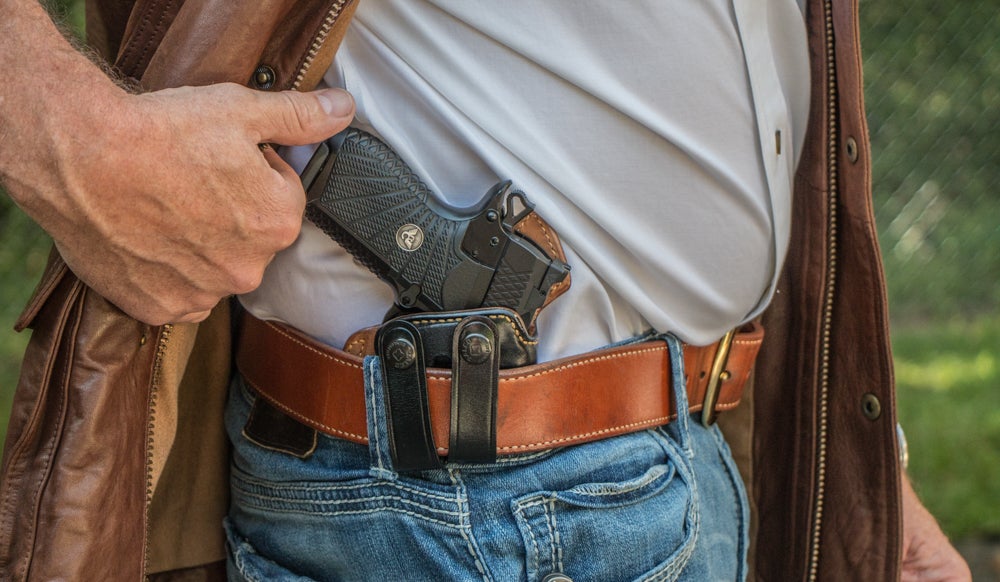 Questions about defensive carry almost always include debates on which caliber is enough for personal protection. Richard Mann
SHARE

What’s the best defensive handgun? There’s no easy answer to this question, but if you had to shoot to save your life while being attacked, you’d probably like to have the biggest handgun you could find. I know I would. Of course, there are some problems with big and powerful handguns for defensive carry: They’re hard to carry and hard to conceal, and they recoil with enough force to twist your own wrists into submission. There’s a reason nearly every .44 Magnum revolver that’s for sale on the used market comes with half a box of ammunition.

Robert Ruark made the “use enough gun” phrase famous. In fact, it was the title of one of his books, published in 1965 after his death. Ruark’s reference to enough gun was about hunting dangerous game, and he did a good bit of it. He shot lots of buffalo, several elephants, two lions, and multiple tigers. He was even mauled by an Asian leopard. So Ruark had some experience to back up his advice, advice which has since been applied to hunting all sorts of big game and even to defensive carry.

Rule No. 1: Defensive Carry Means Having a Gun

When it comes to the self-defense handgun, the question naturally follows: What is enough gun? Can you have too much gun? Handguns effectively stop attacks in several ways. The first and most common is just their mere presence. Countless assaults are thwarted every year just because the good guy had a gun. Will it work for you? Maybe. There’s no way to know.

Another way handguns save lives is when they’re used to shoot the bad guy. This can result in a superficial wound so painful or terrifying to the attacker that they change their mind about doing bad things. A wound from a handgun can also cause voluntary collapse due to the attacker realizing they’re shot and succumbing to the fear of what the wound might ultimately cause. And then there’s involuntary collapse. This occurs about from a wound that breaks support structure, induces unconsciousness, and on rare occasions, causes near-instant death. In almost every case where the attacker is wounded, shot placement plays a huge role in the outcome. Maybe Ruark’s advice should have been “Hit ’em in the right spot.”

Rule No. 2: Nothing Is Certain

The problem with shot placement is that little is guaranteed. While being assaulted and fearing for your life, it’s extremely difficult to shoot with assured accuracy. To compound the problem, unless the bullet strikes and sufficiently damages the central nervous system, the reaction to getting shot is mostly a dice roll. The mental state of the attacker and whether they’re under the influence of any substances also plays a role in the outcome.

he armed civilian must make a choice regarding the gun they will carry. Without question, a .44 Magnum, or some similar very powerful large-bore handgun, can inflict a very nasty and painful wound, even in a location that does not have a high potential of lethality or inducing collapse. On the other hand, as we mentioned, handguns in this power range are extremely unwieldy, difficult to conceal, and difficult to control during recoil.

Rule No. 3: Carry Whenever Possible

After having a gun, the next requirement for defensive carry is having a gun that’s compact and light enough you’ll actually have it with you all the time, because none of us know when a deadly assault might occur. Beyond that, the handgun needs to be compatible with your abilities. In other words, you need to be able to manage the handgun during recoil and quickly shoot it with a competent level of precision.

What cartridge should it be chambered for? We never really know what enough gun will be. Bad guys have been stopped with .22s and have also continued to fight after being center-punched with a .357 Magnum. The most powerful cartridge that will allow you to still do all those things well is the correct answer. Anything beyond that is too much gun. Worry about having a gun and being able to use it effectively before you worry about what kind of gun will be enough.

Read Next: The Top 10 Best Handguns for Carrying

Using a gun for hunting is entirely different than carrying a handgun for self-defense. When hunting, you control the outcome and only shoot when the situation is right, and then only because you want to. With self-defense, you have no control of when, where, and how the event will unravel. All you can do is react with what you have with you. If you have too much gun, you might have left it at home or you might shoot it poorly.