How I Turned a School Bus into a Mobile Hunting Lodge

This hunter fixed up a bus so he could live out of it and hunt public land. Here's how he did it. 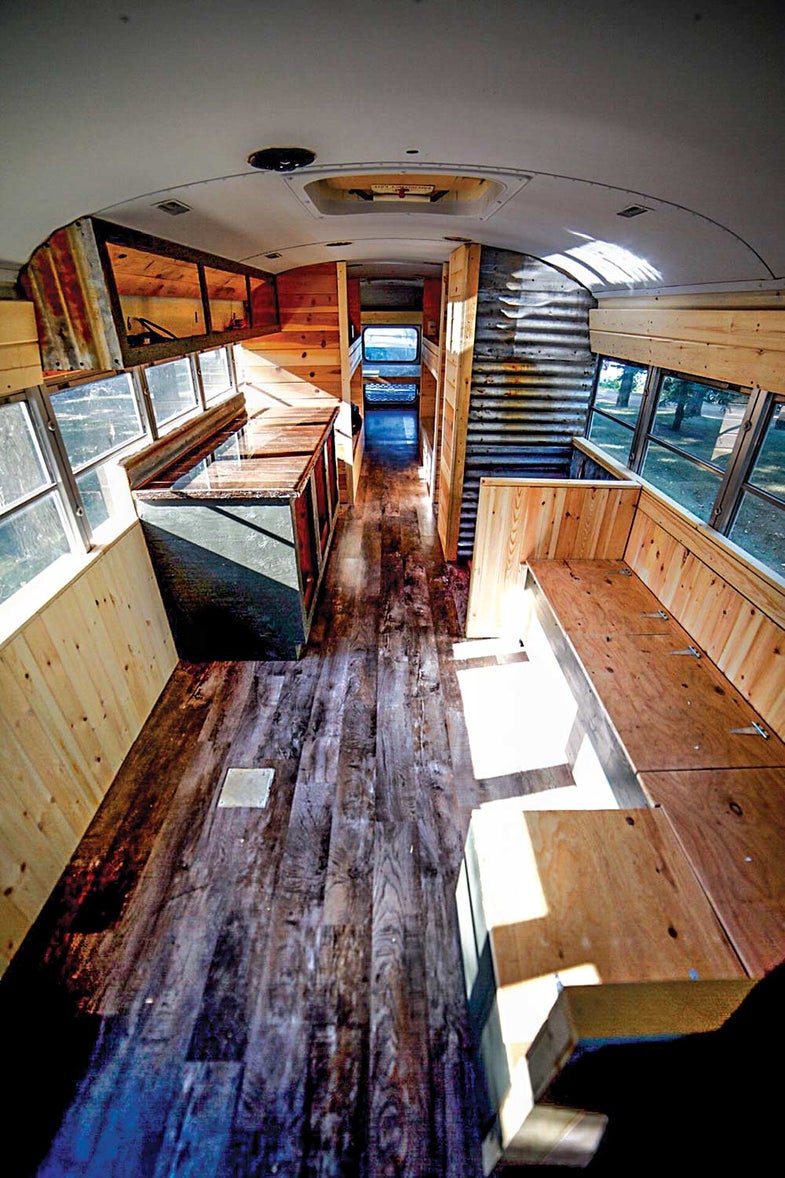 I gutted and remodeled a school bus with the intention of living out of it for a year as I hunted and fished public land. I didn’t have any previous building experience, so the learning curve was steep. But with a good set of tools and a can’t-quit attitude, it went as well as I could’ve hoped. Whenever I hit a snag, I’d sit on the deck with a beer and study ­YouTube tutorials until I ­figured it out.

I bought this 24-year-old bus off Craigslist for $3,500. Then I spent five months planning the build, exploring Google, YouTube, and Pinterest for ideas and advice.

Then I got to work. After ­removing the seats, I painted the ceiling, installed flooring, and started work on the walls. Next I built the furniture: two sets of bunk beds, a queen bed, kitchen cabinets, and a couch.

Once the framework was completed, the tedious part began. The dimensions of the interior required more cuts and sawing than I imagined. Luckily, I had access to someone’s large stack of leftover, mismatched tongue-and-groove pine, and I was able to use it to cover much of the interior. I scavenged tin from behind my ­brother’s hunting store to cover other big areas. My forearms are still sore from using tin snips to match the curve of the ceiling. If there’s one bit of advice I can give to anyone pursuing a similar project, it’s this: Calculate how many two-by-fours you think you will need—then double it.

After one month of work, I was two-thirds finished. Last July, my friends and I spent three days in a 90-degree metal shed painting the bus, covering the iconic yellow exterior with a vintage-inspired green and white.

The rest of July found me ­finishing the pine and tin work, and installing electricity. Simplicity was my goal, so I used a power converter that charges two deep-cycle ­batteries in a 3,500-watt inverter, which in turn powers three extension cords for lighting and charging electronics. I have the option to convert to solar if I want to down the road.

Finally, I built the framework for the 10-by-20-foot enclosed awning adjacent to the bus, and had someone sew the fabric, which puts the whole setup at about 400 square feet. When it’s all set up and the wood stove is crackling, the bus makes for a seriously homey base camp.