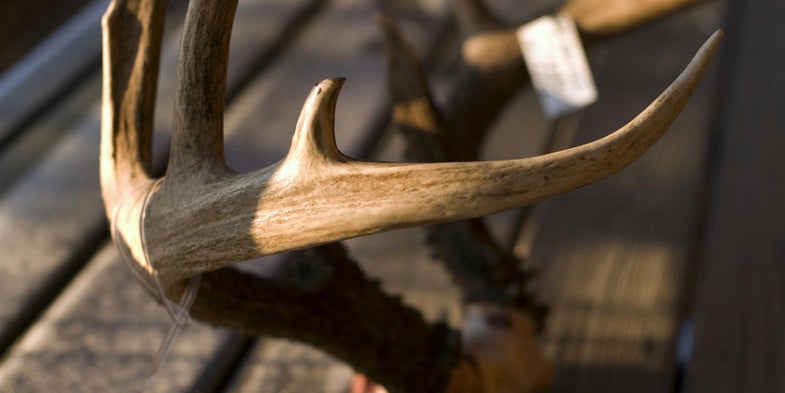 Getting a rack scored by the Pope & Young Club might sound like a formal event. But in reality, it’s enjoyable and casual—if you have the right attitude going in. Last year my father and I took two whitetail racks to be scored and we were greeted with a wave and a large smile as we pulled into scorer Stan Zirbel’s driveway near my home in northeast Wisconsin. As we settled into his basement, Stan began asked us about our past hunting experiences and told us stories of past trophies he’d had the pleasure of scoring. Regardless whether our kills reached the Pope and Young books, I knew my father and I were in for quite the experience. Before having your trophy scored, there are a few things you should be aware of regarding the history of Pope & Young and the process of having a trophy scored. Here are the top five things to know.

The Pope & Young Club is the foremost organization when it comes to preserving the future of bowhunting by promoting engagement and ethical hunting. The measurement process originated as a way of recording details on species thought to be disappearing due to habitat loss or poaching. To this day, the historical record books are used as data points for biologists to determine healthy herds and local habitats. As my scorer, Stan Zirbel, also says, “The measurement process is partially about celebrating the harvest of a great animal, but really, it is about respecting the animal and handing down the passion for land and tradition.”

If you have a trophy measured by a scorer, you will quickly be enthralled by the history of the club. Zirbel said historically, great-scoring whitetails have been elevated by their symmetry and the length of both the tines and main beams.

Zibrel’s enthusiasm and friendliness stem from the pleasure he has for meeting new hunters and the trophy animals they bring him, but he also maintains enthusiasm throughout the process because, as he says, some folks do not always like the final measurement results of their animal. He encourages hunters to go into the measuring process with an open mind and to not only focus on the score, but to re-live the hunt and the experience. If your animal appears to be on the border of making the books, keeping personal expectations in check will make sure you still have a great experience.

The process to locate an official measurer is not difficult. The P&Y Club lists its measurers by city and state and provides their contact information to make contacting one simple. P&Y has measurers spread out and close enough to larger cities, yet not far from the rural locales either. Measurers are not paid and many of them have day jobs. You will probably need to meet with them during an evening or a weekend in order to have your animal measured.

If you harvested an animal that meets P&Y standards, the process for recording it in the books is simple. Once you have it measured, the official scoring form and the signed “fair chase affidavit” (a statement saying you harvested the animal in accordance with game laws) and three photographs of the rack must be mailed to the club for review. The $35 fee for this goes to supporting conservation and securing the future of bow hunting. Once your trophy has officially entered the books, you will receive a copy of the score sheet and a certificate for framing.

Read Next: So You Want to Learn to Hunt With a Traditional Bow

Whether your animal reached P&Y standards or not, keep in mind that measurers are unpaid volunteers. So be courteous of their time and effort they put toward your animal. Zibrel claims hunters occasionally arrive with animals that fall well short of P&Y standards (especially whitetails). Keeping your expectations realistic and maintaining a good attitude will keep your visit fun and rewarding. The measuring process I had with my whitetail deer was satisfying in part because it made P&Y, but I also because I learned about the history of archery hunting and what that meant to me personally. As I found out, these big game ‘trophy clubs’ do more than measure inches.