How to Pick the Right Flashlight for Self-Defense

Considerations for using flashlights to help keep you safe 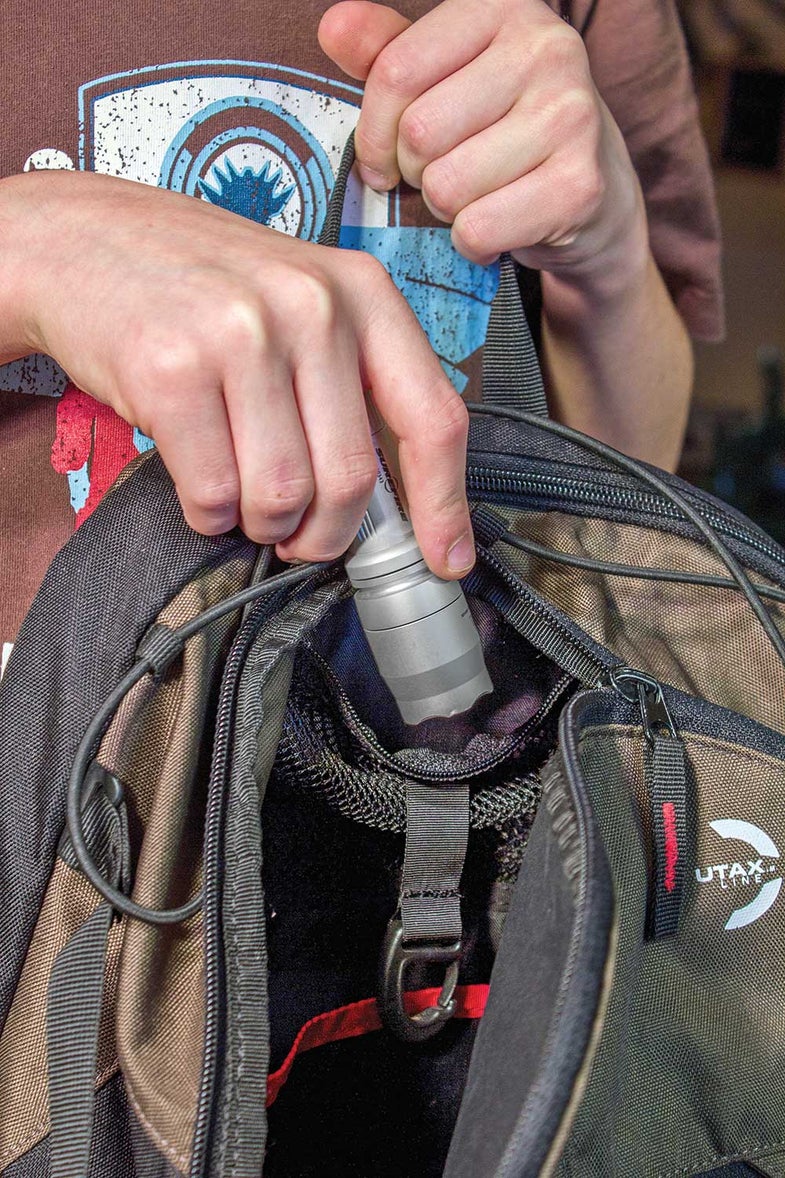 A small LED flashlight can help you turn the tables on an attacker. Richard Mann
SHARE

Bad guys are opportunistic predators who take advantage of the weak and unprepared. They’re no different than the predators in the wild, who pounce when the right opportunity presents itself. Bad guys like the anonymity of darkness and the surprise it affords them. One of the most overlooked and best personal-­protection tools at our disposal is light, and you should use it to your advantage.

Most violent crimes occur during conditions of limited visibility. This gives human predators their best chance for success. It’s also why floodlights and motion-activated lights around people’s homes are popular and efficient protection tools. The same logic applies on the street.

Imagine a mugger lurking in a dark parking lot. He’ll target the car or person in the dimmest, darkest area. If you’re strolling across the pavement with a high-intensity flashlight, your chances of being attacked are drastically reduced. This is because light draws attention, circumvents the element of surprise, and eliminates the anonymity of a potential attacker. Light also conveys an impression of power and control.

The characteristics of the best flashlights for personal protection can be represented by what I call the Rule of the Three Ls: lithium, LED, and lumens. Let’s examine each to better understand its importance.

The most common flashlight bulbs are incandescent and LED. Incandescent bulbs provide high output for their size and produce natural-appearing light. They require periodic replacement and are not impact-resistant. LED bulbs are solid-state creations, last a long time, come in a variety of colors, are energy-efficient, and are very rugged. They’re also more expensive, but they deliver extremely long runtimes at low illumination levels.

Flashlight output—brightness—is measured in lumens. The best flashlights produce consistent illumination across the entire beam—meaning the edges of where the light hits are just as bright as the center of the beam. Overall brightness comes from consistent beams, battery power, bulb quality, and the reflector design. Self-defense flashlights should have a minimum of 60 lumens, but twice that is a better place to start. This is enough brightness to search a building or temporarily blind an attacker.

If 120 lumens are good, 240 should be better, and 480 should be great…and so on up the line, right? Yes and no. As the lumen rating increases, so does battery draw. More lumens often means larger and heavier flashlights. The Surefire Hellfighter produces 3,000 lumens and is about the size of a roll of paper towels. It will melt a vampire and burn the hair off a werewolf, but you won’t want to carry it to town or even to the outhouse.

You want a light that is reliable and rugged, of course, but for personal protection, a light needs to be compact, concealable, and comfortable to carry. Surefire’s E1D LED Defender epitomizes all of these requirements. It produces 300 lumens of felon-blinding light, weighs only 3.4 ounces, and measures only 4.5 inches long. It comes with a pocket clip for easy carry and serrated end caps to provide extra striking potential, and it has a low-output 5-lumen beam to help you read the menu in a dark restaurant or find the stuff you dropped between car seats. Retailing for $240, the E1D might sound too expensive. However, it will last longer than you will and is probably more dependable.

Weapon lights are often considered an alternative to a handheld flashlight. But keep in mind that with a weapon light, you’ll have to point your gun at anything you want to illuminate. This could not only be unsafe and unwise, but in some jurisdictions pointing a gun at non-threatening humans is wanton endangerment—a criminal offense. A weapon light is great for shooting in low light, but it is not a flashlight and should not be used as one.

Remember, in a violent encounter, light equals power, and he who controls the light is in charge. And being in charge is definitely a good thing.