The Ultimate Guide to Cooking Wild Game with Alcohol

If you do it right, cooking with alcohol will only enhance the flavor profiles of your wild game meat 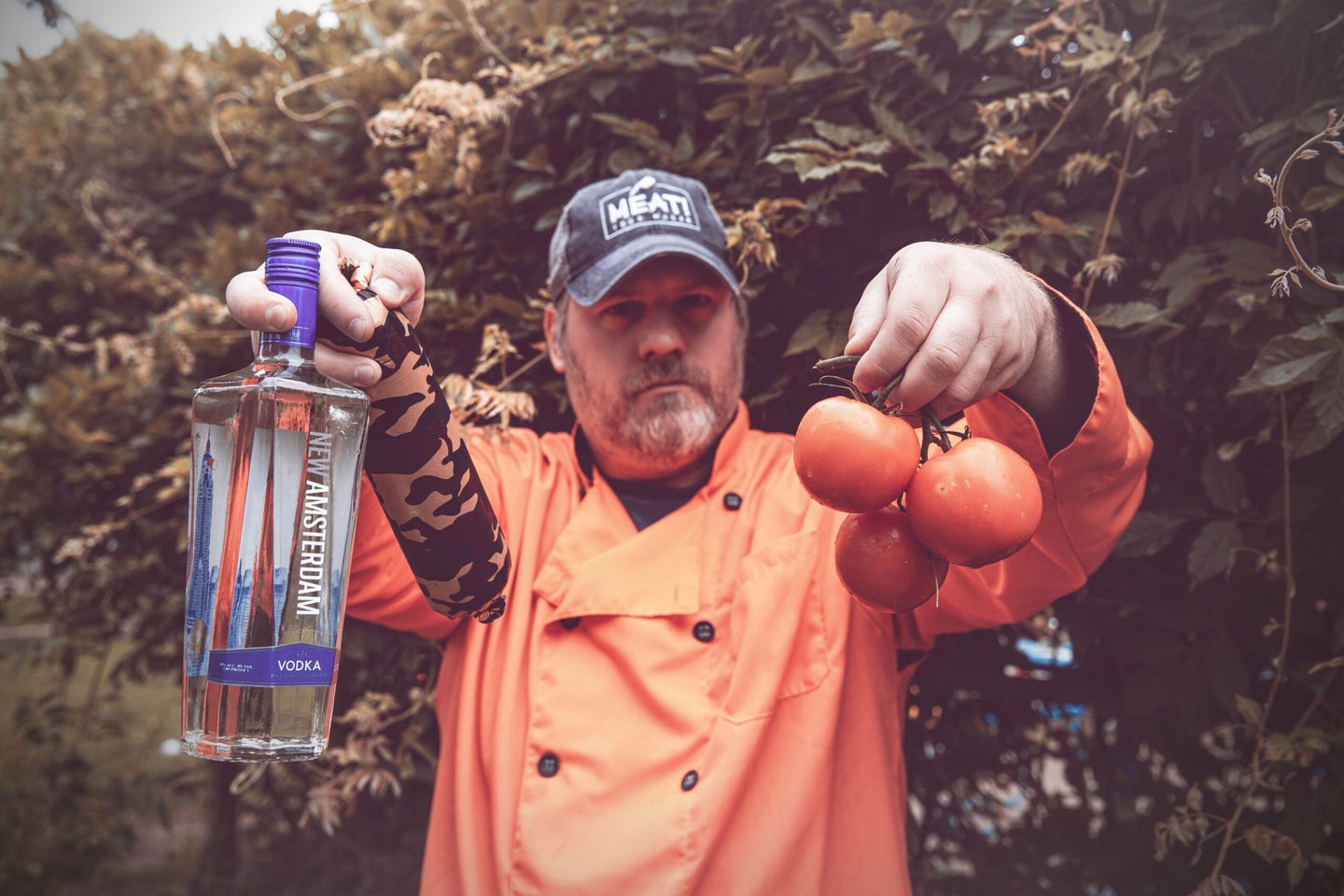 Here is how to cook wild game with different types of alcohol. Jack Hennessey
SHARE

My first career was working as a line cook at a restaurant. Back then, I didn’t know much about cooking with alcohol, even though I was really accomplished at drinking it. Fact is, you can use all sorts of booze in different ways to cook a variety of wild game. It’s not overly complicated and will enhance the taste of your meat. Here’s how to cook your next wild game meal with alcohol.

Does Alcohol Burn Off During Cooking?

Alcohol evaporates at 178°F, meaning once you start simmering a dish, alcohol starts burning off. However, a study from the U.S. Department of Agriculture’s Nutrient Data lab found food baked or simmered in alcohol for 15 minutes still retains 40% of the alcohol. After an hour of cooking, 25% of the alcohol remains, and even after 2.5 hours there’s still 5% of it.

The general consensus is it takes 3 hours of cooking between 180 to 325 degrees to fully evaporate alcohol, though the size of the cooking vessel plays a part. The larger the cookware, meaning larger surface area, the quicker alcohol will evaporate. And, of course, the hotter that surface area is, the faster evaporation occurs.

For example, a chardonnay cream sauce that is simmered for 1 hour will retain 25% of alcohol. Typically speaking, chardonnays don’t go above 15%, so what remains is 3.75% alcohol. If you used two cups, that is basically like having a very-low-alcohol-content pint of beer present in your dish.

You should know some alcohol, in most cases, will remain after cooking. This may affect your decision as to what to serve and to whom. For me personally, remaining alcohol content is not something I worry about. My wife is pregnant and I have a 4-year-old daughter and I will use alcohol for cooking, but it’s never a lot and if the spirit has a higher ABV (alcohol by volume), I am using very high heat initially and likely simmering for a half hour afterward.

Your Dish Should Never Taste Boozy

Think of cooking with alcohol like you would an MLB umpire or NBA referee. Yes, we know they’re there, but we should never have an adverse reaction to their presence. Same goes with alcohol—you know it’s there, but it shouldn’t overpower the main attraction, which is the delicious meal you’re plating. In baking, it’s a slightly different story. I’ve enjoy some boozy rum cakes in my time (but that isn’t wild game, so it’s not applicable here).

In my kitchen, this is likely the most-often-used technique when it comes to cooking with alcohol. What is deglazing? It’s using alcohol to sweep a skillet or pan of brown bits, fats, and sugars. The alcohol breaks loose fats and seared bits. It’s like cleaning your pan or skillet but with delicious results. For example, searing strips of venison in a hot skillet will create brown textures on the bottom of the skillet. A quick douse of bourbon will loosen up those bits and bind them to the venison strips in an amazing glaze.

Deglazing is also the start of great sauces, gravy, soups, and stews. Every Thanksgiving I like to roast my turkey in a large pan and when the turkey is done roasting, I remove it and use a white wine—perhaps a cup—to pour in the roasting pan to pick up those delicious brown bits. That is the start of my gravy.

The alcohol you choose depends on your desired flavor profile. A general rule of thumb is darker alcohols go better with darker meat (e.g., bourbon with venison versus white wine with turkey). You only need a couple tablespoons worth to collect the brown bits. Yes, you can use more, depending on the recipe, but it doesn’t take much alcohol to pull up those brown bits.

If you’re using high-alcohol-content spirits, like bourbon, know that an open-flame burner can create bigger flames when you add alcohol that is flammable. The higher the proof, over 80, the easier it is to light on fire. You can turn off your burner and still deglaze your pan (the pan will be hot enough). Also, consider just pouring in a shot or two and using that to deglaze, versus pouring in the high-proof alcohol from the bottle—any bit of splashing may cause flames to soar. Once done deglazing, turn the burner back on.

How do you decide what wine to use? First, you need to know if you’re requiring a dry red or fruity red; or a white, perhaps dry or fruity. If you’re making a marinara sauce, what are you going for? Earthy tones to match earthy game? A dry red will work. But what bottle? My recommendation is always if you’re going to enjoy drinking it, you’re going to enjoy it in your dish. After all, chances are only 2 cups worth is going in the sauce (if that), while the rest is going in your glass.

There is a cream sauce I make for seared salmon, which my wife says is her favorite dish, but if I change the chardonnay to something she doesn’t like—say a fruity, sweet pinot—she can tell I swapped in a different wine, and she doesn’t hesitate to let me know about it. My point is, the flavor profiles will change with different types of wine, so use one that you (and more importantly your significant other) enjoy drinking.

The Versatility of Beer

Great for simmering brats or adding to barbecue sauce for an after-smoke venison ribs braise, beer can be used in a myriad of ways for cooking. For beer-battered fish, it’s essential. Just like wine, choice does matter. An IPA is going to taste different in your cooking compared to a stout or pilsner. A light beer may compliment a dish while a darker, more flavorful beer, like an IPA, may vie for some of the spotlight. It’s all a matter of what flavor profile you are going for and, just like wine, what you enjoy drinking.

Get Started with Bourbon and Whiskey

A fantastic choice for deglazing or as the start to a gravy or a stew, bourbon or whisky will leave behind traces of its innate flavor. This is something to consider when deciding what to pair your meat with. I’m a big proponent of starting a venison stew with a quality bourbon. You can also start your deer steaks with either of these. Don’t go overboard though. You don’t want the entire dish to taste like a bottle of Jack Daniels.

Gin Is Best For Seafood

Derived from juniper berries, cooking with gin adds distinct aromatic tones to your dish. It’s a favorite in baking and best employed in lighter, warmer-weather dishes, something that may contain ample amounts of fresh herbs and vegetables. It’s also popular for seafood, as I’ve seen it used in a few cured salmon recipes.

Made from agave, tequila offers a sweeter tone to dishes. Flavor profiles will vary from lighter blanco variations to darker, smokier reposado offerings—properties that are important to consider when using for cooking. Lighter-colored tequilas may pair better with fish and white-flesh birds, while darker-color tequilas may boost flavor of darker meats, like big game or waterfowl. Still, it’s your choice, and this is a fairly versatile spirit worth experimenting with.

Read Next: What’s Better for Cooking Wild Game: The Grill or Cast Iron?

The Sweetness of Rum

Even sweeter than tequila since it’s usually made with molasses, rum is most often used in baking but can be put to work in other savory and sweet recipes. The same rule of color applies: Aged and dark rums work well with strong flavors such as beef stews or pork, while white rums are often used for seafood or poultry.

Some vodka lovers may disagree with me here, but the truth is Vodka is flavorless. Perhaps there are some differences when drinking it, but when it comes to cooking, vodka is used as an emulsifier and flavor unlock-er. According to Bart Saracino, co-owner of the Bartolino’s Restaurants, “Vodka adds depth to a sauce both by pulling out additional flavor and concentrating others without adding a flavor of its own.”

Vodka, through chemistry many of cooks will never understand, unlocks flavor potential in many ingredients, specifically those used in Italian cooking. It’s similar to salt in terms of revealing depth of flavor, but in a different way and different form. Vodka is also a binder that prevents cream from separating, so it’s perfect for pasta sauces involving both cream and acidic ingredients, like tomatoes (hence “Vodka sauce.”)