Alligator hunting season in Florida is officially in full swing 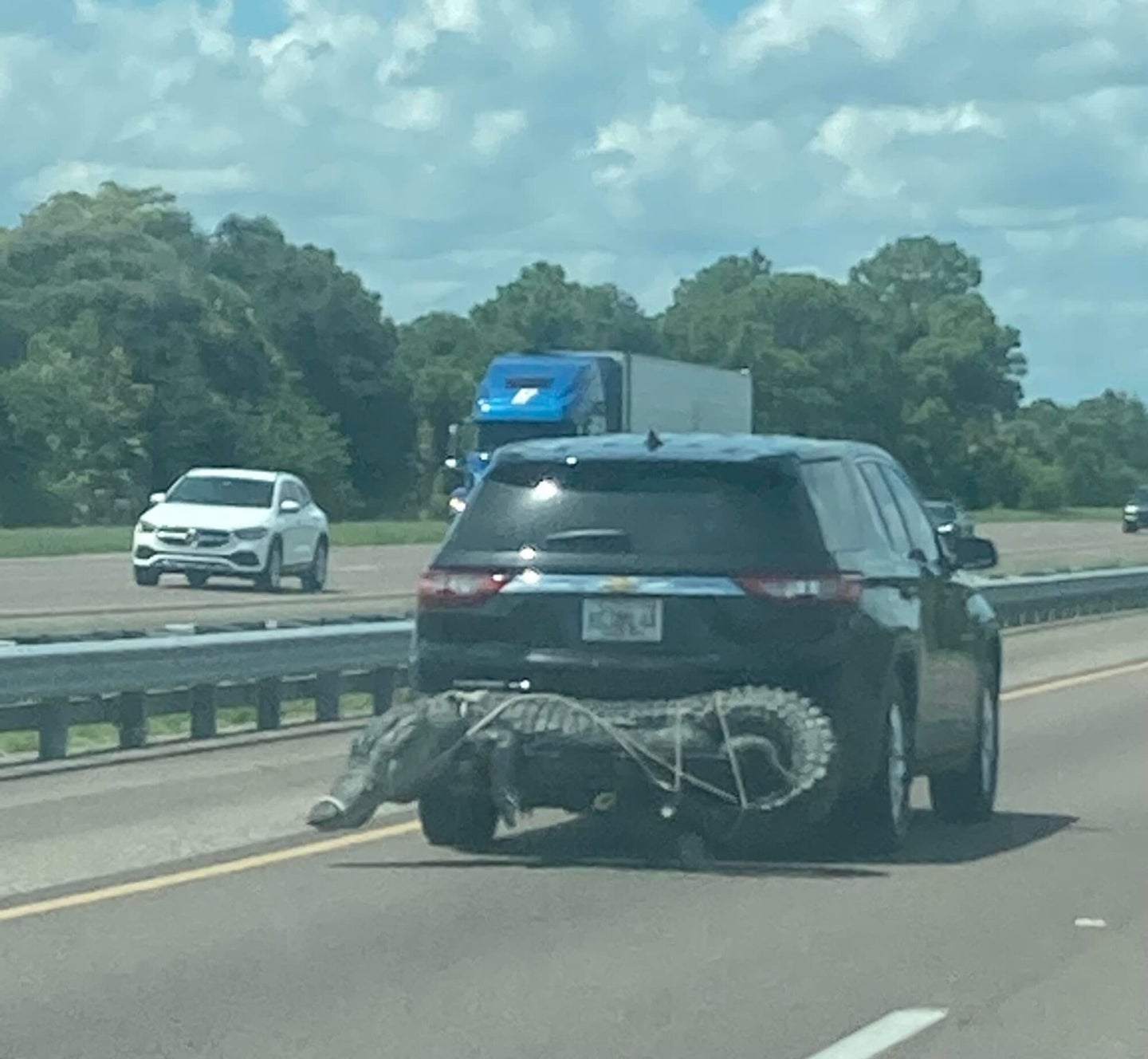 Karen Kress couldn't believe her eyes when she saw what was hanging out in the fast lane. Karen Kress / Facebook
SHARE

A new Chevy Traverse measures 79 inches wide on the outside and about 60 inches wide in the interior. That’s not quite wide enough to comfortably fit this huge alligator in the trunk, so this driver apparently had no choice but to tie it to the rear bumper. This method can’t quite be called “hogtying” since the feet are still free, but maneuvering the rope to somehow strap the snout to the tail should have a name of its own.

Karen Kress posted this image to her Facebook on Sept. 4, after seeing the spectacle on I-95 the day before. Alligator season in Florida runs from Aug. 15 to the morning of Nov. 1. It’s worth noting that Kress works as the director of transportation and planning for the Tampa Downtown Partnership, so if anyone knows a thing or two about optimizing transportation, it’s her.

“Definitely disbelief!” Kress told the Miami Herald of her reaction to the incident. “I moved here 30 years ago because of the nature and never tire of seeing an alligator. However, [I] never expected … to spot one on the interstate!”

Although there’s historically been much discussion among deer hunters about the advisability of strapping deer to vehicles as a diplomatic nod to the non-hunting public, this incident seems to be causing less of a stir. Floridians are used to seeing much worse, after all. Kress shared that although she’s a vegetarian, she wasn’t much disturbed by the sight.

“I don’t have a problem if this was a permitted legal hunt,” she said.

Florida’s alligator population totals around 1.3 million according to the Florida Fish and Wildlife Conservation Commission. The agency runs a Nuisance Alligator Hotline where people can report potentially problematic gators, which Florida has been dealing with more and more in recent years. For the 2022 hunting season, huntable hours were extended from the previous night shift (5 p.m. to 10 a.m.) to 24 hours a day to give people more daylight hours to hunt.

The average size of a male alligator is 11.2 feet, but based on the width of the car, we’re going to estimate this guy comes in at a little less than that, maybe around 10 to 10.5 feet. With that said, it’s hard to ignore how big his head looks.

As is the case with any viral Facebook post, the comments section on Kress’ photo became the breeding grounds for some great jokes about pool floats, rescued pets, and “tailgators.” But one commenter kept it simple and probably won the caption contest: